Imperialist Plunder of Philippine Agriculture: A research on the expansion of plantations through agribusiness venture arrangements in Mindanao (IPPA) by the Unyon Ng Mga Manggagawa sa Agrikultura (UMA- Union of Agricultural Farmworkers) was launched on September 26, 2019 at the University of the Philippines-Center for International Studies along with Global Climate Strike Diliman’s Bagsakan: A Farmers Market. The book offers direct and comprehensive answers on various questions and debates on development. Organized movements of farmers are often viewed as a group of people whose stakes are an obstruction to development, especially when asserting their right to the land they till and opposing foreign capital-driven “development projects” sponsored by government. There are too many aspects of food production that escape our dining tables. IPPA is a compelling reading for those of us who are reflecting or are curious on any of the following questions:

2. What is wrong with foreign direct investments leading and controlling Philippine agricultural development? What is the government’s role in the empowerment of transnational corporations? Are foreign investments our only hope in making vast tracks of land in Mindanao productive?

3. What actually happens to Filipino peasants who remain landless and have no choice but to work for agribusiness arrangements? Are their working conditions as good as the products they make, which foreign companies export for a cheap price in the global North?

4. What happens in the course of production? Why are unions of farmers and organizations of indigenous peoples, especially the Lumad, lamenting the impact of agrochemical TNCs and poison in plantations? What is wrong with TNCs like Dole and Del Monte forcing our farmers to embrace mono-cropping? The book’s discussion on agrochemicals and its impact on plantation will make the reader question “pinoy pride,” the kind that we associate with the products we export by “tireless, happy and smiling Pinoy farmers.” 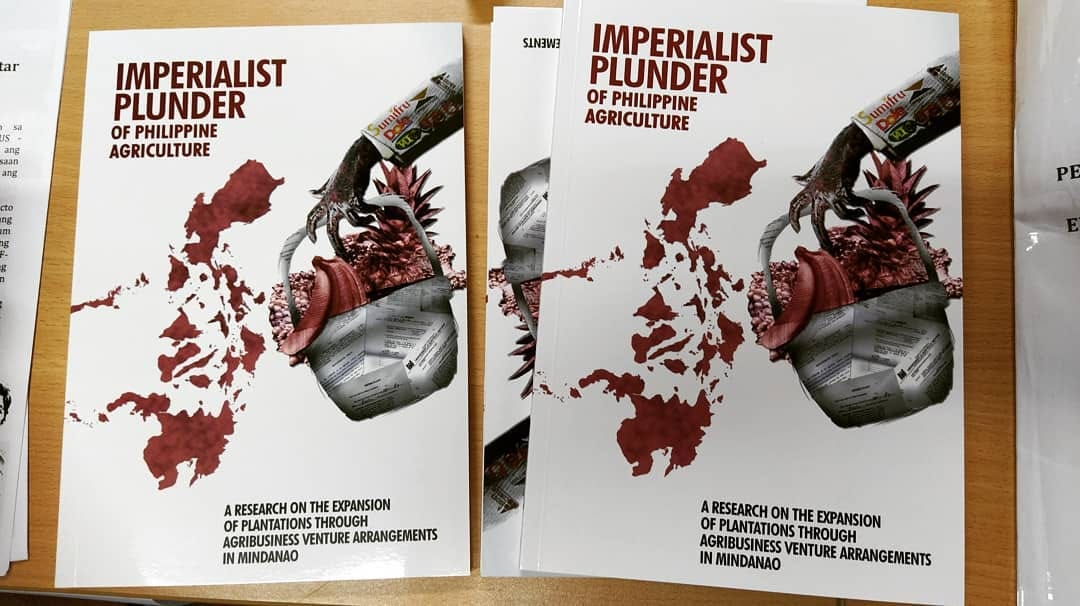 IPPA is an excellent research on what goes on behind food production for export. This process involves cheap products and cheap labor. The book devotes substantial discussion and analysis on the dynamics and impact of cheap labor. And here we learn that cheap labor is oppressed and exploited labor of historical victims of land grabbing. Our farm workers are descendants of tillers whose right to land has yet to be realized.

What really makes this book a must-read is its unique emplacement of exploited labor. We usually call this contextualization. But I use the term emplacement to emphasize how IPPA provides a sense of place, which involves the various mechanisms in which devastating impacts on agribusiness ventures happens. IPPA links the degradation of the soil through agrochemicals to state policies of land conversion and processes of land re-concentration or how land supposedly redistributed through land reform is recaptured by local oligarchs.

Land reform is also evaded through various means, and the most effective of which is through agribusiness venture arrangements (AVAs), which is the focal point of the book. A very revealing picture of how corporations have distorted and corrupted autonomous association of farmers or farmers cooperatives is also discussed comprehensively. The book exposes very clearly a model of development in the interest of global ruling elite extracting super profits through the triad— foreign capital, government, and local oligarchs.

A climate justice campaign is raging across the world. Greta Thunberg wants us to “panic as if our house in on fire,” which means we need to act fast and decisively to save Mother Earth. Yet for the most part of what may count for “environmental education,” nature is introduced as an entity external to our bodies— tree, sky, air, river, the sea, and ocean. We are made to imagine Mother Earth as a set of passive entities that we can either protect or damage. Between protection and destruction we can choose to consume Mother Earth wisely and in moderation. But that is too far from acting as if our house is on fire.

Responding to the climate crisis based on the experience of the peoples of the global South is largely about urgently saving ourselves from plunderous politicians and capitalists. It entails empathy for the conditions to which the most hardworking and oppressed peoples are subjected for the longest time. For “the tradition of the oppressed teaches us that the “state of emergency” in which we live is not the exception but the rule (Benjamin:1940).” Empathy with the working poor is a good place to start in terms of subverting the rulers.

This book comes out at the right time. It speaks of how Filipino farmers and their advocates can actually arouse, organize, mobilize through various means, including the publication of a research on the impact of agribusiness venture agreements. The book shows how the problem of imperialist plunder is indeed an urgent issue as it is the biggest driver of climate change.

Karl Marx talked about primitive accumulation as the original source of profits used by capitalists to advance capitalist accumulation. Yet Marx is often accused of being unable to perceive the phenomenon of imperialism, especially the transfer of value from the Third World to metropolitan centers. Patnaik disproves this criticism in a discussion of Marx’s letter dated February 19, 1881 to a renowned Narodnik economist NF Danielson in which the former emphatically talks about the “drain for surplus” from India to Britain. Marx laments how this drain of surplus “amounts to more than the total sum of income of the sixty millions of agricultural and industrial laborers of India!” Marx adds, “this is a bleeding process with a vengeance! The famine years are pressing each other and in dimensions till now not yet suspected in Europe!”

Marx’s letter was written in 1881. This book published in 2019 shows that Marx’s primitive accumulation or the origins of the accumulation of profit for the West is not a primitive phenomenon or a thing of the past. It remains to be the primary source of accumulation. Primary accumulation takes the form of imperialist plunder damaging our environment and dispossessing our farmers and indigenous population. It is a pervasive phenomenon in the Philippines and in the global South. Dispossession happens through slave wages, displacement, land grabbing, militarization, and killings of farmers. Dispossession means drought, flooding, the destruction of the soil, food insecurity, and the so-called rice crisis. Imperialist plunder as the primary source of profit making in our times is none other than the drain of surplus from the Philippines to the global North. Imperialist plunder is at the heart of the climate crisis.

IPPA is an important publication that will make its readers understand at least three urgent matters : 1) how and why “our house is on fire;” 2) the link between imperialist plunder and the climate crisis from a global South perspective; 3) what farmers organizations have done to empower themselves and how we may forge solidarity with Filipino farmers.

(IPPA is available at the University of the Philippines-Center for International Studies, Benton Hall UP Diliman)

Sarah Raymundo is a full-time faculty at the University of the Philippines-Diliman Center for International Studies. She is engaged in activist work in BAYAN (The New Patriotic Alliance), the International League of Peoples’ Struggles, and Chair of the Philippines-Bolivarian Venezuela Friendship Association. She is a member of the Editorial Board of the Journal for Labor and Society (LANDS) and Interface: Journal of/and for Social Movements.