“In these times, those who do good and stand for what is right are persecuted. It [this administration] is sowing fear because it rules by fear. This must be opposed in whatever form and whenever it occurs.”

MANILA — An activist doctor and professor received death threats a few hours after joining a protest demanding a bigger budget for the Philippine General Hospital (PGH).

Dr. Gene Nisperos, president of the All UP Academic Employees Union-Manila Chapter (AUPAEU-Manila), received a text message Monday night, October 21, saying he and his family would be killed soon.

“I know where your condominium is. We will get your family one by one…You are dead by…including your children and wife,” the message read. 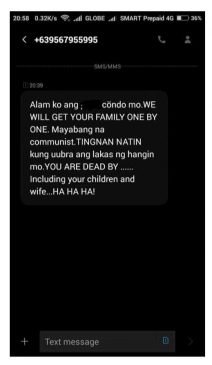 The message was sent by an unidentified person through mobile phone number +639567955995.

Nisperos blamed the climate of violence created by the Rodrigo Duterte government against those who seek substantial reforms and genuine change in Philippine society for the latest threats against him and his wife, also a doctor.

“In these times, those who do good and stand for what is right are persecuted. It [this administration] is sowing fear because it rules by fear. This must be opposed in whatever form and whenever it occurs,” Nisperos told Kodao.

As he was being interviewed by Kodao, Nisperos received another threat from the same number Tuesday morning.

A graduate of UP College of Medicine’s prestigious Intarmed program, Nisperos and wife, Dr. Julie Caguiat, served as community doctors in Mindanao before returning to Manila to advocate for community-based health programs in the national level.

Nisperos is an assistant professor who teaches Community Medicine in UP Manila. 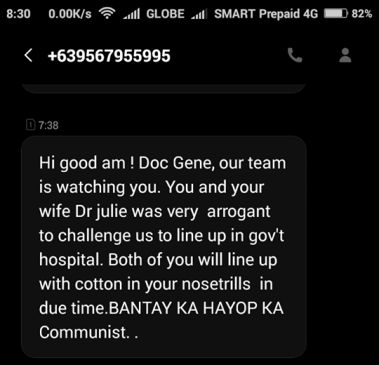 The AUPAEU-Manila condemned the most recent death threats against Nisperos and family.

The union said the threat comes at a time when the AUPAEU-Manila is calling on all faculty, administrative staff, and researchers of the university to unite against the impending budget cut for the University of the Philippines, particularly on the UP Manila and Philippine General Hospital (PGH), and to campaign for the regularization of contractual workers, among others.

The union said the threats are attempts to sow fear among teachers and unionists who assert for their rights and to fight for a higher state subsidy for social services such as education and health.

“[O]ur Union will not tremble in the face of vicious repressive measures and increasingly fascist attacks by this administration,” AUPAEU-Manila said. (Kodao Productions/