You Are Here: Home → 2019 → October → 24 → Is the drug war undermining the gains of government anti-poverty programs?

Is the drug war undermining the gains of government anti-poverty programs? 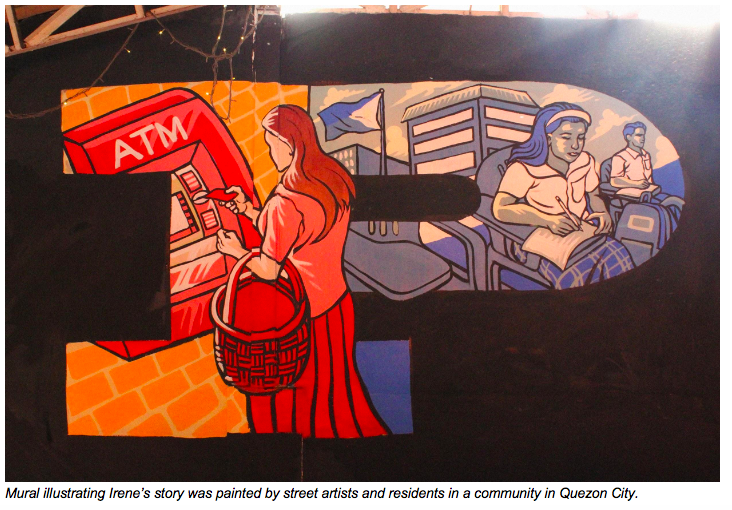 At least one in five victims of drug-related killings in Metro Manila in 2016 and 2017 were beneficiaries of the Pantawid Pamilyang Pilipino Program (4Ps).

Written by Mixkaela Villalon
Funded by the PCIJ Story Project
Reposted by   Bulatlat.com

This is a two-part report. Read the second part here.

MANILA — For the past six years, Irene, a domestic helper and mother of five who lives in a shanty in Marikina, has been getting P1,500 a month from the government’s poverty reduction program known as 4Ps, short for the Pantawid Pamilyang Pilipino Program.

Now in her mid-40s, Irene uses that money, a form of conditional cash transfer, to pay for the school expenses of her two children in high school because she and her husband, Gerry, a mason, barely made enough to keep the family housed and fed. (Irene and Gerry’s real names are not used in this story in order to protect the family’s safety).

Since its pilot in 2007, the 4Ps program, available to the poorest 20 percent of Filipinos, has covered some 4.4 million households with the intent of keeping their children healthy and in school. In the past decade, the government, with the help of foreign donors like the World Bank and the Asian Development Bank, has invested nearly P560 billion into the program. To date, some 12 million children have been able to go to school thanks to 4Ps.  In 2015, the World Bank said it was one of the best targeted social safety net programs in the world.

Gerry and Irene had high hopes that 4Ps would allow their children to have better lives. Irene did her best to meet the conditions for staying in the program, such as making sure the children did not miss school.
But on the evening of February 7, 2017, Gerry, who struggled for years to overcome his shabu habit, was killed by unknown assailants while he was eating at a neighborhood goto stall in Marikina City.

For the past two years, PCIJ been doing field and database research on 4Ps and the drug war.  PCIJ’s research shows that at least one in five victims of drug-related killings in Metro Manila in 2016 and 2017 were 4Ps beneficiaries.

PCIJ spent 18 months collecting the names and addresses of nearly 2,000 drug war casualties in the capital. Data then were showed to researchers at the National Capital Region office of the Department of Social Welfare and Development (DSWD), the agency administering the 4Ps program, and asked them to match the names collected with the families enrolled in the 4Ps program.

To make sure the matches were correct, PCIJ visited the homes of the victims’ families in four cities in Metro Manila and requested the families to present their 4Ps household IDs. At least 333 out of 1,893 casualties on PCIJ list were 4Ps beneficiaries. Twelve of these cases had multiple drug war victims within the same family.

This casualty list is incomplete. The police say they have killed an estimated 5,500 drug suspects in police operations since July 2016.   As of March 2019, nearly 30,000 killings are under investigation, a good number of which are drug-related.

Gerry was one of them. 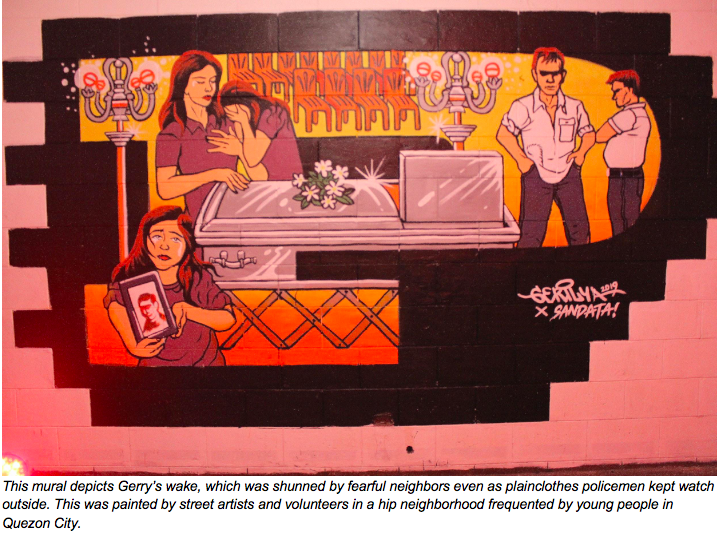 Irene didn’t approve of Gerry’s shabu habit. The family had enough problems without his drug-user friends hanging around their shanty. One day, Irene finally put her foot down. Keep your shabu friends away or I will take the children and we will leave you, she said.

Four years ago, the couple separated. With her two teenage daughters, Irene moved to a house a few streets away. Still she and Gerry often checked on each other and Gerry continued to provide for his family.
Gerry’s addiction was known to the neighbors and he feared being swept up in President Duterte’s anti-drug campaign, so he surrendered to the barangay during the first wave of Oplan Tokhang in late 2016. Irene regrets the surrender. She suspects it put him on the radar of police and barangay officials, who were already closely monitoring the family’s progress as part of the 4P’s program.

The barangay implements the 4Ps program. Its officials help select and monitor grantees, whose names, addresses, and family histories are recorded so the government can track their progress and check whether they meet the conditions for receiving aid. If children drop out of school, for example, families lose the monthly allowance they get for each child.

Over the years, these officials have gotten to know the 4Ps grantees well. They know who are using or peddling shabu. When the Duterte administration implemented the drug campaign two years ago, the same barangay officials also became responsible for compiling drug watchlists that were often shared with the police.

At Gerry’s wake, policemen in plainclothes circled the area. Neighbors and friends who were there recognized the men and the guns bulging beneath their shirts. That spooked the visitors, and soon everyone kept away, afraid to be associated with Gerry and his family.

At the wake, barangay tanod (village security) and police investigators questioned Irene about Gerry’s drug use. “How should I answer?,” she said in Filipino,“What’s the point? My husband is dead and nothing will bring him back.”

Picking up the pieces 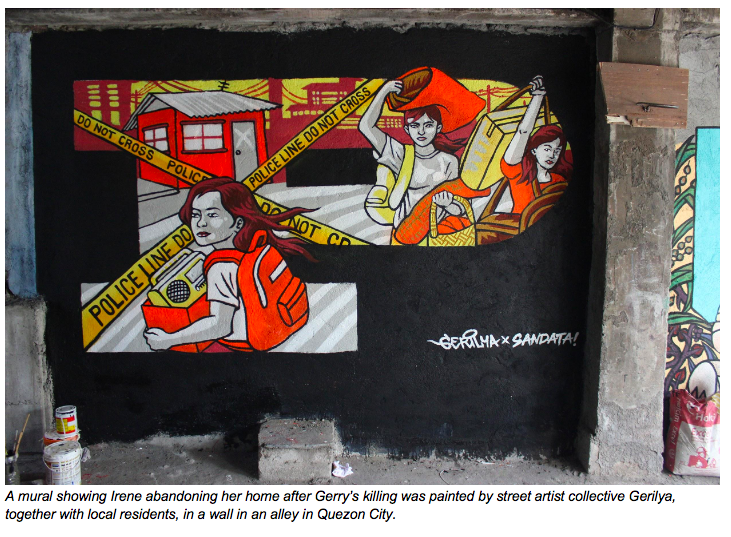 After Gerry’s death, Irene was forced to abandon her home. The police had tagged it a drug den, and she was afraid her family would be a target. She moved again, farther away. She was scared, she said, because it was not uncommon for police or bonnet-wearing assassins to return to the scene of a drug killing and target people they suspect to be associated with the dead.

Irene has many regrets. When Gerry surrendered, she wanted to send him to a rehabilitation program, but a barangay official advised against it. “Why don’t you just do the rehab at home? He will be mad at you if you have him committed to a rehab center.”

So Gerry was left to his own devices to beat his addiction. He was making progress, but it was slow. “It takes a long time if you do it by yourself,” Irene said.

But why did they kill him, she asks? Gerry was not a drug peddler. He had already surrendered. He was getting better. Did her neighbors rat him out? Were the barangay tanod and neighborhood policemen involved?

There is an overlap between tokhang victims and 4Ps beneficiaries, Irene said. Was the anti-poverty program’s information also being used to target drug suspects?

Each month for the past four years, Irene has been meeting with other 4Ps recipients in the barangay hall. The 4Ps program uses these monthly meetings to strengthen involvement in the antipoverty program.

But when the drug war happened, the community was divided. Shabu users were ostracized, their children bullied. Many neighbors avoided being associated with those targeted by the police for fear they would be caught in the police’s dragnet as well.

Today, Irene is wary when she speaks with neighbors and friends. She no longer knows whom to trust. 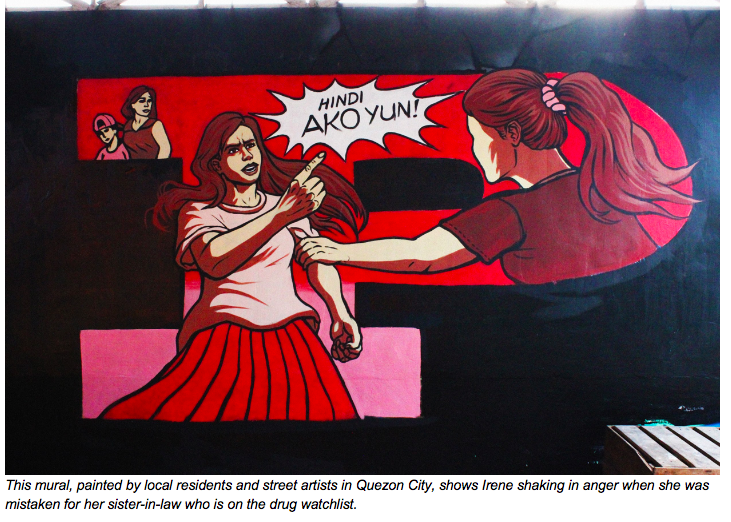 Even when Gerry was alive and he was the family’s breadwinner, money was always tight. The money from 4Ps barely covered the children’s school and food costs.

After Gerry’s death, Irene was left alone to fend for two daughters aged 15 and 18 who are still studying while her older children have families of their own. Irene works odd jobs like babysitting her neighbor’s children, doing laundry, or watching over a store in the nearby wet market.

Irene’s daughters refused to go to school after schoolmates bullied them. Their father, their classmates said, was a shabu addict. Irene was quick to defend Gerry. “There are many addicts here but your papa was not like them, he never caused anyone any trouble. He never asked anyone for money.”

Instead of school, Irene enrolled her children in twice-a-week classes in the Alternative Learning System (ALS) but it would take time before their records in the 4Ps can be updated and they can be monitored for education compliance. But because they dropped out, they can no longer receive 4Ps grants for education until their attendance to ALS is monitored by the 4Ps program.

Instead, Irene’s family receives P500 from the Family Development Program, P200 from the post-TRAIN Law Unconditional Cash Transfer, and P600  in rice subsidy per month. Irene wishes her children can return to a regular high school and not just because they can use the extra money. She worries they are not getting sufficient instruction, and without school friends, they would be missing the best years of their lives.

These days, Irene lives in fear. Once, a barangay councilor called out to her from across the street. “Linda!” she shouted.

Irene was frantic. She shouted and cursed, “That’s not me.” Linda is Gerry’s sister, who is of a similar height and build. Linda was a drug user who had since gone into hiding. Irene is afraid she would be mistaken for her sister-in-law. “You never know who’s listening,” she says. She is nervous when she is with neighbors, suspicious of the people she passes on the street. For Irene and others like her, the trauma from the loss of their loved ones linger long after their deaths.

Two years after Gerry was gunned down, Irene fears she will be killed in error. Who will care for her daughters when she is gone? — PCIJ, October 2019 / Reposted by