You Are Here: Home → 2019 → November → 3 → Quest for justice continues for kin of the disappeared

Quest for justice continues for kin of the disappeared

“Nobody deserves this unending longing and pain.” 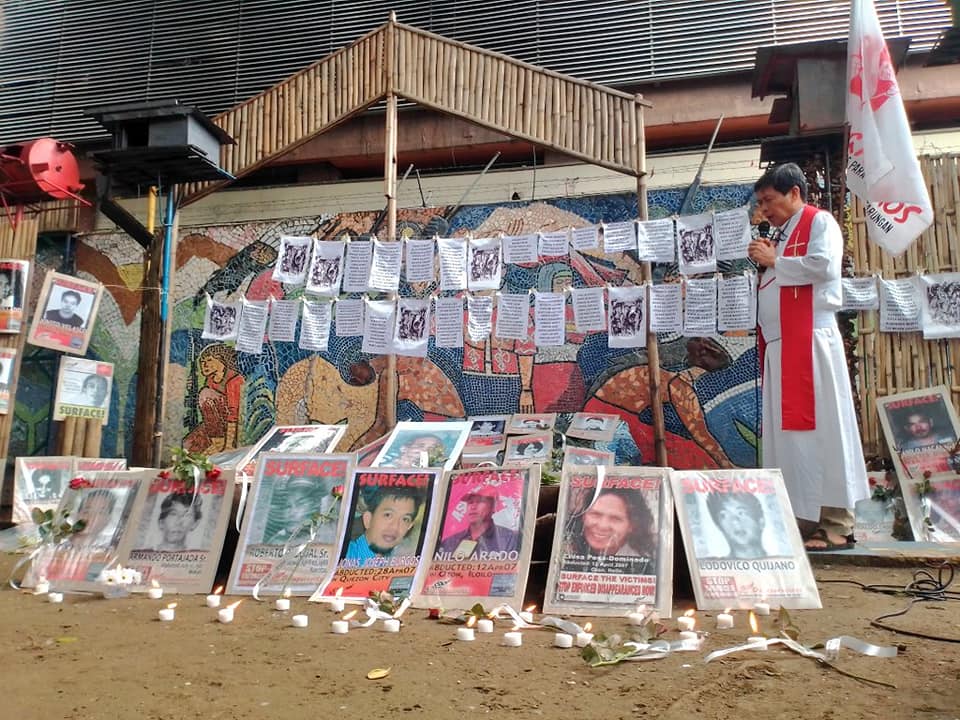 MANILA – Relatives of the disappeared have once again gathered on Nov. 2 at the Bantayog ng mga Desaparecido at the National Shrine of Our Mother of Perpetual Help, Baclaran for their yearly traditional commemoration of All Soul’s Day.

They carried not only candles and flowers to offer their missing loved ones but also their resolute hope to be reunited with them one day. The Desaparecidos – Families of the Disappeared for Justice, led the commemoration. 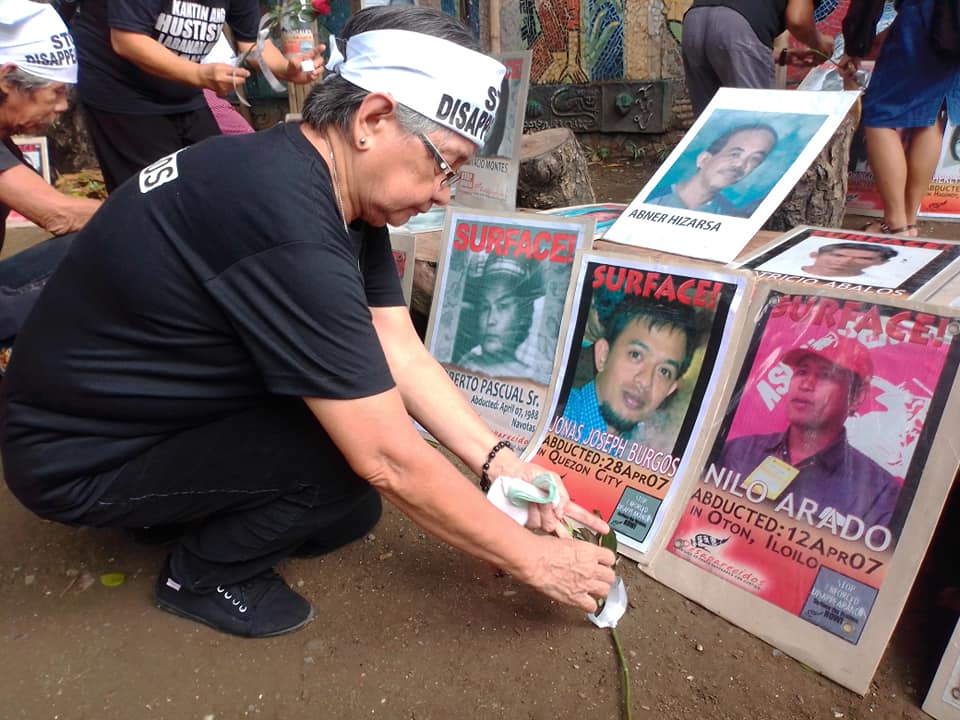 “I scream for every second of my life: where is my daughter? Where is Sherlyn Cadapan? It is not enough that the butcher Palaparan and his two military companions would rot in jail. As long as they do not surface my Sherlyn whom they abused, raped, violated, dehumanized, and hurt, I would not stop searching for her,” said Cadapan, chairperson of Desaparecidos.

Last year, Palparan and two other army officials were found guilty of kidnapping and serious illegal detention over the disappearance of Sherlyn and Karen Empaño. They were sentenced to up to 40 years in prison.

Connie Empeño, mother of Karen, also described the past 13 years of searching for Karen as mental torture. 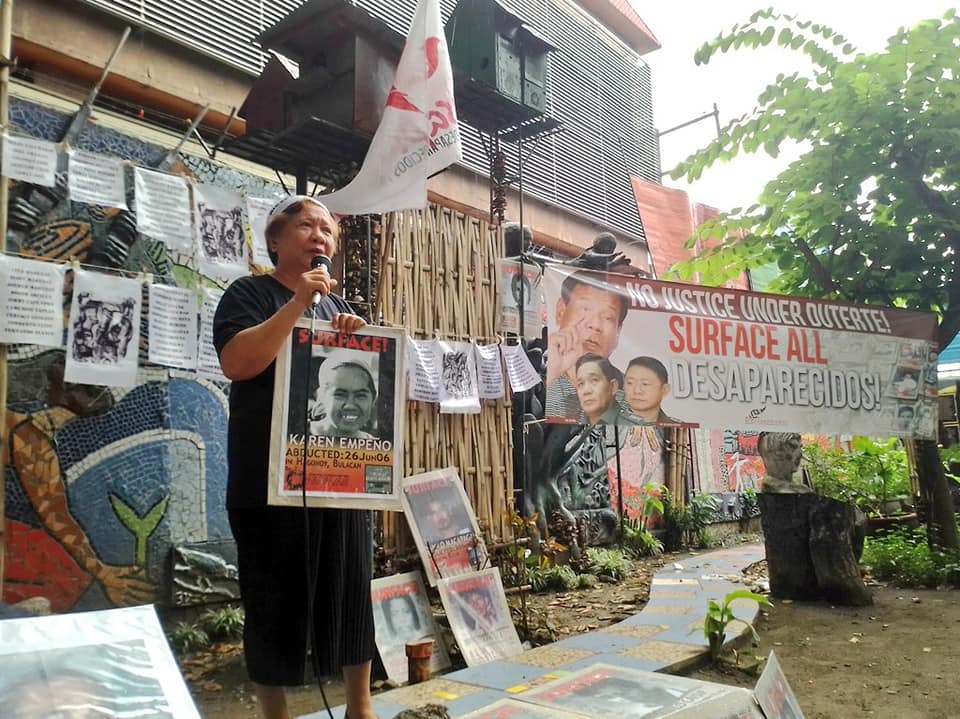 “Even if the ‘butcher’ Palparan and his two accomplices are already behind bars, it will never quench our longing for Karen. I am asking the state to surface Karen Empeño, Sherlyn Cadapan, and all those who have been abducted by state forces who remain missing to this day,” said Empeño.

Karen and Sherlyn are UP students and activists who went missing on June 26, 2006, in Hagonoy, Bulacan after being abducted by soldiers under Palparan.

The Desaparecidos pointed out that enforced disappearance is among the worst form of rights violations. They said they do not want anyone to experience what they have gone through.

“Nobody deserves this unending longing and pain. Our missing loved ones are good people. They are brilliant and they stood for people’s rights. Today, we light candles in their memory – – an indication that the fight for justice is far from over,” Cadapan ended. 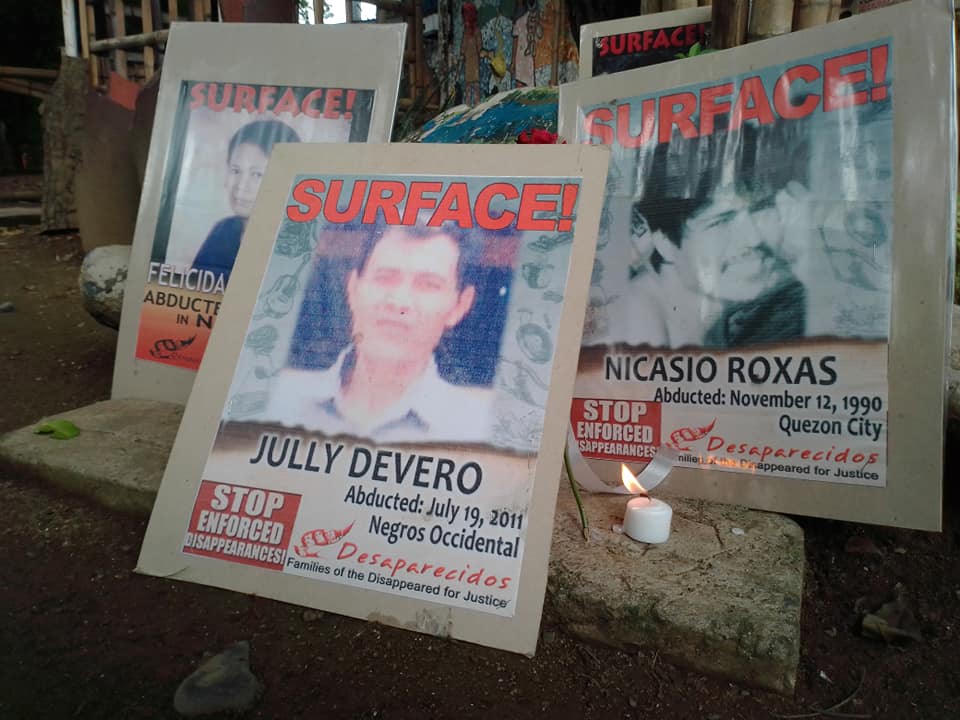 Under President Duterte, Karapatan has documented at least six cases of disappearances. The latest case was the disappearance of activist and peasant organizer in Central Luzon, Joey Torres Sr. on Sept. 22, 2018.

Reylan Vergara, vice chairperson of Karapatan enjoined the families to remain united as rights violations continue under President Duterte’s administration. He said as long as problems plaguing the Filipinos are not addressed there is resistance and when there is resistance there is oppression.

“We have to unite and fight for justice. We know it is elusive. But no matter how long (the struggle is), we know that we can attain justice if we are united and steadfast in fighting for it,” he said.