You Are Here: Home → 2020 → January → 8 → Australia wildfires seen as strong warning on the impacts of climate change 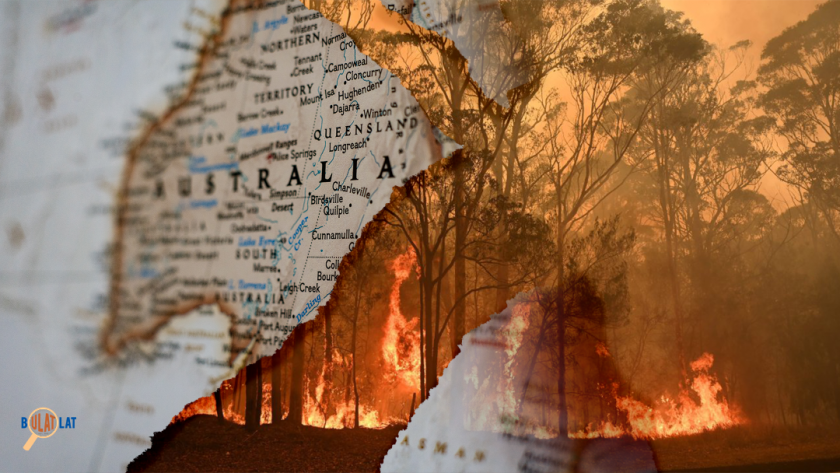 “The unprecedented Australian bush fires is the strongest warning yet that the impacts of climate change we thought we will be facing 20 or 50 years later is already a catastrophic reality today.”

MANILA — Local environmental group Kalikasan People’s Network for the Environment expressed solidarity with the people of Australia who were experiencing the bushfires that started September last year.

“We stand especially with the Filipino migrant communities that are affected by the fires and haze,” said Leon Dulce, national coordinator of Kalikasan.

The fire which was expected to continue without letup anytime soon, already killed 24 people stretching up to 15.6 million acres and destroyed more than 1,400 homes.

“The unprecedented Australian bush fires is the strongest warning yet that the impacts of climate change we thought we will be facing 20 or 50 years later is already a catastrophic reality today,” Dulce said.

He cited the Garnaut Climate Change Review in 2008 and says it has already predicted that the shift in fire weather patterns and intensity would manifest this year. He further added that public authorities could have had more time to plan and address the risks “but willfully ignored the warnings.”

Australia’s Prime Minister Scott Morrison has been under fire in social media for taking a vacation in Hawaii while his country was ablaze.

In a video posted in social media, he can be seen being heckled by his people while visiting them weeks after due to his lack of action.

As of the writing, Australia still has not issued a state of emergency.

The Philippines, meanwhile, was also not spared by the worsening effects of climate change.

Early December last year, Cagayan Valley suffered heavily of flashfloods due to heavy rains brought by the combined effects of northeast monsoon and the tail-end of cold front.

The National Disaster Risk Reduction and Management Council (NDRRMC) reported a total of 10,770 persons from more than 2,000 families have been affected in 40 barangays in Cagayan Valley and Cordillera Administrative Region.

Thus, Dulce noted that the country must learn from what has climate change already transpired particularly from the fires in Australia and Amazon, the melting of ice in Greenlands, and from the devastating wounds Typhoon Haiyan did to us.

“As a consistent ranker in the world’s most climate vulnerable countries, we are very much prone to both slow-onset and sudden climate shocks,” he said.

“The clock is ticking for the Philippines as our archipelagic country is very much exposed to these climate impacts,” Dulce warned.

He then stated the urge for a Climate Emergency Declaration to create mechanisms to hold accountable the world’s current and historic top polluters as “our world, as we have seen in Australia, will literally burn down if we don’t act now.”