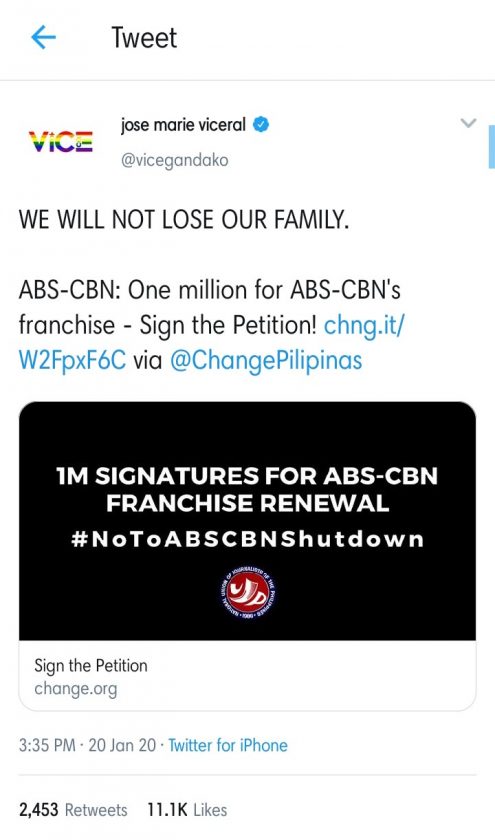 “We will not lose our family.” — Vice Ganda

MANILA– A week after the launch of the signature campaign for ABS-CBN’s franchise renewal, celebrities poured out their support. .

ABS-CBN stars have started to speak about about the issue and showed their support by urging their fans to sign the online petition initiated by the National Union of Journalists of the Philippines (NUJP).

Broadway star Lea Salonga, nontime show hosts Anne Curtis and Vice Ganda, as well as singer-songwriter Ogie Alcasid and artist Mark Agustin turned to Twitter to urged their supporters to join the signature campaign. Vice Ganda is considered one of the top influencers on social media with 13.5 million followers on Twitter.

Yes, I have personal and professional reasons for this one. Not gonna lie. https://t.co/tuj4QWvquu

WE WILL NOT LOSE OUR FAMILY.

ABS-CBN: One million for ABS-CBN’s franchise – Sign the Petition! https://t.co/i0nr7Xnbgn via @ChangePilipinas

So many lives will be affected by the jobs that will be lost ?https://t.co/3KZZr8zhZS

Although the posts have elicited mixed reactions from their followers, the celebrities are firm on their stance for the continuation of the network’s franchise renewal. ABS-CBN’s franchise is set to expire in March this year and the House of Representatives, particularly the House Committee on Legislative Franchises, has yet to schedule hearings on ABS-CBN bills.

As of press time, the petition has gathered 149,308 signatures.

The NUJP will lead a silent protest and a candle lighting ceremony in front of the ABS-CBN Esguerra gate at 6 p.m. today. The group called on the House of Representatives to act on the pending measures for ABS-CBN franchise renewal.