Gender disparity in wages remains to this day, which ranges from four to 25 percent. The CWR cited “implicit biases” continue as capitalists discriminate women’s work as “just add-on to the entire household earnings.”

In its annual report titled “Ulat Lila,” the 37-year-old women-led research and advocacy group said women wage workers are employed in sectors with the lowest wages.

The CWR noted that minimum wage is way below the estimated family wage of P1,004 and a far cry from retail businesses’ daily income. The SM Retail Inc., for one, earned at least P31 million per day in 2018 while its minimum wage earners in Metro Manila only got a daily pittance of P537. 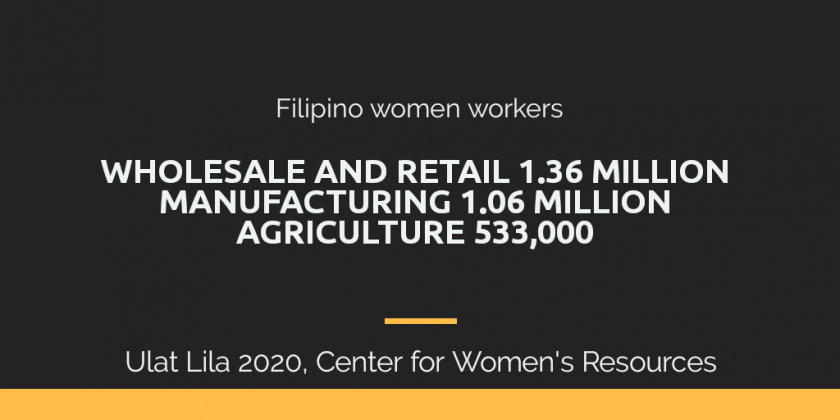 On an average, the CWR said women workers in the manufacturing sector get a daily wage of P374, while those in retail get P325, and at least P200 for those in agriculture.

Gender disparity in wages remains to this day, which ranges from four to 25 percent. The CWR cited “implicit biases” continue as capitalists discriminate women’s work as “just add-on to the entire household earnings.”

“The long standing issues of poverty, landlessness, joblessness, injustice, and inequality remain as long as the government depends on a neoliberal framework that puts value only on benefit and profit of the few and compromises the welfare of people,” said Jojo Guan, executive director of the Center for Women’s Resources.

Guan said the Duterte administration has yet to heed the women’s demand for change and instead pushed for “policies that not only exacerbated the poor living conditions of Filipino women, but also forthrightly attack them.”

Women workers’ low salary is aggravated with the prevalence of contractualization under the guise of flexible terms such as probationary, casual, contract-based, project-based, seasonal, and learners, according to CWR.

In the wholesale and retail trade industry alone, at least one out of five women workers is considered non-regulars.

The CWR noted that even women government workers do not have security of tenure. Hired as “job-orders” or “contract of service personnel,” at least 27 percent of the government’s workforce carry out the same workload as regular employees but without the hard-earned benefits that the latter are able to avail of.

Of these contractual government workers, four out of 10 are women.

With women still tied to their traditional role of being their families’ caretakers, they also carry the burden of providing for their families when much needed social services are lacking if not missing.

The CWR criticized the reduced budget for health and education.

To make ends meet, Filipino women either work overseas despite the “horror stories” of abuse and government neglect. Others put up micro-businesses despite having very little government support, usually involving access to loans for start-ups, said the CWR.

With the dire working conditions of Filipino women workers, their right to collectively struggle has been continually challenged as well.

Union organizing is also among the targets of the government’s National Task Force to End Local Communist Armed Conflict. In Central Luzon, a local government office has been set up against workers associations and union.