You Are Here: Home → 2020 → April → 1 → Arrests in QC reveal lack of gov’t support to lockdown-affected residents 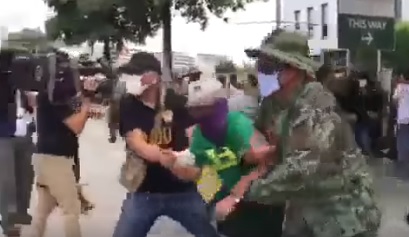 “The people are getting hungry. The answer to their fervent wish is simple. And yet they were violently dispersed and arrested all because this gathering is prohibited?”

MANILA — An urban poor group said the arrests of Quezon City residents reveal the gross lack of social services and compassion to those greatly affected in lockdown here in Metro Manila and the whole of Luzon amid the COVID-19 pandemic.

In a statement, Kadamay Chairperson Gloria Arellano said the Duterte administration would rather prioritize the rounding up of the urban poor than providing them with due social services. This morning, at least 21 residents were arrested after joining a spontaneous protest in front of their community, along major thoroughfare EDSA.

“They should immediately release the P8,000 aid they promised to the urban poor. This will provide them assistance. The longer the social services reach them, the more that their health will suffer, making them even more vulnerable to the disease,” said Arellano.

The Duterte administration said it will carry out a Social Amelioration Program, where they will provide financial aid ranging from P5,000 to P8,000 to at least 18 million households affected by COVID-19 pandemic. Village officials who will supposedly implement this on the ground, in news reports, said they have yet to receive guidelines from their higher-ups.

Human rights group Karapatan revealed how compassion for the poor is wanting under the Duterte administration. Its secretary general Cristina Palabay said mass arrests will not address the hunger caused by the government’s neglect of the people’s welfare.

“We demand the release of the arrested residents of Sitio San Roque. In failing to deliver on promises of socio-economic aid for the marginalized and meeting their demands with arrests, violence, and human rights violations, the Duterte administration is only exacerbating social unrest and the people’s discontent with his anti-poor and fascist rule,” Palabay said.

Arrested residents were reportedly brought to Camp Karingal in Quezon City. Authorities said they will be charged with violation of the Bayanihan Heal as One Act, disobedience, among others.

The arrests of Sitio San Roque residents have left groups both fuming and speechless.

“The people are getting hungry. The answer to their fervent wish is simple. And yet they were violently dispersed and arrested all because this gathering is prohibited?” said Manuel Baclagon, secretary general of government workers union group Courage.

Aid has yet to be provided to urban poor, more than a week since President Duterte sought and was eventually granted the emergency power to access at least P200 billion funds. Bayan Muna Rep. Ferdinand Gaite said that despite this, the “government has not stepped up its efforts.”

“It seems that the President and his men lack all sense of urgency, contrary to their bluster about how the military men-led national action plan would be efficient. They said this militarized implementing team would get things done, our question is when? he added.

Not initiated by Kadamay

Arellano belied earlier claims of the Department of Interior and Local Government that their organization, which has a local chapter in Sitio San Roque, initiated the protest action. This, Arellano said, is “peddling misinformation.”

They also belied that statements of a top police official who said that the protest action was initiated by their members from Pandi, Bulacan to supposedly incite chaos in Metro Manila. Arellano said that given the lockdown, it is impossible for Bulacan residents to go to Manila.

This, she added, is the problem when the government pays too much attention to so-called “obeying rules” without analyzing the problems confronting the people.

“From the very start of this pandemic, the Duterte administration has turned to military action as if there is a martial law in place. It is not surprising that people will mobilize to call out the government’s attention to address their hunger,” Arellano said.

So far, the Philippine police has arrest some 17,000 individuals amid the lockdown in Metro Manila and the whole of Luzon. This, Kadamay said, is in stark contrast to only about 3,000 Filipinos who have undergone COVID-19 tests.