What we could learn from Capitol Hill 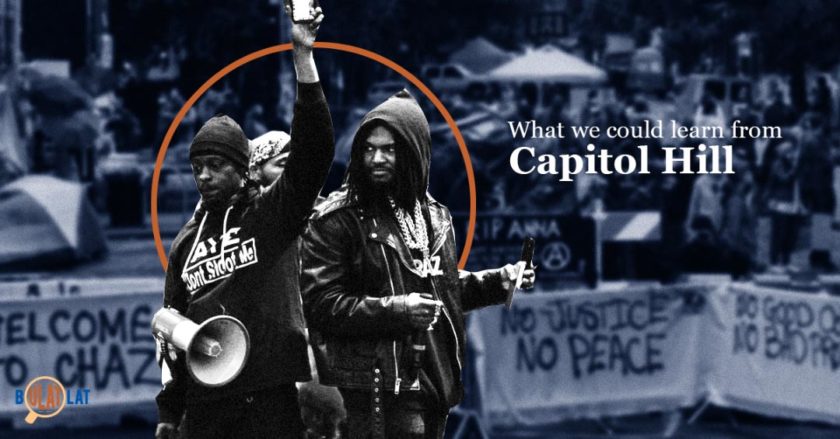 The challenge for American activists and organizers is to now elevate these contradictions towards the primary question of class struggle; something that hasn’t been done since the Black Panther Party of the 1960s.

MANILA — On June 8, thousands of American protesters occupied roughly six blocks in Seattle, Washington, barricaded the streets, and declared themselves autonomous. Today, the Capitol Hill Autonomous Zone has been described as anything from “a block party” to “filthy anarchists,” but one thing is clear – CHAZ is thriving.

The murder of George Floyd in the hands of police was what broke a system built on centuries of racism and capitalist exploitation. Nationwide protests have flared up all over the United States, unified under the call of “Black Lives Matter,” despite a global pandemic and increasing police violence tacitly sanctioned by President Trump himself.

As Filipinos, we tend to look at the BLM protests through an outsider’s lens. Although it is hard for us to grasp how just endemic racism is to American society, we can nonetheless learn a lot of
practical lessons from correctly analyzing the situation.

At the heart of the BLM protests are deeply ingrained contradictions in race relations, which seep to through facets of the American society. Police violence is colored by skin. Policies like redlining and segregation have contributed to racial sentiment and socio-economic inequality, and so on.

The challenge for American activists and organizers is to now elevate these contradictions towards the primary question of class struggle; something that hasn’t been done since the Black Panther Party of the 1960s. It would take a lot of work to regain that level of political maturity. Decades of fierce anti-communism and Cold War politics have reduced the “left” to mean “the Democratic Party,” while reformist social democrats like Bernie Sanders and Elizabeth Warren are considered “radical.” The few grassroots organizers, Marxists, and anarchists that remain are kept on the fringe of mainstream politics, scattered in local groups and internet “organizing.”

But regardless of the state of activism in the United States, something has definitely exploded in the mass consciousness. Thousands of protesters have awoken, painfully conscious of the inequality they face and are waging a spontaneous uprising. Which brings us back to Capitol Hill.

What is CHAZ? Not even the protesters themselves can answer the question.

At the very least, it was established as a safe space in Seattle, free from police or state intervention. There are barricades demarcating the borders of the zone, with volunteers at the post vetting people who want to enter. They have radios and some are carrying firearms.

There is no centralized leadership within CHAZ. Though some people like Raz Simone have risen up, decisions are still largely decentralized. Supplies largely come through donations, and the park serves as a community center for educational discussions and cultural performances.

Despite Trump’s insistence, CHAZ is not an attempt at secession. It’s a microcosm of the BLM protest movement – surviving in the rage of the moment, with so much potential, but without clear leadership. It could only exist because of the political power the protesters have taken for themselves thus far. What CHAZ, and the BLM protests in general, need now is strong leadership to advance the protests towards actual change.

Unlike the American mass movement, we have the benefit of a potent and organized political force. For more than 50 years, Filipino activists and organizers have forged a sense of political maturity through mass organizations, clear campaigns, and collective struggle.

It would do well for us to look at CHAZ and see it for what it is; as the mass movement taking clear shape. It’s not an entirely foreign concept to us – we are well-versed in both the art and the science of the protest camp, the ubiquitous kubol that we call our makeshift home.

The Philippines is in a situation not unlike the United States. The global pandemic has exposed all secondary contradictions in Philippine society: a socio-economic crisis, state abandonment, crises in education, labor, transportation, housing, and so on. Meanwhile, state fascism and terrorism run rampant through the Terror Bill, “counterinsurgency” plans, and press freedom violations.

We have the benefit of being politically mature enough to be able to connect these issues towards the more fundamental ills of Philippine society – imperialism, feudalism, and bureaucrat capitalism. Every day, the poorest Filipinos are being harassed and abused by the state in magnitudes above the fate suffered by George Floyd.

Let us look at CHAZ, and the American mass movement, and inspire ourselves to fight back. Let us invigorate ourselves with the militancy of “No justice, no peace,” and shout back: Makibaka, huwag matakot.