What happened before: Cyber libel in the Philippines 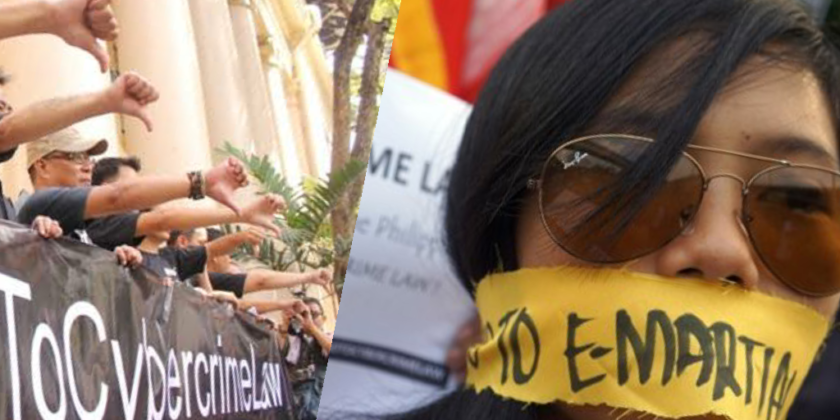 MANILA – The recent conviction of Rappler CEO Maria Ressa and former reporter-researcher Reynaldo Santos Jr. brought to the fore cyber libel as a weapon against journalists.

Republic Act No. 10175 or the Cybercrime Prevention Act of 2012 penalizes cyber libel.

Then President Benigno S. Aquino III defended the signing into law of the controversial Republic Act No. 10175, saying, “Will freedom of expression be stopped? I don’t think that is the purpose of the law.”

Critics pointed out existing laws were sufficient to penalize “acts of terrorism” defined in the RA 10175. They warned that the law will be used to stifle dissent and to harass not only government critics but also journalists and eagle-eyed netizens.

At that time, Bayan Secretary General Renato Reyes Jr. said, “This is a political and legal regression in terms of protecting free speech on the internet. Will we now have offenses such as inciting to sedition with the aid of a computer? Or rebellion committed via the internet? The potential for harassment suits against government critics is so huge under this law.”

Read: Anti-Cybercrime law, an attack against freedom of expression, other civil rights

At least 15 petitions were filed against the controversial law before the Supreme Court. Still, many provisions questioned were upheld as constitutional in a landmark decision in February 2014. The high court declared Section 4(c)(4), which penalized online libel, is not unconstitutional with respect to the original author of the post but unconstitutional only where it penalizes those who simply receive the post or react to it.”

Read: ‘Fight vs cybercrime law not over’ — netizens

Under the Duterte administration, what critics said became true.

Ressa and Santos were not the first journalists to be convicted of the crime.

On March 22, 2019, two radio broadcasters in Kidapawan City were convicted of online libel. North Cotabato Governor Emmylou “Lala” Taliño-Mendoza filed the charges against broadcasters Eric Rodinas, anchor of Radyo Natin and Larry Baja Subillaga Jr., a freelance broadcaster, over “malicious” statements posted in their social media accounts on March 14, 2017. The Philippine Daily Inquirer reported that Subillaga said via Facebook that the governor was fooling the people of the province while Rodinas said the governor became rich because of a project.

Judge Jose Tabosares of the Regional Trial Court, Branch 23, in Kidapawan City sentenced the two broadcasters two to four or eight years jail term and ordered them to pay P2.5 million in damages.

Cyber libel was also used to threaten a campus journalist who posted his criticisms to the government’s COVID-19 response.

The National Union of Journalists of the Philippines (NUJP) and Center for Media Freedom and Responsibility have long been calling for the decriminalization of libel.

Veteran journalist Inday Espina-Varona, said in 2014 after the SC upheld the constitutionality of cyber libel, “The criminal nature of libel in this country makes it the perfect tool of harassment (short of murder, which has also taken out so many Filipino journalists).”

CMFR said, “The libel provisions of the RPC [Revised Penal Code] have been problematic for free expression and press freedom since 1932, when the RPC was implemented, primarily because of the penalty of imprisonment, which has been used in many instances to silence journalists.”

Back then, Presidential Spokesperson Harry Roque sang a different tune. Roque, then with Centerlaw, criticized the SC decision, saying “failing to declare libel as unconstitutional is contrary to human rights law.”

Roque then said that no less than the U.N. Human Rights Committee has already declared that Philippine criminal libel law is contrary to Freedom of Expression. He was referring to the UN Human Rights Committee’s October 2011 decision stating that the Philippine criminal libel law is excessive and is in violation of the International Covenant on Civil and Political Rights in which the Philippines is a signatory.

It has gone full circle, it seems. But the people’s stand on this issue remains the same – criminal libel and cyberlibel have no rooms in a democracy.