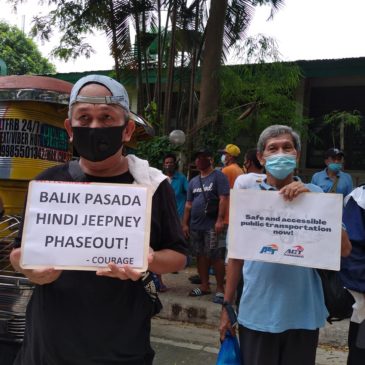 “Thousands of commuters are forced to use more expensive modes of transportation, walk or use bikes to go to work. The Duterte administration continues to have no plans to address the problems of our mass transport system which has gotten worse because of government incompetence during the COVID-19 pandemic.”

This is how jeepney drivers reach for our fare, but the palms then used for reaching payment and giving back change are now being used to beg for alms.

Thousands of jeepney drivers find it difficult to cope with the three-month lockdown as they have been prohibited to operate while they have not received ample financial assistance from government.

In an interview with Bulatlat, UP-Katipunan jeepney driver Rolly Tolentino, 51, narrated the hardships his family experienced since the mass transportation ban.

As the breadwinner and a father of three, Tolentino only received cash assistance from the government once. The cash aid, worth P8,000, was spent to pay for the family’s debts and bills.

With the cash aid spent after one week, another week of income loss awaits the family, and Tolentino worries about livelihood sustainability for his family.

Rolly Tolentino, 51, calls on government to allow them to operate their jeepneys so they could feed their families. pic.twitter.com/ORxtCVpVw7

[“How about our families? Our children? How do we sustain our living? Where will we get finances for our children’s schooling if our operations will not resume?”]

Tolentino is one of the many drivers who participated in the National Solidarity Day for Jeepney Drivers, where various groups provided hygiene kits and food relief for jeepney drivers.

In a statement, former Anakpawis Rep. Ariel Casilao lamented that jeepney drivers are being mentally tortured by the government by having their livelihood constantly in peril.

“The government is guilty of neglecting our jeepney drivers. LTFRB and Malacanang chose to play deaf and blind to the worsening plight of jeepney drivers who have resorted to begging to get a day’s need,” said Casilao.

Transport group Piston also criticized how the pandemic is being used to justify the phaseout of traditional jeepneys and pave the way for the e-jeepneys operated by big corporations.

One of the justifications of the looming jeepney phase-out is the danger of contracting coronavirus inside the jeepney, and the possible violation of the enforced social distancing measure.

However, Dr. Gene Nisperos of the Community Medicine and Development Foundation (Commend) debunked this, saying that traditional jeepneys are safer compared to modernized jeepneys.

Nisperos said it is relatively safer to ride a traditional open-air jeepney rather than the air conditioned and enclosed modernized jeepney.

Research group IBON Foundation echoed Nisperos and revealed that studies have indicated that open-air transport may have advantages over enclosed, air-conditioned transport in controlling the spread of COVID-19.

“With COVID-19 still spreading, traditional jeepneys have the advantage of being open-air, dissipating droplets with the virus faster, and lowering the risk of transmission. Yet the government’s narrow-minded focus on corporate-driven jeepney modernization threatens to forego this important built-in advantage in the mass transport system,” said IBON.

“Thousands of commuters are forced to use more expensive modes of transportation, walk or use bikes to go to work. The Duterte administration continues to have no plans to address the problems of our mass transport system which has gotten worse because of government incompetence during the COVID-19 pandemic,” said Castro.

To help support jeepney drivers, donation can be send through the following accounts: