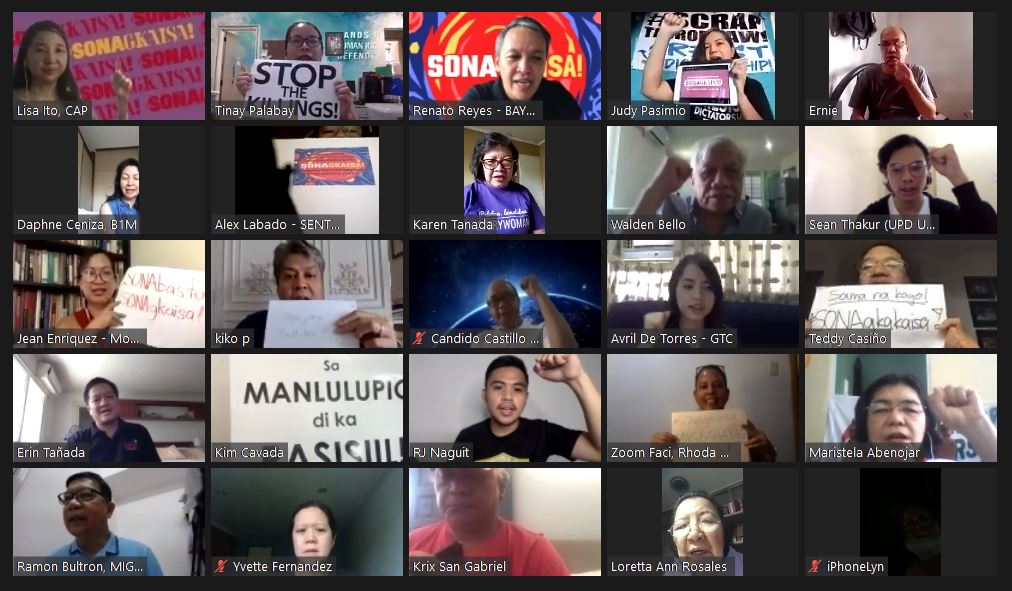 MANILA – More than a hundred groups are set to stage protests on July 27, Rodrigo Duterte’s State of the Nation Address (SONA).

In an online press conference this morning, July 17, Sen. Francis Pangilinan said the groups will come together to protest the slow and inadequate response of the government to the effects of the COVID-19 pandemic, signing of the Anti-Terrorism Act of 2020, the non-renewal of ABS-CBN franchise, unemployment, attacks on press freedom, among others.

Dubbed as #SONAgkaisa, Pangilinan said that such broad united front last happened some 20 years ago, and Duterte’s Anti-Terrorism Act has made it possible again.

In her statement sent from prison, Sen. Leila De Lima called on the public,“Stop this vindictive, murderous, power-hungry, morally-bankrupt and abusive regime from further inflicting sufferings on Filipinos! We cannot allow our country, a cradle of democracy, to fully become a pathocracy ruled by a psychopathic leader. Our countrymen do not deserve this kind of government who is oblivious to their needs and well-being.”

Former Chief Justice Maria Lourdes Sereno also called on to the people to unite and return to the good. She said that the president has “abandoned science, reason and God.”

“Now look where it has all brought us? Death, despair and destruction of the economy as well as the violation of human dignity,” Sereno said.

Several protests are lined up a week before Duterte’s SONA. A motorcade in solidarity with ABS-CBN will be held on Saturday, July 18 . The assembly point will be from two different points: Ayala Triangle and Quezon Memorial Circle and then will proceed to the ABS-CBN compound in Quezon City.

Sr. Mary John Mananzan, co-convenor of Movement Against Tyranny (MAT) encouraged everyone to show their rage by tying a red and black ribbon everywhere they can — black as to show resentment to all the wrongdoings of the government and red to show that they are fighting.

“I call on people who love our country, let us make this an embodiment of what our country is facing now. Let us do this before and after SONA,” she said.

Lawyer Tony La Vina of convenor of Manananggol Laban sa Extrajudicial Killings (Manlaban) and Concerned Lawyers for Civil Liberties (CLCL) also said that they will be in full force on the 27th in case there are arrests and other rights abuses committed against the participants.

“If there will be arrests, it is in violation of the Constitution even arrests made during the quarantine,” La Vina said.

Renato Reyes Jr., secretary general of Bagong Alyansang Makabayan (Bayan), said that this year’s theme is connected to COVID-19, to the “veerus” in Malacanang Palace and the pandemic of negligence. He encouraged those who will attend to come in their COVID-19 inspired attire.

He added that the protest will observe safety health protocols like physical distancing, wearing of face mask and bringing disinfectant just like the recent protests at the University of the Philippines.

Reyes added that there is no reason to be terrified even with the effectivity of the Anti-Terror Act tomorrow, July 19. “Now is the time to stand up and express indignation,” he said.