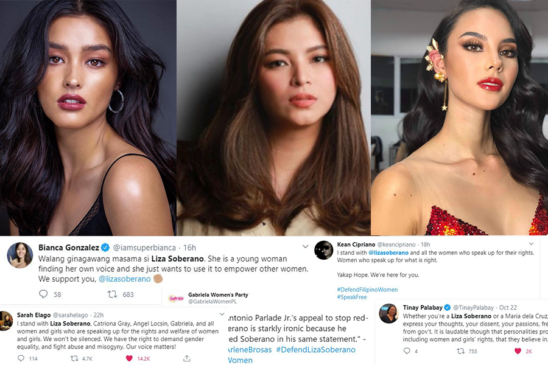 Lieutenant General Antonio Parlade Jr. warned Soberano that she might suffer the fate of Josephine Anne Lapira, a 22-year-old student from UP Manila who was killed in 2017 in an alleged encounter between government troops and New People’s Army (NPA) fighters. Parlade’s veil threat came after Soberano served as a speaker in Gabriela Youth’s recent webinar.

Parlade recently denied linking Soberano to the NPA, saying he was only warning Soberano.

Netizens, however, are not convinced. Many of them applauded Soberano as well as Locsin and Gray who have also been targeted by red tagging by paid trolls.

Liza Soberano and Catriona Gray was red-tagged by a certain AFP official. Let me remind you sir, you don’t tell someone what to do and how to think. Your mandate is to protect the citizens, not threaten.

So let me get this straight—

The powerful men in this country praise Catriona Gray, Angel Locsin, and Liza Soberano for their “beauty and grace”, but the moment they speak their minds and give educated, intelligent opinions, the witch hunt begins?

I have to tell you something.

Advocating about Women’s Rights is not an act of terrorism or a sign of being a member of the NPA. Stop red tagging people like Liza Soberano just because she gave a talk at a Gabriela Youth webinar.

Why is red-tagging a death threat? It maliciously blurs the distinction between civilian activists and rebel combatants to incite and justify state violence and other human rights abuses against activists. Antonio Parlade Jr.’s statement to Liza Soberano makes that very clear.

Parlade has united a huge chunk of people.

Liza Soberano and her supporters. Women’s rights advocates. Lawyers and constitutionalists who are attacked by Parlade’s inutility of the law. Human rights defenders. Journalists. And many many more.

To all those speaking up for the rights and welfare of women and girls (or anyone else!), keep on going!!! THIS IS NEEDED. #DefendFilipinoWomen

In solidarity with empowered women and in support of Filipinos who are trying to be silenced by the powers that be.

Parlade is proof that a man with a most decorated chest and a thousand guns will still cower at the sight of a woman who has found a cause for her voice.

Walang ginagawang masama si Liza Soberano. She is a young woman finding her own voice and she just wants to use it to empower other women. We support you, @lizasoberano ??

Stop mansplaining. Women can speak and decide for themselves. If we refuse to be a Duterte mouthpiece like Parlade, it does not mean we’re “enemies” of gov’t; we just cannot allow ourselves to become tools of repression and fascism. Misogyny has no place in a democratic society.

Whether you’re a Liza Soberano or a Maria dela Cruz, you have a right to express your thoughts, your dissent, your passions, free from intimidation from gov’t. It is laudable though that personalities promote social causes, including women and girls’ rights, that they believe in.

“ABS-CBN and Star Magic stand by Liza Soberano as she speaks out against violations of women’s rights.  This is her own voice and not of any person or group,” ABS-CBN said in a statement.

“It is our hope that people may be allowed to freely participate in meaningful and rational discussion of issues without having been red-tagged,” the media giant added.

ABS-CBN also expressed their concern on what they call as “wrongful identification” of Locsin as a member of the NPA. “Doing humanitarian activities and speaking one’s mind do not make one a member of a communist group.”

“We support Angel as she continues to devote her time, talent and resources to various philanthropic activities,” ABS-CBN said in a statement.

Meanwhile, these women remain unfazed and vowed to exercise their rights to continue their advocacy.