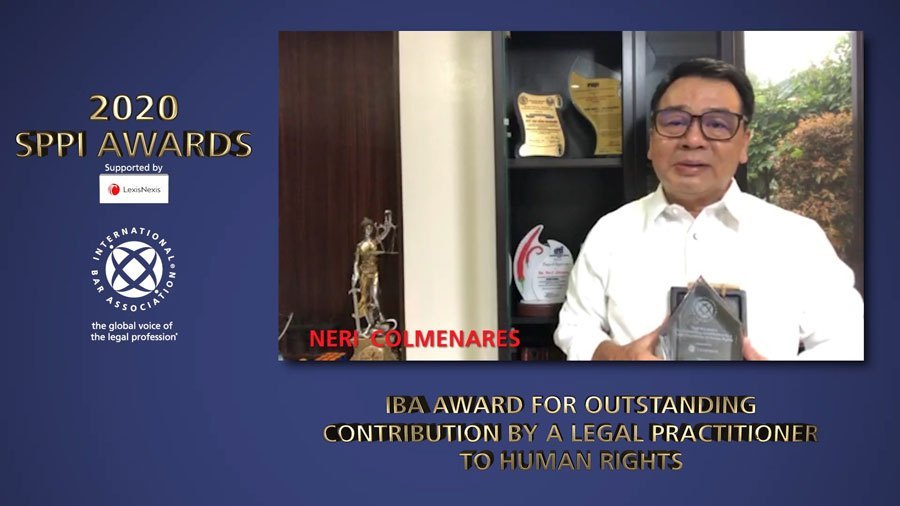 By RAYMUND B. VILLANUEVA
Kodao Productions
Reposted by Bulatlat.com

Neri Colmenares, one of the country’s most prominent public interest lawyers, is this year’s awardee for outstanding contribution to human rights by the foremost organization for international legal practitioners, bar associations and law societies.

The International Bar Association (IBA) bestowed Colmenares the award for his “extensive contribution to human rights, and his continuing determination and advocacy, in the face of great adversity.”

IBA said Colmenares has made an outstanding contribution to the promotion, protection and advancement of the human rights of any group of people, particularly with respect to their right to live in a fair and just society under the rule of law.

The presentation was made on Monday, 9 November, during the online Section on Public and Professional Interest Awards ceremony as part of the IBA 2020 – Virtually Together Conference.

Himself a victim of unrelenting red-baiting by military, police and government officials for his human rights advocacy and activism, Colmenares is a former three-term member of the Philippine House of Representatives and is currently the national chairperson of the National Union of People’s Lawyers (NUPL).

He is also a leader of the Concerned Lawyers for Civil Liberties and adviser for advocacies of the Integrated Bar of the Philippines.

Colmenares’ human rights advocacy began when he became the Western Visayas regional chairperson of the Student Catholic Action of the Philippines during martial law in the 1970s.

While campaigning for the return of student councils in schools ordered closed by then President Ferdinand Marcos, Colmenares was arrested and tortured by the military.

He spent four years in jail as one of martial law’s youngest political prisoners at 18.

Colmenares is an outstanding alumnus awardee of SBU.

As a human rights lawyer, Colmenares has argued a number of cases before the Supreme Court and championed causes in the legislature in support of marginalized sectors, including the following:

* The Party List Election Case in 2000, which led to the High Court ordering that 20 per cent of the seats in Congress be reserved for the marginalized and underrepresented poorer .

* The Pork Barrel Case during the Gloria Macapagal-Arroyo administration that led the Supreme Court to declare the Congressional practice as unconstitutional.

* Colmenares is also acting as co-counsel in a complaint against President Duterte for crimes against humanity, filed to the International Criminal Court (ICC) by families of extrajudicial killing victims.

As a parliamentarian, Colmenares advocated for the democratic rights of those with disabilities and the elderly, such as special election precincts to assist them in voting, as well as introducing the Early Voting Law for media personnel who would be covering the election on the day.

He also authored the law mandating the Philippine government to issue early warning to citizens during disasters and calamities as well as an increase of benefits given to social security system pensioners, among many other pieces of legislation.

In 2005, Colmenares helped organize the Counsels for the Defense against Attacks on Lawyers, a group of lawyers and law students advocating against the unlawful killings and arrests of their colleagues under then President Arroyo.

In bestowing him the award, IBA Human Rights Law Committee co-chairperson Federica D’Alessandra said Colmenares has drawn on every tool in the legal toolbox, from legislation, to litigation, to advocacy in order to advance human rights and the rule of law for the protection of the Filipino people.

“With this award the IBA recognizes [Colmenares’] incredible accomplishments, and celebrates his great resolve as he continues to fight for media freedom, and stand against extrajudicial killings, forced disappearances and unlawful detention in the Philippines,” D’Alessandra said.

“Mr Colmenares is truly an exceptional human rights lawyer, and has contributed hugely to increasing respect for the rule of law and the promotion and protection of human rights. His advocacy is all the more remarkable given the relentless persecution in the Philippines of individuals speaking out against human rights abuses. His continuing determination and courage make him an exceptional awardee,” she added.

The NUPL said it is humbled by the International Bar Association’s choice of Colmenares as the recipient of the prestigious award.

“It could not have come at a better time than now that human rights lawyers and defenders in the Philippines are under attack especially in the form of vicious vilification commonly referred to as red-tagging,” the NUPL said.

“We share the elation of our colleagues, clients and friends and see this latest award on yet another prominent progressive leader not only as a distinct and well-deserved honor but also as a tribute to all others who rage against injustice despite the great odds and risks and as a clear repudiation of the ongoing demonization of human rights defenders and social activists in the country,” the NUPL said.

The group also asked the global legal community to continue monitoring the human rights situation in the Philippines and support their campaign for human rights as well as the call to stop the attacks against lawyers, judges and human rights defenders.

“We hope that message sinks in on those forces who peddle lies, spins and crap against us who continue to push back and stand ground against brazen attacks on rights and freedom,” the NUPL said.

Colmenares said the award is both an honor and an inspiration to human rights lawyers like them to continue their work with the people despite the threats and difficulties.

He said awards from established international institutions like the IBA serves as a mantle of protection to threatened lawyers worldwide.

“Fifty (50) lawyers and judges have been killed in the Philippines since 2016 and this award will also provide a mantle of protection for human rights lawyers like me,” Colmenares said.