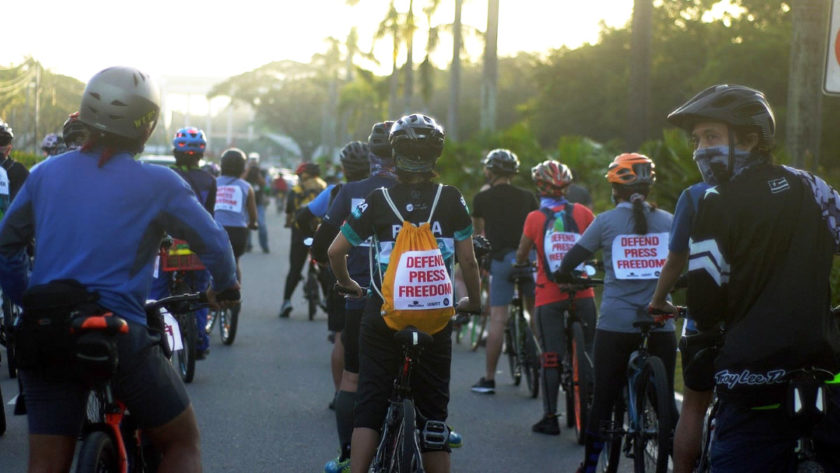 Cumpio, executive director of online media outfit Eastern Vista, was arrested last year along with four human rights defenders. They were charged with illegal possession of firearms and explosives.

The route of the bike ride highlighted the pressing issues hounding the media recently.

The bikers signed the petition for the renewal of ABS-CBN franchise. Just recently, the House of Representative archived House Bill 6732, which seeks to grant the network a provisional franchise.

The bikers then proceeded to Alejandro Roces Circle before going to the Commission on Human Rights for an hour program.

In her speech at the CHR, Rhea Padilla, national coordinator of Altermidya, called for the release of Cumpio and Manila Today Editor Lady Ann Salem, whose charges have been recently dismissed.

Padilla said Cumpio has not wavered in serving the people even inside prison, teaching fellow inmates under the Alternative Learning System. “Frenchie has continued to inspire us and we assure her that we will never get tired of calling for immediate release and for junking of trumped-up charges against her,” Padilla said in Filipino.

Padilla also welcomed the decision of Mandaluyong Regional Trial Court junking the charges of illegal possession of firearms and explosives against Salem.

In a statement, the NUJP called on the court to “correct the injustice and free Frenchie Mae.”

“The ordeal of Frenchie Mae is part of the increasing persecution of the critical media by the forces of a government so intolerant of criticism and dissent that the mere exercise of democratic rights is enough for one to be branded an “enemy of the state,” NUJP said.

“Journalism is not and can never be a crime. This is why the agents of the state resort to falsehoods and fabricated evidence in their efforts to silence the truth-tellers,” the group said.

Meanwhile, Tonyo Cruz of Let’s Organize for Democracy and Integrity (LODI) reiterated that press freedom is not only for journalists but also for the people. “Press freedom stems from the people’s right to free expression and their right to know what is happening in our society,” Cruz said.

Today is also the 20th anniversary of Bulatlat, the longest-running online media outfit in the country.

“We are grateful for the trust given to us by our sources – the marginalized and the oppressed. They are also the reason why we persist in telling the truth,” Olea said.