This is the lament of Santiago Bacasno, father of Mark Lee Bacasno who was among the nine people killed last March 7 in Rodriguez, Rizal.

In a virtual press conference on Friday, March 12, Bacasno said that there is no truth to the claim of the police that his son is a member of the New People’s Army or any armed group. He said that his son was hard working construction worker, who was trying to provide food for his family.

“You have no mercy. All you do is kill, kill, kill” Bacaso said in Filipino.

He and other family members of those who were killed and arrested on March 7 are demanding for justice for their loved ones.

On early morning of March 7, nine people were killed and six others were arrested in a simultaneous police operation in Calabarzon (Cavite, Laguna, Rizal and Quezon) between 3:00 am to 5:00 am. The police claimed that they were killed because they fought back. They also alleged that those who were killed were members of the NPA.

Firearms and explosives were allegedly found in the victims’ houses.

Did not fight back

Relatives insisted that it was impossible for their loved ones to fight back because there were too many police and military officers conducting the operation.

They also denied having firearms and explosives claiming that whatever was found during the operations were “planted” by the operatives.

“My son had been pleading for his life asking them what he did wrong but there was no response from the law enforcers and they killed him,” Bacasno said adding that the police did not present any warrant of arrest when they stormed into their house by force.

Like Bacasno, the surviving family members of other victims belied the accusations against their loved ones.

Michael Dasigao, brother of Melvin, said that his brother was just a driver and a member of the urban poor group San Isidro Kasiglahan, Kapatiran at Damayan para sa Kabuhayan, Katarungan at Kapayapaan (SIKKAD-K3).

As SIKKAD-K3 member, Michael said that Melvin helped in the work of the organization, particularly in the distribution of relief goods in the area during the pandemic.

He said that his brother cannot possibly fight back because there were too many police and military officers.

“They forcibly opened the door and when his partner opened the door, she and her children were ordered to get out of the house while Melvin was forced to lie on his stomach. When she turned her back she heard three gun shots. After that they immediately took the body of my brother from the place without any investigation,” he said, insisting that proper investigation should be done.

Dasigao was brought by the raiding team to Antipolo Funeral Homes who refused to release the bodies until after four days when pressure for the release of the bodies escalated.

“They did everything they can to delay the release of the bodies. They even harassed us. But they did not win, because of those who support Melvin,” he said. 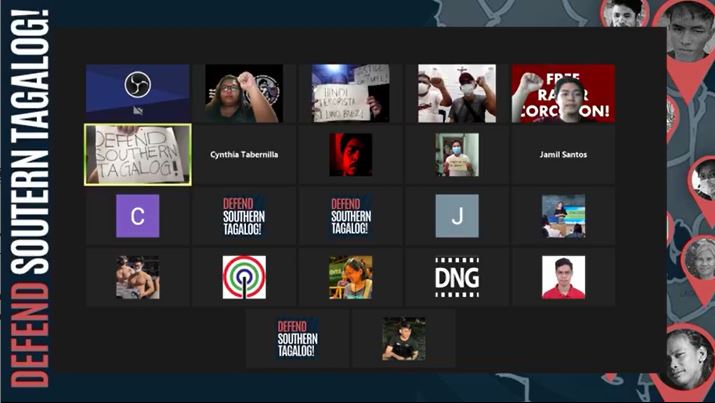 As for couple Ana Mariz (aka Chai) and Ariel Evangelista of Nasugbu, Batangas, Kyle Delgado of Karapatan-ST said that the couple were sleeping when they heard a loud banging on the wall.

Delgado said that the house where the couple was staying is not the address specified in the arrest warrant.

The nine-year-old son of the couple, who witnessed the incident, said that his parents were forced to lie on the floor in their bellies and then dragged to the house to the house where the search warrant was addressed.

“They were killed in that house. We believe that they did this in order to legitimize their operation since the search warrant was addressed there,” said Delgado adding that the police preposterously claimed that the couple was hiding a hand grenade in their house.

Neighbors would not even believe the claim of the police, said Delgado, because Chai was simply a peasant organizer while managing cottages. He said that even the neighbors are not believing the narrative of the police because Chai was a known peasant organizer as well as her family. She was also managing cottages rented out to beach goers. Ariel, on the other hand was a fisherman and helped in their local organization of fisherfolk.

Casey Cruz, spokesperson of Bagong Alyansang Makabayan (Bayan)-Timog Katagalugan, said that Emmanuel “Ka Manny” Asuncion already reported instances of harassment and surveillance not only in his home but also in communities where he went. They assert that the claim of the authorities that they have been searching for Asuncion for five years is preposterous as he was prominent in protests both in Metro Manila and in Laguna.

Asuncion was the Secretary General of BAYAN-Cavite .

“Kuya Manny was just here. He is innocent and he doesn’t need to hide,” Cruz said.

Liezel, wife of Asuncion cannot hold back tears while she calls for justice for her slain husband and all the others.

Meanwhile, in different protest actions across the region, families of those arrested decried the planting of evidence by police officers.

Carl Corcolon, son of Ramir Endriga Corcolon, arrested early morning of March 4, said they heard loud noises outside their house, and was alarmed when they saw that their house was surrounded by a large number of police operatives. He was about to open the door, when the police forcibly opened it. They were then ordered to lie on their stomach and to keep quiet. They stayed that way for almost an hour, until they were finally ordered to leave the house. It took time before their house were finally searched on the arrival of barangay officials. The search allegedly resulted in the extraction of weapons and a grenade.

“This is very impossible. My father is a government employee of the water district for almost 30 years. He has no criminal and administrative record be it here in San Pablo or anywhere in the country,” Corcolon said.

Ramir is an officer of the Confederation for the Unity, Recognition and Advancement of Government Employees (COURAGE).

Anna Baez, wife of Lino Baez, Bayan-Batangas coordinator also decried of planting of evidence when police raided their house also on March 7 at 5:00 am. Lino was not in the house during the supposed serving of search warrant but their house was still raided by the police.

Like other cases, the police ordered Baez and her children to get out of the house. She said it took about an hour before they were joined by a barangay official and for the search to start. Baez was allowed to join the search team.

“I was surprised and was angry. I cursed them all. The barangay official tried to calm me down and told me not to be hysterical,” she said.

She told the police that she would never put a grenade or ammunition inside their house “because that would be suicide.” She denies that her husband kept firearms and explosives in their house.

Cruz said that rights violations in Southern Tagalog is not new as they have been subjected to attacks even during the previous administrations. The attacks did not stop and it even worsened as resistance against development aggression projects and demolition in bay areas for ecotourism continued in the region.

But despite the worsening harassment, Cruz said that the people will not waver and will continue to fight and voice out their grievances.