COVID-19 cases to double in 2 months – UP experts

MANILA — Experts from the University of the Philippines’ COVID-19 Pandemic Response Team warned that the current new daily cases being reported may double in two months.

“The numbers don’t lie: we are in a worse state than when we were less prepared a year ago in addressing the pandemic in the country,” said biologist and bioethics expert Chuckie Calzado.

Today, March 25, the Philippines recorded another all-time high of 8,773 daily COVID-19 cases. For the past days, new daily cases in the Philippines have not gone below 5,000. This amid renewed government attempts to restrict mobility through granular lockdowns and the so-called “NCR Plus” bubble. 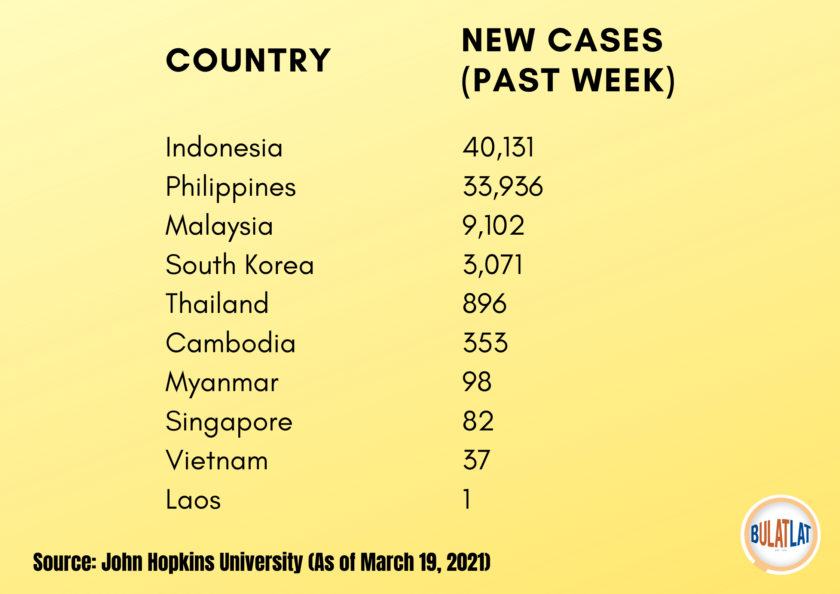 In a press briefing led by AGHAM, scientists from the UP COVID-19 Pandemic Response team presented pandemic forecasts through statistical models to illustrate the severity of the current situation.

Jomar Rabajante of UP COVID-19 Pandemic Response Team said that while the numbers are alarming, the increase of cases could be avoided if only the government implemented mass testing and contact tracing, rolled out the vaccines earlier, and slowed down on opening the economy.

“One way to lower the cases is to suppress transmission and to lower the positivity rate–we must expand testing,” said Rabajante, adding that the doubling of cases may happen within two or three months.

Rabajante said we must continue to monitor every day, as their study is based on the assumption that the growth rate will remain constant. 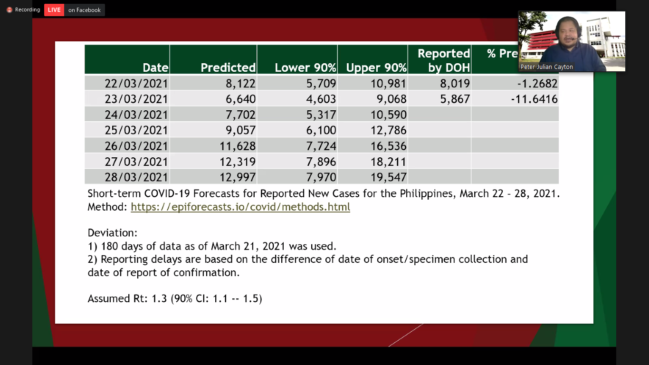 Data revealed that 52 percent of the active cases are in the National Capital Region alone.

UP Diliman School of Statistics Associate Professor and member of the UP COVID-19 Pandemic Response Team Peter Cayton shared that on March 28, 2021, cases may go between 7,000 to as high as almost 20,000.

Cayton reiterated the need to increase the country’s testing capacity.

“To match the standards of World Health Organization’s positivity rate on a daily basis, we should be testing at least 130,000 individuals per day, at least 90,000 in NCR, at the current rate that we are going,” Cayton said.

Government data revealed that testing remains at 30,000 to 40,000 per day, with several provinces still without access to an accredited test center.

He also discussed the six crucial policies absent in the latest IATF resolution.