The Filipino elderly are left behind

After the launching of a community pantry resulted in crowd chaos and the death of a 67-year-old man, government officials and the media were quick to point fingers: at the well-meaning celebrity philanthropist, who remorsefully owned up to her failure to coordinate with barangay officials; at other community pantry organizers, who are accused of being scheming communists; and at the mass of hungry Filipinos who would brave the scorching heat and risk catching the virus just to get through the day.

And yet, why an older person had to be falling in line for free food in the first place was almost beside the point, a sight so commonplace under this new normal. For a nation that supposedly keeps strong traditions of filial piety, it should be a source of shame that many of its elderly are living in poverty and now disproportionately at risk of dying from the coronavirus.

Many of our elderly have no golden years to speak of.

According to official figures, more than 800 thousand or 9.1 % of Filipinos aged 60 and over in 2018 lived below the unbelievably low poverty threshold of Php71 a day. Meanwhile, the 2018 Longitudinal Study of Ageing and Health in the Philippines (LSAHP) found that more than half (57.3%) of Filipino elderly reported experiencing some or considerable difficulty in meeting expenses.[1] This is in sharp contrast to Vietnam, where a parallel study in 2018 found that only 14.7% of Vietnamese older persons reported such difficulty.[2] This is despite the fact that the Philippines has a higher gross domestic product (GDP) per capita than Vietnam.

The idea is simple: “those disabled from work by age and invalidity (sic) have a well-grounded claim to care from the state,” declared German Chancellor Otto von Bismarck in 1889, who laid the origins of the modern pension system. In other words, older persons have a right to be supported, more so for being once economically productive members of society.

Yet, the Philippines’ contributory pension programs, namely the Social Security System (SSS) for private workers and the Government Service Insurance System (GSIS) for state employees, covered only 20% of senior citizens in 2018 (see Figure 1). In the same year, the amount of monthly retirement pension from SSS amounted to only Php4,984 – not even enough to save retirees from slipping into subsistence or food poverty. (The Makabayan bloc in Congress has always been pushing for a Php2,000-pension hike, but the bill was earlier vetoed by the previous administration and remains pending in the current Congress.)

Due to the very limited pension coverage and benefits, the greater majority of older persons have to rely on less reliable sources of income. These include the money sent by their children within the country (58.3%) and abroad (14.8%), earnings from work (34.2%), and income from farm (23.2%). In fact, only 20% of Filipinos deem pension their primary income source.[5]

As it is, our pension system only covers the minority who have been engaged in formal work, who are relatively well-off to begin with, and it largely excludes workers in the informal sector.

Lobbying by various groups has introduced some positive changes to the country’s old-age support system, but these are fraught with limitations. The senior citizen ID, for instance, only provides a 5% discount for a maximum of Php1,300 in groceries (or a measly Php65 at most for every transaction), and it is not very useful to those who do not have money to buy food or medicine in the first place. Moreover, while the Department of Social Welfare and Development (DSWD) Php500 monthly social pension targets the poorest senior citizens, Php500 is obviously not enough to survive a week, much less a lockdown for an entire month.

While these measures are welcome, they are merely palliative. Chronic underfunding remains the major issue faced by our ailing pension system, which was ranked the fourth worst in the world in 2019. In 2016, it was revealed that on top of SSS executives’ fat bonuses, the government-owned corporation failed to collect Php325 billion in revenues and Php198 million profit in its idle assets – all while workers are burdened with contribution hikes.

Older persons are the fastest-growing age sector in the country. In the next five years or so, they would make up at least 10% of our population, making the Philippines an ageing society.[6]

Thus, old-age support will be a greater policy concern in the next few years. A social pension program like the one introduced by DSWD could address the many limitations of a contributory pension scheme and the income gap among the elderly. In the immediate, however, there is an urgent need to expand and boost the social pension program to cover all senior citizens, and not just those narrowly classified as poor. Moreover, the amount of social pension, which is one of the lowest in the world (see Figure 2), should be raised to a reasonable threshold and adjusted to reflect rising prices of commodities.

In the longer term, steps must be taken to realize a universal social pension system – a tax-funded minimum guarantee for old age. This has been tested in numerous countries in the world, and it has been shown to perform better than a means-tested system that the DSWD currently employs. It will eliminate exclusion errors, save administrative costs, cut bureaucratic red tape, and complement, not compete with, efforts to expand direct contributory pension schemes.[7] [8]

Beyond notions of utang-na-loob and altruism, a universal social pension system would have positive impacts on the economy. It would widen access to and raise spending for healthcare. It would also decrease household poverty, as it could reduce the amount of support given by adult children to their parents, on the one hand, and raise spending in the elderly’s households, on the other hand. In fact, it is estimated that a universal pension would lift over three million Filipinos out of poverty.[9]

It is time we stop treating old-age welfare as an afterthought, a “residual” policy, just because the elderly are “unproductive,” as President Rodrigo Duterte puts it in one of his late-night ramblings. This is but a lie. Our senior citizens are still productive in more ways than one: they take care of their children and grandchildren; many of them still work to provide for their family, and their communities turn to them for their wisdom and leadership.

But welfare, it must be stressed, is not dependent on one’s productivity. It is foremost a state obligation. If we are to be judged as a nation, let it be by how we look after the most vulnerable of us, including our elderly. 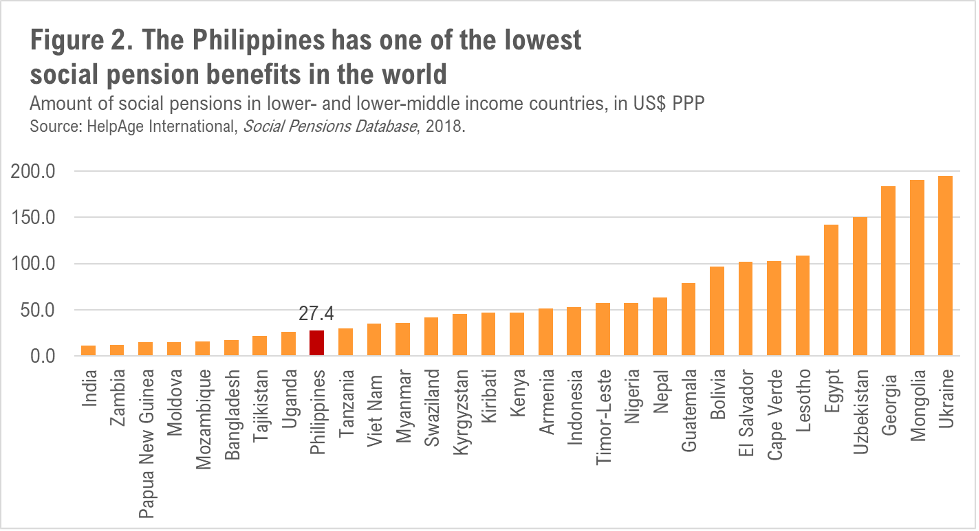 [3] University of the Philippines Population Institute (UPPI) and Demographic Research and Development Foundation, Inc. (DRDF), COVID-19 and the Older Filipino Population: How Many Are at Risk? accessed April 30, 2017, https://www.uppi.upd.edu.ph/research/covid-19/rb1.

[5] “Economic Well-being,” in Ageing and Health in the Philippines, loc cit.

[7] The Feasibility of a Universal Pension in the Philippines (Quezon City: Coalition of Services of the Elderly, 2017).

[9] The Feasibility of a Universal Pension in the Philippines, op.cit.