Asian hate is nothing new, Covid-19 made it worse

Filipinos ranked the third largest ethnic group who reported to have experienced discrimination and harassment, according to a report from Stop AAPI Hate.

Jan used to walk near the ledge of the subway station in New York City. But when a person who takes the same route as hers was pushed to the train tracks, she now walks on the middle. She’s afraid that the same thing might happen to her.

“That way, if someone tries to push me, I won’t fall right away to the ledge,” said Jan, who was born in Cebu and has been living in New York City since she was 15 years old.

She’s now working in accounting for a foster care agency, and she has been very careful every time she takes the train to and from work since last year.
Jan’s older sister reminded her not to walk near the ledge like she usually does. Her family often talks about the recent racist attacks and they are worried that one of them might fall victim to it.

Although Jan is frequently mistaken as Mexican, she knows the dangers of going outside since the pandemic started and hate crimes against Asians in the United States surged last year.

Asian-Americans, particularly of East Asian and Southeast Asian roots, have been the target of racist attacks which started at the time when the Covid-19 pandemic took hold of the world last year. They were blamed for bringing the virus to the United States.

Racist attacks directed at Asian-Americans also shot up after the statements of then President Donald Trump blaming the Chinese people for the deadly virus and the economic decline brought by the pandemic.

According to a report from Stop AAPI Hate, a coalition launched on March 19, 2020 to track and respond to incidents of hate, violence, harassment, discrimination, shunning and child bullying against Asians and Pacific Islanders in the United States, Filipinos ranked the third largest ethnic group who reported to have experienced discrimination and harassment. While the most prevalent form of discrimination is verbal harassment and physical assault. 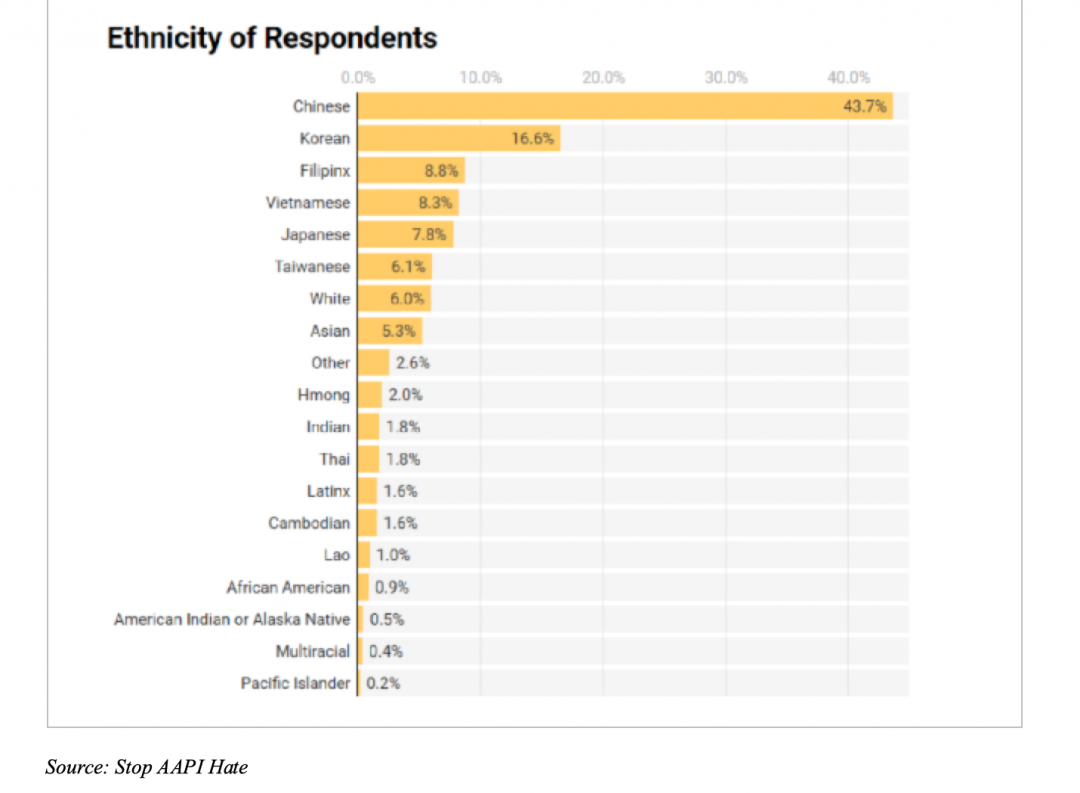 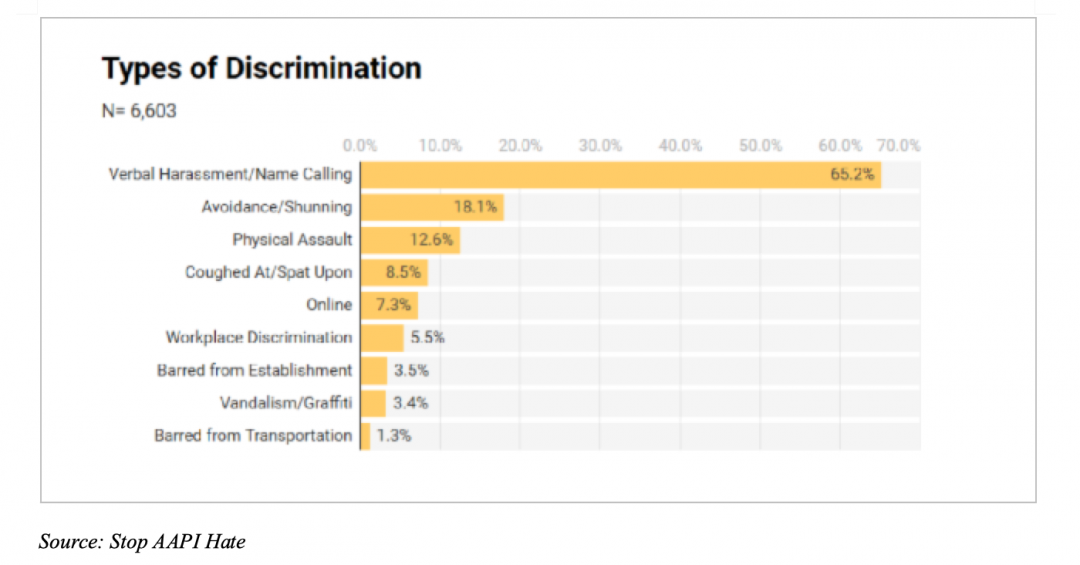 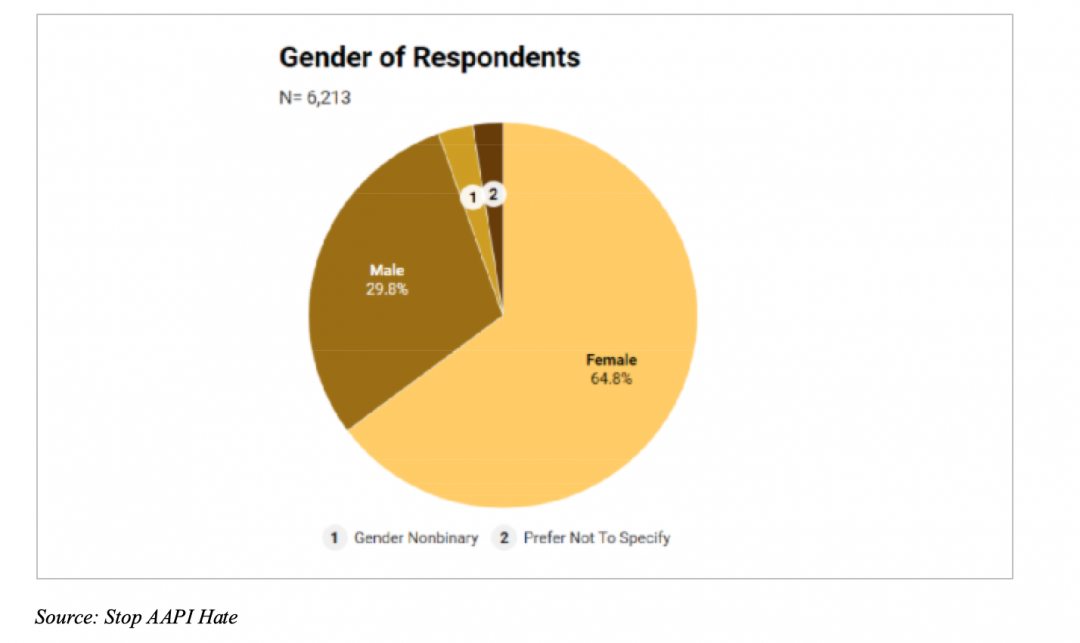 Stop AAPI Hate also documented that most of the reported hate incidents came from women, youth and the elderly. Women are also likely to report incidents 2.3 times than men. The coalition’s data covered March 19, 2020 to February 28, 2021.

“This type of violence is nothing new. It has been going on for years, for centuries against Asians. But we can say that the pandemic put the issue to the spotlight,” California-based Filipino-American historian Kirby Araullo said.

“Usually they target the elderly in grocery stores or banks. A lot of them are women, too. It has something to do with exotifying Asian women,” said Araullo.

Araullo also said that many Filipino-Americans in the United States are still in denial that they are susceptible targets of racism and racist attacks.
He mentioned that the man holding a walis tambo or a reed broom in the Capitol riot early this year was a testament that there are Filipinos who support Trump despite the racist vitriol and policies during his presidency.

“A lot of Filipinos here [in the United States] think that ‘You know, we’re Americans, we’re not one of those Asians.’ They distance themselves because of the stereotypes against Asians,” said Araullo.

At one point in history in the state of Louisiana, Filipinos were somehow considered Caucasian. Throughout history, the racial classification of Filipinos change/evolve depending on the needs of Uncle Sam,” Araullo said.

The Stop AAPI Hate report also identified the top states where incidents happen. These are California, New York, Washington and Texas. California has the highest population of Asians and Asian-Americans, as well as Filipinos and Filipino-Americans, in the United States. 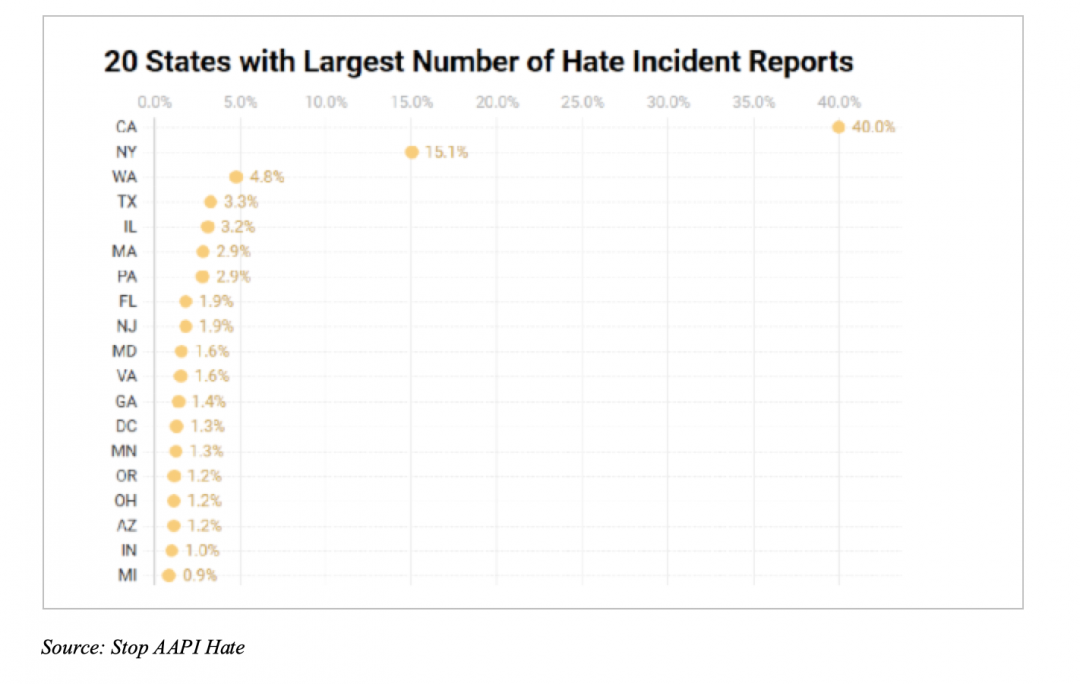 “The kind of discrimination that Filipinos, being Asians, have received over the past century or so here in the US was rooted in racist colonial violence [and] racist colonial projects of the US,” Dallas-based Migrante USA Secretary General Nap Pempeña said.

Filipinos have been in the continental United States longer than we have thought, even before the United States became an independent country.

Araullo said that the Spanish galleon Nuestra Señora de Buena Esperanza brought Filipinos from Luzon to Morro Bay, California to explore the area in 1587, two decades before the English founded its first colony in Jamestown, Virginia and three decades before the Pilgrims arrived at Plymouth Rock in Massachusetts.
The expedition resulted in the death of one Spaniard and one Filipino, while several crew members of the galleon were injured, upon contact with the Native Americans.

Filipinos would again land in California in 1595 aboard the Manila galleon San Agustin.

The presence of Filipinos in California was on and off, Araullo said. But in the 1760s, Filipino slaves, who were labeled chinos, in Spanish galleons escaped to Mexico and as far as Louisiana.

In 1763, Saint Malo, near Barataria Bay in Louisiana became the first permanent Filipino settlement in North America. It is now considered as the oldest Filipino community in the United States.

Filipinos, such as Larry Itliong and the Delano manongs, also made a mark in the labor movement in America when the workers in grape farms in Delano, California staged protests and boycotts demanding for higher wages and better working conditions from 1965 to 1970 alongside Mexican-American farmworkers. The strike also gained an overwhelming support from the public.

Before the strike, the Delano manongs received low wages and lived in labor camps with poor conditions. Delano farmworkers were paid $1.10 per hour while other farmworkers elsewhere were paid $1.40.

These conditions and unfair treatment sparked the Great Delano Grape Strike of 1965. And finally in 1970, the grape growers entered into a collective bargaining agreement with the farmworkers’ union.

From farms to health care

The waves of Filipino immigrants to the United States were primarily driven by economic opportunities.

First as farmworkers in California and now as health care professionals, particularly as nurses.

Today, four percent of nurses in the United States and more than half a million of immigrant nurses are Filipino.

“I would be asked pretty constantly by those who were training me and even some of the patients, ‘Where did you get your nursing education?’ And if I do something that might be different from their standard, they’re always like, ‘Is that what they teach you in the Philippines?’” said Jhonry dela Cruz, a Filipino-American nurse based in Maryland.

Dela Cruz graduated nursing from the University of the Philippines Manila in 2014. He described his nursing education as “one of the most rigorous nursing programs in the Philippines.”

And although he was born in America, and therefore an American citizen, that did not make it easier for him in his search for a job after studying in the Philippines.

“[It’s a] bottleneck pattern. [There’s] a lot of need but there are a lot of qualifications [and requirements], especially for foreign graduates,” said dela Cruz, now working as a nurse in a skilled nursing facility.

Aside from the process of securing requirements and finding a job, dela Cruz now has to deal with patients who repeatedly question his skills and competence as a nurse.

Dela Cruz said that there was a patient who requested for a different nurse other than him because they had difficulty understanding his accent.

“English is one of my first languages. And even if I have somewhat of an accent, how was that supposed to impact anything?” he said.

“I remember feeling very frustrated. I’m still an outsider. I need to work hard to get to where I’m now. But I’m still considered an outsider, not on the same footing just because I speak in a different way,” Dela Cruz said.

Filipino nurses are also in a precarious and hazardous situation as frontline workers during the Covid-19 pandemic.

“Only four percent of US nurses are Filipino and yet 30 percent of those dying in the frontlines in this pandemic are Filipino. It’s very disproportionate and that’s because Filipino nurses have been relegated to the most dangerous [and] riskiest lines of work within the nursing industry,” Pempeña said.

Pempeña also said that “discrimination and violence against [Asian immigrants and] migrant workers are nothing new.”

“From the Chinese Exclusion Act [of 1882] to the discrimination that Filipino manongs faced [in the 1960s] when they were working in the fields as agricultural workers. It stems back to that,” Pempeña said.

Job losses and low wages in America due to the pandemic are also seen as factors contributing to the spike in violence against Asians.

Anti-Asian hate crimes also became a tool for the American media to put the blame on African-Americans.

“In general, the American society loves pitting people of color against each other. Like in the news, the perpetrators of Asian hate crimes were African-Americans. But if you look at the data, the vast majority of perpetrators were white Americans,” Araullo said.

University of Michigan’s Virulent Hate Project reported that in 2020, eighty-nine percent of offenders were white, while only five percent were Black.

“If a Black person commits a hate crime, they are quick to show it in the news, but they won’t show it if a white person does it,” said Araullo.

Araullo said that racism is “the DNA of the United States which is a very white country from the very beginning.”

“Even if a white American claims not be racist, they still have prejudices that they can’t get rid of. Being racist is inherent in American society because that’s how the system was set up and still operates in the same way [and] in many ways today,” he said.

Bagong Alyansang Makabayan USA (BAYAN USA), a progressive alliance of Filipino organizations in America, said in a statement that “colonization solidified the racist and misogynist character of these attacks to reinforce imperialist exploitation of land and people.”

“The hate crimes and murders we have seen throughout US history up until the present day are mirrors of the imperialist violence that continues to be committed abroad,” it added.

“In particular, attacks against Asian women are rooted in the ongoing history of poor and working class women being forced to provide ‘rest and relaxation’ for white foreigners, especially those in the military, in order to survive,” said BAYAN USA in its statement.

The anti-Asian attacks also affected the mental health of many Filipinos in the United States.

Jan said that she’s anxious whenever she’s out or in the train station because someone was pushed on the very same route she takes to work.

For Pempeña of Migrante USA, it’s “tricky” to involve the authorities “given the issue of police brutality.”

Pempeña said that there are some who call for more policing, while some do not want it.

“How do you combat anti-Asian violence without causing harm to more communities, especially the Black community?” Pempeña asked.

“We don’t see that more policing would necessarily lead to better protection for the Asian community,” Pempeña said, adding, “We see that among the roots of this anti-Asian violence are pronouncements by Trump that really drummed up, especially xenophobia and blaming the virus and economic downturn to the Chinese people.”

She said that elected officials “have a role to play in drumming up this anti-Asian violence and they should be held accountable for that.”

“Besides holding perpetrators of anti-Asian violence accountable, especially in the [recent] murder of Asian women in Atlanta, [Georgia], it’s also important that we fight anti-Asian violence in all fronts and rectify and correct a lot of the discriminatory practices in labor that exploit our kababayans in the care industry, even in the nursing industry, those also need to change,” said Pempeña.