You Are Here: Home → 2021 → July → 16 → Dismissed cases: A look at the invalid search warrants vs red-tagged activists

Dismissed cases: A look at the invalid search warrants vs red-tagged activists 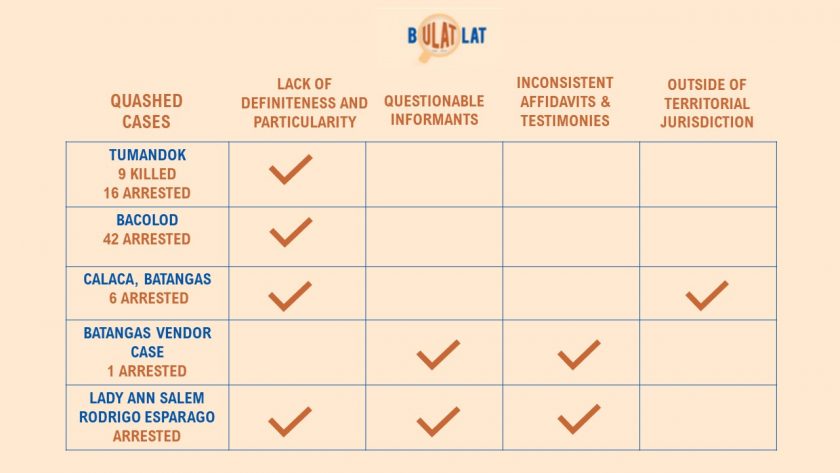 Bulatlat looks into the five of these cases, where charges of illegal possession of firearms and explosives sprung from the enforcement of search warrants issued by so-called warrant factories.

Among the most recent was a Capiz court deciding that a search warrant used in the ‘Bloody December’ raid – issued by a co-equal trial court hundreds of kilometers away – was invalid.

The Mambusao Regional Trial Court Branch 21 granted the six petitions to quash the search warrants, citing the failure to “satisfy the constitutional requirement of definiteness or particularity.” Consequently, all evidence purportedly found in the possession of the arrested indigenous peoples were suppressed and found inadmissible.

This now invalid search warrant was penned by Jose Lorenzo Dela Rosa, executive judge of the Manila Trial Court. These warrant factories have been assailed by rights groups for issuing questionable warrants against activists who are red tagged by the Duterte administration. In most of these operations, the serving of the search warrant led to killings, with state forces claiming that victims fought back.

“We are of course elated that our assertion about the dubiousness of the search warrant and by implication even the violent search itself was validated by a brave and independent court that remained faithful to the law, the Constitution and reason,” said National Union of Peoples’ Lawyers President Edre Olalia.

“That it had to take some time and at irreparable costs to the life, liberty and security of our oppressed & poor indigenous peoples is lamentable,” Olalia added.

Recently, the power of the so-called ‘search warrant factories’ to issue warrants outside of their jurisdiction was revoked. Executive judges in Quezon City and Manila who issued numerous search warrants used in crackdowns against activists and progressives in different regions are now only allowed to issue warrants within their judicial regions or in the National Capital Region.

Quezon City Executive Judge Cecilyn Burgos Villavert issued the warrants responsible for the Bacolod and Manila arrests in 2019, and the ‘Human Rights Day 7’ arrests in December 2020.

“Once again, this latest in a slow yet seemingly steady stream of trial courts’ decisions junking assailable search warrants is clear proof that roving or imported warrants solicited by the police was an idea gone wrong and abused,” said Olalia.

The Philippine Constitution, as stated in Article III, Section 2, provides: “The right of the people to be secure in their persons, houses, papers and effects against unreasonable searches and seizures of whatever nature and for any purpose shall be inviolable.

It states further that “no search warrant or warrant of arrest shall be issued except upon probable cause to be determined personally by the Judge after examination under oath or affirmation of the complainant and the witnesses he may produce, and particularly describing the place to be searched and the persons or things to be seized.”

It follows that any evidence obtained in violation of this shall be inadmissible for any purpose in any proceeding.

Aside from the case of Tumandok leaders and members, the Bacolod raid which arrested 42 activists as well as the arrest of journalist Lady Ann Salem and Unionist Rodrigo Esparago were quashed due to lack of definiteness and particularity.

The rights group referred to these as ‘fishing expeditions’ issued by the Manila and Quezon City Trial Courts.

More peculiarly, a case of a red-tagged vendor Lamberto Asinas charged with illegal possession of firearms and explosives was quashed recently due to findings that the informant who introduced himself as a neighbor of the vendor has no record of living in the area. The informant accused the sari-sari store owner of being a high-ranking communist official.

The Nasugbu court also cited major inconsistencies in the testimonies of the policemen who applied for the search.

As stated in the 1987 Constitution, probable cause is to be determined personally by the judge after an examination.

Earlier, progressive groups assailed how ‘warrant factories’ are approving numerous warrants per day. They questioned how these judges were able to look into each case and determine whether there is probable cause, noting that police operations often lead to human rights violations and even deaths.

The recent granting of numerous motions to quash cases that were enabled by questionable warrants proves that errors have been made.

“That our SC finally saw this with the latest rules decisively clipping such powers prospectively gives some aid and comfort to the victims and would-be victims of rights violations,” said Olalia.

“But the outstanding questions remain: how do courts avoid such awkward and embarrassing situations where co-equal courts have divergent, even conflicting findings? How can those responsible for this injustice and their enablers and apologists be made to account and when?”

“And most importantly, how do you bring back the lives lost, restore freedoms taken away and fully repair all the damages wreaked on the victims?” he added. (JJE, RVO)