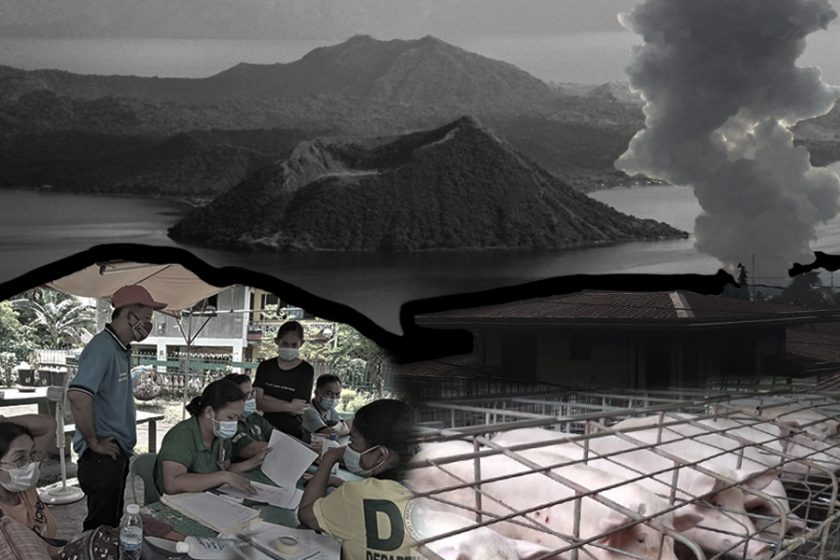 INDANG, Cavite – Local businessman and former village officer Cristituto Lamano spent years building a small fortune from his fish farm, where at least 200 small fisherfolk are employed. But all these were reduced to rocks and ashes when the Taal Volcano erupted last year.

“We just plucked up the courage to go through this. We know that when dust settles, we will be able to recover from this,” Lamano, 42, said in an online interview.

President Rodrigo Duterte, in a speech before evacuees in Sto. Tomas, Batangas back in January 2020, said at least $598 million would be allocated to rehabilitate the affected communities in the province.

In the past months, Lamano said has begun rebuilding his $890,000 business. This after only receiving a measly $495 aid from the government. His efforts, however, are once again under threat with increased volcanic activities in the past weeks.

The Philippine Institute of Volcanology and Seismology has documented several eruptions for the past weeks, with an average of 22,628 tons per day of sulfur dioxide, the highest ever recorded. At least 14,000 residents, particularly those from the Batangas towns of Agoncillo and Laurel, have been forcibly evacuated from the seven-kilometer radius danger zone.

Instead of responding adequately, President Duterte made light of the issue, saying he will put a cap on the hole of the volcano.

“He is only making matters worse with his thoughtless blabber. We are appalled at how Duterte can make fun of the situation and say that he would just put a cap on Taal’s crater. His insensitivity and callousness are over the top and unbecoming of a national leader,” Kilusang Magbubukid ng Pilipinas said in a statement.

In last year’s Taal eruption, government data revealed that at least 22,000 houses were destroyed and about $60.9 million worth of agricultural products, the major source of income in the province, were destroyed.

Despite this, National Economic and Development Authority – Calabarzon Assistant Director Gina Gacusan said only one percent of the US$837.1 million worth of rehabilitation projects has been completed as of March 2021 due to lack of funding.

But a hog raiser like Cecilia Malabanan who lost her livelihood to the 2020 Taal eruption did not receive a single cent of aid.

Malabanan, a resident of Talaga village in Tanauan, Batangas, evacuated to Laguna when the volcano erupted last year. Her husband chose to be left behind as they could not leave their small hog farm. Still, they lost about a hundred thousand pesos.

“I am very anxious because we have just started our business again, slowly recovering. If the volcano erupts, we would end up dead,” Malabanan told Bulatlat in an online interview.

“People will need food and economic aid while in evacuation centers. It would be judicious to tap the remaining Bayanihan 2 pandemic fund for calamity mitigation efforts,” KMP Chairperson Danilo Ramos said.

The farmer leader also called the government’s attention to the risk of COVID-19 surge in evacuation areas. As of this writing, there have been reports of evacuees testing positive to COVID-19. This, Ramos said, made the disaster “an even more dangerous situation.”

Jessica Marasigan, an evacuee from Gulod village of Batangas town Laurel, said precautions and health protocols have been put in place, including a vaccination program for select evacuees.

Despite this, she said there is still fear of contracting the deadly virus.

Assess and repair the damage

Fisherfolk group Pamalakaya has urged the Bureau of Fisheries and Aquatic Resources to quickly assess the damage on fisheries and aquaculture. They added that the government must be prepared to provide calamity assistance for affected fisherfolk amid the latest phreatomagmatic eruption of Taal Volcano.

“We are calling on the BFAR to immediately evaluate the damage of the Taal Volcano eruption to fisheries and aquaculture, leading to reparation for the loss of potential income of fisherfolks and coastal residents situated along the stretch of Taal Lake,” fisherfolk leader Fernando Hicap said.

Pamalakaya said that Taal Lake produces more than a quarter of the country’s tilapia supply.

Hicap said that apart from basic necessities, the evacuees should be given proper medical attention as they could be left exposed to the COVID-19 virus in congested evacuation centers. “There should be enough health personnel in evacuation sites to attend to children and senior citizens who are most vulnerable to the virus,” he said. (JJE, RVO)