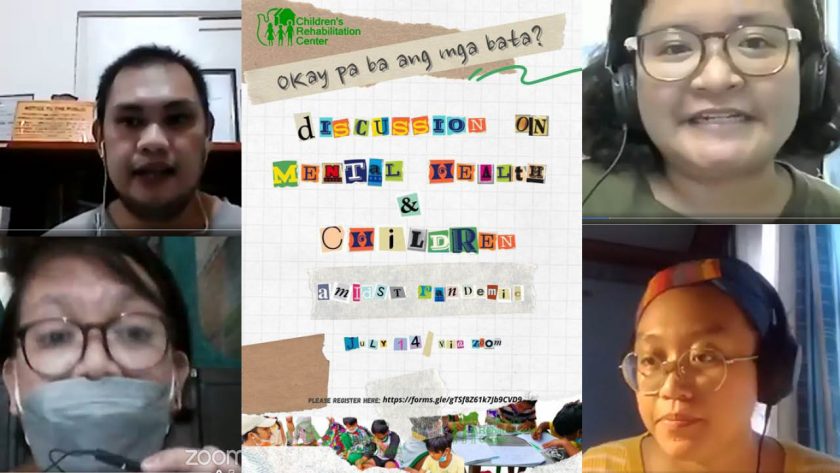 Rights advocates and child psychology experts pointed this out, underscoring the importance of ensuring and promoting children’s mental health amid the pandemic in the recent webinar organized by the Children’s Rehabilitation Center (CRC).

On July 14, Erika Mitra, project officer of the Association for the Rights of Children in Southeast Asia (Arcsea) said children are experiencing drastic changes to their routine with the onset of the lockdowns.

Hunger, longing for the return of face-to-face classes, and their vulnerabilities to being victims of domestic violence affect their mental wellness, the group said.

“If the parents are experiencing depression and anxiety due to lack of jobs and money, how much more the children?” Mitra said.

Mitra said poor children lamented that they have become more hungry now under the pandemic, with some eating only about three times a week since the lockdown was imposed.

Food insecurity peaked between April and May 2020 when the enhanced community quarantine was first imposed, according to the Rapid Nutrition Assessment Survey of the Department of Science and Technology.

Mitra said children also found the government’s blended learning program difficult, with some opting to not enroll at all.

As reported by the government’s Philippine News Agency, the Department of Education said that only 23 million students were enrolled both in public and private schools as of August 2020, a far cry from the 27.7 enrollees in 2019.

“Yes, there are modules, but who will teach them of what’s in the modules especially if the parents and/or guardians have no educational attainment?” she said.

Read: Children most vulnerable to physical, sexual, emotional abuse in the time of pandemic – groups

Also under the pandemic, children are also more vulnerable to physical, emotional, mental, and sexual abuse in their own homes. The country’s Inter-Agency Council Against Trafficking documented 1.2 million reports of online sexual exploitation of children in 2020, which is a far cry from 400,000 reports in 2019.

How to help children

To help children get through the pandemic, Naro Alonzo, a registered psychometrician and psychosocial support provider, said parents and guardians must create a structure, schedule, or routine for their children that can help them physically and most of all, mentally.

She encouraged them to start their day by asking children how their sleep was, or if they are feeling okay. Children should also have at least 30 minutes of exercise to draw out their extra energy.

They can also help in carrying out household chores, which is also a way to bond with other members of the family.

“This will give them a chance to say what they want to say,” she said.

Play and free time, coupled with the limited use of social media, can also help children in coping with the impacts of the pandemic, Alonzo said.

“Discipline is not punishment or policing. We empower the children by talking to them to think about their actions,” she said.

Mitra called on the government to listen to the plight of the Filipino children. (AMU, JJE, RVO)