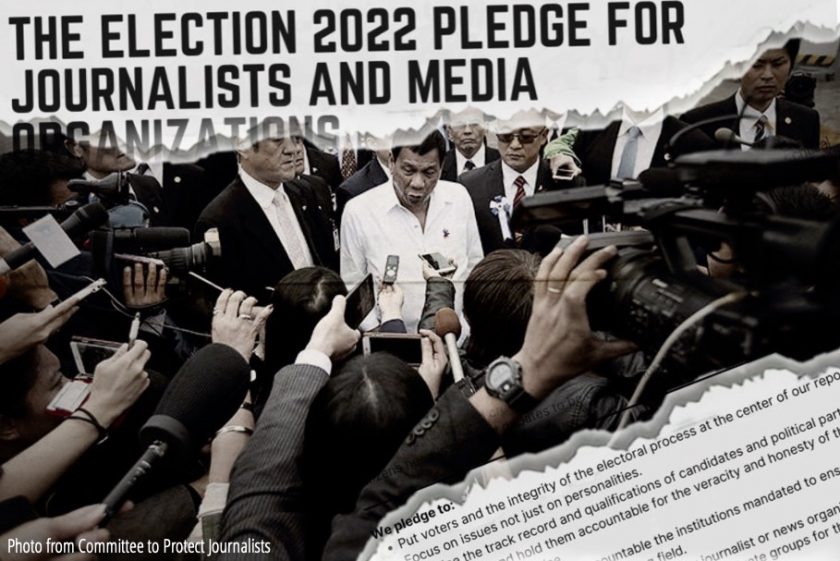 MANILA— Filipino journalists and news organizations launched an election pledge to reiterate their commitment to providing accurate, reliable, and essential information to the Filipino people in the run-up to the next national elections.

Inspired by the moves of U.S. journalists on their coverage of gun violence, more than 300 journalists and 40 news organizations signed the pledge to show their commitment to fact-based election coverage and monitor election campaigns to ensure the integrity of the elections in 2022.

“As journalists reporting on another critical moment for our country, we have a duty to provide accurate, reliable and essential information that will empower voters and encourage public discussion and debate,” the pledge read.

Among those who signed were Ellen Tordesillas of VERA Files, Luis Teodoro of the Center for Media Freedom and Responsibility, Rappler CEO Maria Ressa, and Senior Vice President at ABS-CBN News Ma. Regina “Ging” Reyes and the National Union of Journalists of the Philippines. They also included community and independent journalists who are putting forward stories from the ground.

Among the points of commitment mentioned in the pledge is the commitment to “highlight the efforts of the public and private sectors to uphold the honesty and integrity of elections.” 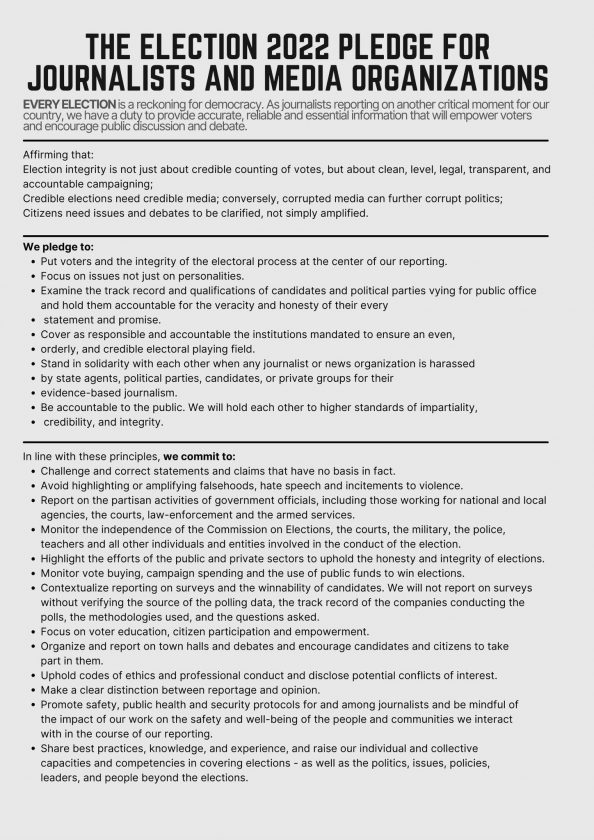 Covering under a pandemic, banned from Malacanang

Rappler reporter Pia Ranada said it is important to note that Duterte’s antagonism towards critical reportage may rub off on other possible candidates.

Their news organizations have been repeatedly “shut down” by former presidential aide and now Sen. Christopher Go as they are not included in his group chats with members of the press and do not reply to their messages.

“I think it’s important that we do it right then and there, we correct that mindset where politicians can just shoo aside reporters they don’t like,” Ranada said.

Media freedom, she added, should also be an election issue and ask candidates’ stand on it. This, she said, is an opportunity “to take back our rights” as candidates need every number they can get to win.

Under the Duterte administration, Ranada, who covers the Malacañang beat for Rappler, was subjected to troll attacks on a massive scale.

ABS-CBN reporter Jeff Canoy said while they are “still alive,” people who rely on their television for information felt the impacts of their network shutdown even more, who were “deprived of information that might have saved lives.”

Communities were unaware of incoming typhoons and that many people were not connected to the internet for news and that their reports now are mostly able to reach those considered as privileged enough to have cable and internet access, said Canoy.

“And with the continued attacks on press freedom, our democratic space is clearly getting smaller and smaller each day,” he said.

The election pledge also stated the commitment to show support for individual journalists or news organizations who are being subjected to harassment or other forms of attacks.

“We pledge to: stand in solidarity with each other when any journalist or news organization is harassed by state agents, political parties, candidates, or private groups for their evidence-based journalism,” the pledge read.

MindaNews Editor Carolyn Arguillas shared how survival is a major concern among the community media in Mindanao.

There were small newspapers that stopped their operations last year. Others have resumed a year later but with a downsized workforce.

Journalists who lost their jobs, said Francis Allan Angelo, editor-in-chief of the Daily Guardian Iloilo, have become freelancers and would “give in to political pressure” in order to survive.

Even ABS-CBN’s shutdown was felt among Mindanao journalists, with hundreds of workers in their regional stations left without jobs. Arguillas described the network shutdown as a “national tragedy” among ranks of journalists.

Aside from the commitment to highlight efforts of sectors to uphold the integrity of the election and the affirmation to stand in solidarity with each other when co-journalists face attacks, the pledge also stated the commitment to make a clear distinction between reportage and opinion.

“We commit to share best practices, knowledge, and experience, and raise our individual and collective capacities and competencies in covering elections – as well as the politics, issues, policies, leaders, and people beyond the elections,” the pledge read. (JJE, RVO)