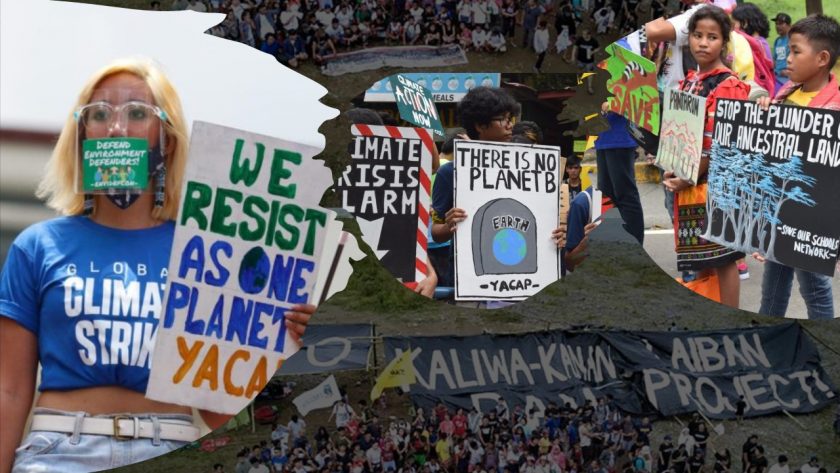 MANILA — If President Rodrigo Duterte’s last and longest State of the Nation Address is any indication, the rest of his remaining months in office may just be as deadly as in his last five years in office for many Filipino environment defenders.

“Duterte’s speech was violent. He allotted a lot of time talking about his war on drugs and counter-insurgency measures even his ad-libs were about ‘kill, kill, kill.’ So, it is not surprising that his five years were actually the five deadliest years for environmental defenders post-EDSA,” Kalikasan national coordinator and convenor of the Environmental Defenders Office Leon Dulce said in a forum assessing Duterte’s environmental agenda, July 29. 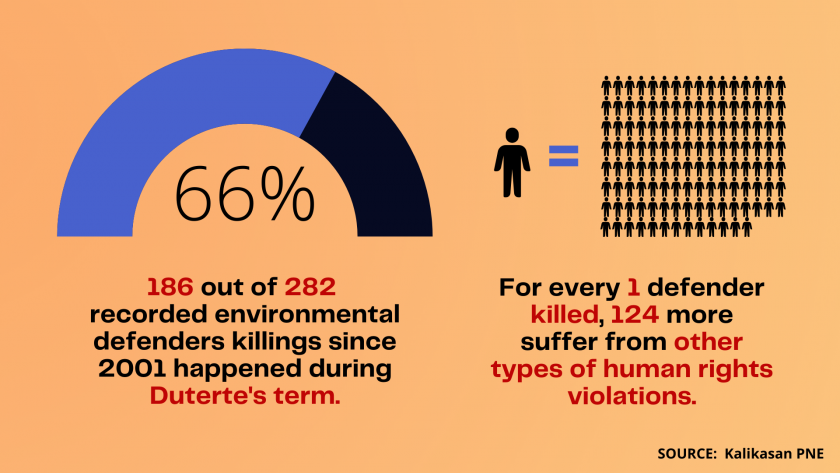 Kalikasan said killings of environmental defenders under the Duterte administration account for 66 percent of the 282 recorded killings since 2001. They also noted that for every one environmental defender killed, 124 more suffer from other types of human rights violations. Among these include displacement, harassment, threats and intimidation, illegal arrests, and detention, among others.

The Philippines ranked first and second in the world’s most dangerous place for environmental activists in 2018 and 2019, respectively, according to London-based watchdog Global Witness.

The situation is graver now, said environmental advocates with the passing of the Anti-Terrorism Act of 2020.

“When one of the most authoritarian laws that systematize crackdowns against critics (is passed), environmental defenders were not spared. As a matter of fact, the first people charged (for violating the terror law) were two indigenous Aeta who were fighting against development aggression projects in Central Luzon,” Dulce said.

Charges against the two Aeta farmers were later dismissed due to lack of evidence.

Threats against the environment

Nature’s heroes, said Dulce, have been leading campaigns for the protection of at least 6.2 million hectares of seascapes and landscapes that are environmentally critical in the country.

These ecological frontiers provide ecosystem services that can yield about $22 billion in value including carbon regulation, greenhouse gases, regulation of floodwaters, provision of clean water, soil erosion control, and more.

“Their work is very important and yet, they are treated as terrorists under the Duterte administration,” said Dulce.

These include Randy and Puroy Dela Cruz, who were killed during “Bloody Sunday.” The two were Dumagat environmental defenders who fought against the Kaliwa Dam project in Rizal, Quezon.

Months after their deaths, they were vindicated as Congress released a cease and desist order against Kaliwa Dam due to their failure of acquiring free prior informed consent from the indigenous people of Dumagat.

“Imagine if we unite and defend the environment with these unsung heroes, we can really save millions of hectares of landscapes and seascapes. In Duterte’s last year, we need to unite and end this system of violence against the environment and those who defend it,” said Dulce. “We have the opportunity to elect champions of the environment in the upcoming 2022 elections.

National Coordinator of Youth Advocates for Climate Action Philippines (YACAP) Xian Guevarra said no one is safe — even those who are calling to “save the Earth, save the environment.”

After YACAP’s environment strike #NoMoreEmptyPromises on March 19, Guevarra said there were intelligence agents who went to the area looking for their office.

Jordan Fronda, research and advocacy coordinator of the Center for Environmental Concerns – Philippines (CEC), said one of the ways to protect environmental defenders is the passing of the Environmental Defense Act.

Progressive partylists under the umbrella of Makabayan Coalition filed House Bill 8170 to strengthen existing regulations and institute new mechanisms that will “improve the vital work of environmental defense and uphold the constitutional right of the Filipino people to a balanced and healthful ecology,” the explanatory note read.

Fronda said the bill aims to recognize environmental defenders and provide conditions that will protect them and their role in defending the environment.

The bill, however, was not certified urgent by President Duterte in his last State of the Nation Address.

Demanding accountability, Dolomite not a solution

During Duterte’s last address as president, climate action, too, was not mentioned.

“We were looking forward to anything or just a sliver of climate action plans because kidding aside, President Duterte is one of the best speakers internationally when it comes to climate actions,” said Guevarra.

If at all, Duterte did mention the rehabilitation of Manila Bay. But for young environmental defenders like those in YACAP, the Dolomite project will not promote mental health wellness but rather bring anxiety.

“It’s very problematic how the solutions of our government are hinged on an unscientific and unfound basis,” Guevarra said, adding that scientists have been going on for years on how to rehabilitate Manila bay but the country was instead given dolomite.

He added, “we need to unite and demand accountability from major polluters to see concrete and tangible results.” (JJE, RVO)