Aid could have been provided if not for ridiculous spending

In light of the COA report, Bulatlat is revisiting the ridiculous spending of the Duterte administration when it should be pouring its attention to defeating this pandemic.

MANILA – The recent report of state auditors flagging billions of unutilized public funds intended for the government’s pandemic response has left the country baffled – where did all these unaccounted funds go to when the demands for due, timely, and sufficient social protection and assistance to health workers, displaced workers, and poor families have practically received pittance if not none at all.

The apparent poor handling of at least $1.33 billion funds, which the Commission on Audit flagged, could have “contributed to the challenges encountered and missed opportunities” by the health department during the state of national emergency.

On the ground, health workers are bearing the brunt and all the recognitions they have been getting are but lip service as they continue their work without hazard pay and other due benefits as mandated by Philippine laws.

Patients, on the other hand, are now being treated in parking lots and hospital corridors as the country’s health care facilities are swamped with COVID-19 cases.

This surge has been attributed to the deadlier and more transmissible Delta variant of the virus. Now, alarms have been raised as the first case of the Lambda variant was recorded earlier this week. This variant is considered to be of interest by the World Health Organization as it is said to be more infectious and is resistant to most vaccines.

The Philippine capital and several provinces that recorded a high number of cases have reverted to a stricter lockdown. Although Metro Manila has lowered its classification to modified enhanced community quarantine (MECQ), the government is still uncertain and indecisive on its response to contain the number of cases and address the desperate situation of health facilities.

What happened to the pandemic funds?

When the House of Representatives passed the P405.6 billion ($8 billion) Bayanihan To Arise As One bill (Bayanihan 3) on third and final reading, it was still lacking the certificate of availability of funds from the Bureau of Treasury. This document ensures that the government can fully fund a project. 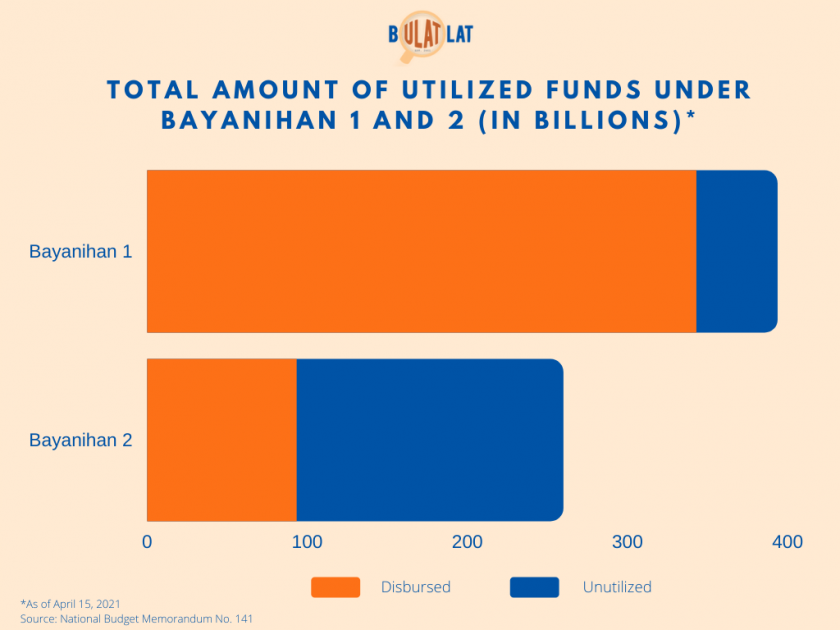 Likewise, representatives in Congress are still uncertain where funds for two out of its three phases will be sourced from. Its Senate counterpart has not moved an inch, as lawmakers are still making inquiries if the government should first fully utilize funds from the previous Bayanihan programs.

Read: Why the ‘ayuda for all’ bill must advance

This begs the question, where did the money go and why do we still need more of it when it seems like we have savings from previous funds?

In September 2020, the government’s move to dump piles of crushed dolomite along the shores of Manila Bay caused an uproar among citizens. Critics and government officials alike deemed the P389 million ($7 million) “beach nourishment” unnecessary to be pursued amid a global health crisis.

The money spent could have provided food to at least 80,000 families affected by the pandemic or necessary gadgets for Filipino students according to Vice President Leni Robredo and education secretary Leonor Briones, respectively.

Also, in May 2021, an additional P265 million ($5 million) was allotted for the second phase of the project, which is expected to be finished by the third quarter of 2022.

In the same month, over P10 billion ($198 million) was turned over to the National Task Force to End Local Communist Armed Conflict, which is over half of their P19 billion ($377 million) 2021 budget.

Sen. Franklin Drilon questioned the hastened release of the funding when, in contrast, the rehabilitation funds for Marawi’s rehabilitation were “coming out so slowly.” Other senators are pushing for the defunding of the government’s counterinsurgency arm, saying it is a “waste of people’s money.”

Meanwhile, out of the more than P700 billion (US$15 billion) government foreign borrowing as of March 2021, only around P60 billion (US$1.2 billion) or nine percent, is intended for projects that would address the health crisis in the country. 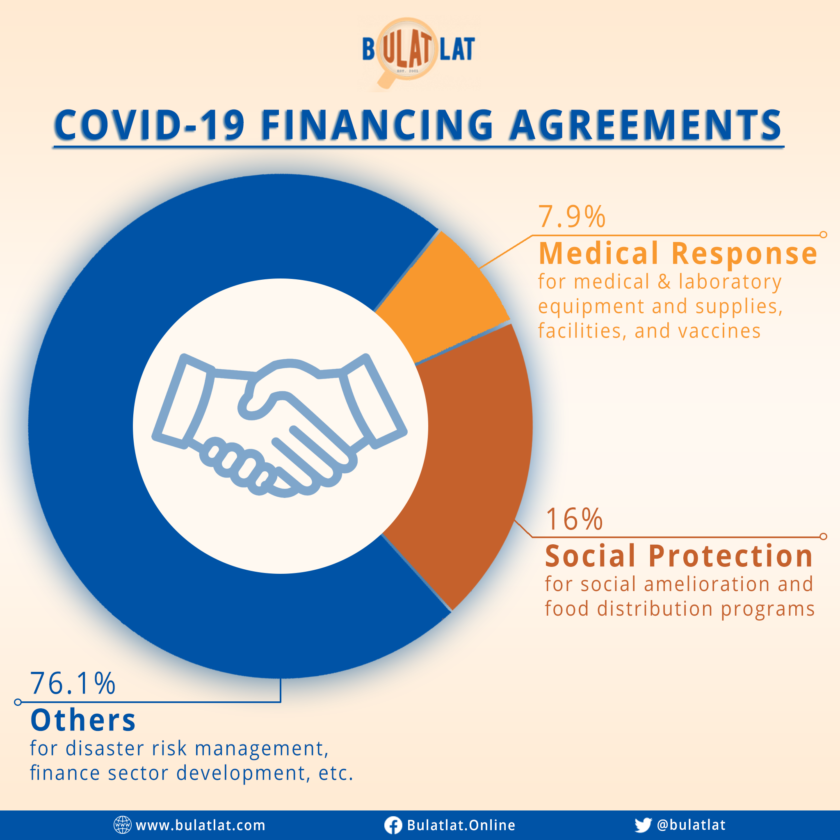 Read: Majority of COVID-19 loans not used for pandemic response

Bulatlat research also revealed that a third of the loans will be used for infrastructure.

By the end of its term, Ibon Foundation estimated that the Duterte administration would have borrowed P11.22 trillion (US$226 billion), covering the years 2017 to 2022, an amount equivalent to the gross borrowings of the entire post-Marcos period from 1986 to 2016.

With billions of pandemic funds apparently unaccounted and the Filipino people buried in debt, the Philippine government was not at all enthusiastic over the new rounds of cash aid distribution, where affected families are only able to avail of somewhere between $19 to $80 per family.

Prior to the lockdown, an estimated 400,000 workers have been left without any source of income.

“These are people who have lost their livelihoods, they are hungry, they are in need. That’s why [the government] has to recompute their statistics, to know how many actually are affected. Especially now that Laguna and Bataan are under ECQ, where a huge number of workers are residing,” said Kilusang Mayo Uno Secretary General Jerome Adonis.

The labor group called on the Labor, Budget, And Finance departments to review the savings from the past fiscal year, which the group believes to be larger than declared. Moreover, they also appealed for the swift disbursement of funds to bolster economic aid efforts.

This was echoed by farmers’ group Kilusang Magbubukid ng Pilipinas which urged Congress to include a sufficient budget for aid and economic stimulus in the Bayanihan 3 bill.

“The government has no plan with regard to providing cash and economic aid for the population, especially sectors that will be affected by the upcoming hard lockdown. It seems that the people’s demand for ayuda and subsidies were muted by the government and the Inter-Agency Task Force,” decried KMP in a statement.

In February 2021, Ibon Foundation proposed a P200 billion financial assistance with zero or low-interest rate and collateral-free loans to Filipino-owned and domestically-oriented MSMEs.

“[We] identified a universe of at least P2.9 trillion in funds from which realignments can be made, including P1 trillion in emergency bonds and other government securities, P391.9 billion in immediate revenues from progressive taxes especially a wealth tax, and at least P333 billion more from a land value tax,” the independent think-tank said.

The group said that together with the implementation of effective pandemic response measures, the dire situation of tens of millions of Filipinos should be more than enough reason for the government to immediately distribute much-needed and substantial financial aid.

“If it wanted to, the government could meet the people’s demands for cash subsidies, such as the P10,000 ($198) emergency cash assistance and P100 ($2) wage subsidy, instead of prioritizing debt, military, and infrastructure spending,” they explained. (JJE, RTS, RVO)