A second look at the COA findings 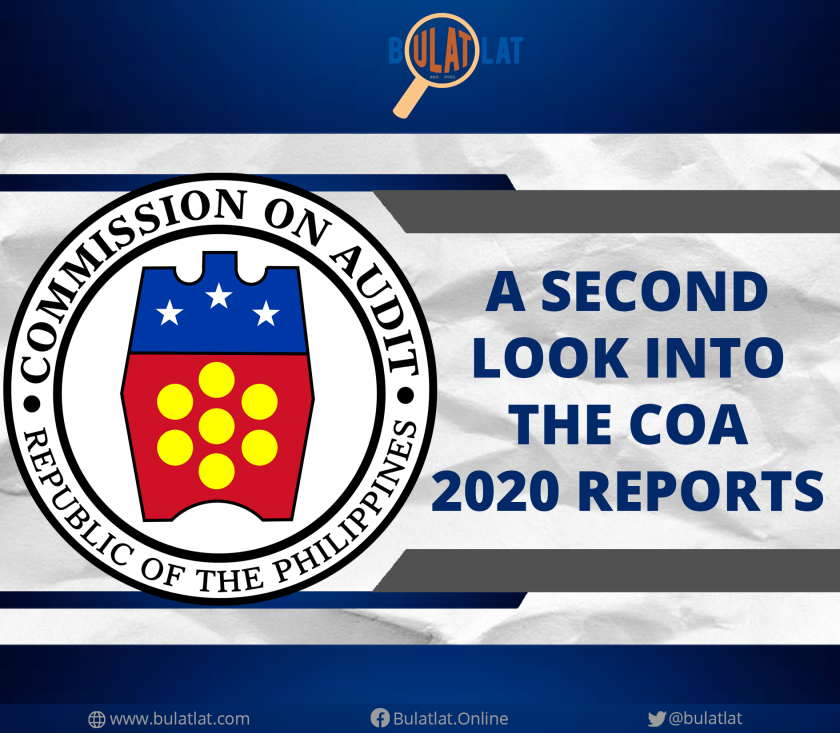 Bulatlat compiled some of the highlights of the initial findings of the Commission on Audit, where state auditors flagged billions of public funds that were either unaccounted for or delayed in its implementation. A total of P124.65 billion ($2.5 billion) were flagged from these nine government agencies alone, which could have been used to provide 12.4 million pandemic-hit families with much-needed aid amounting to P10,000 ($200). 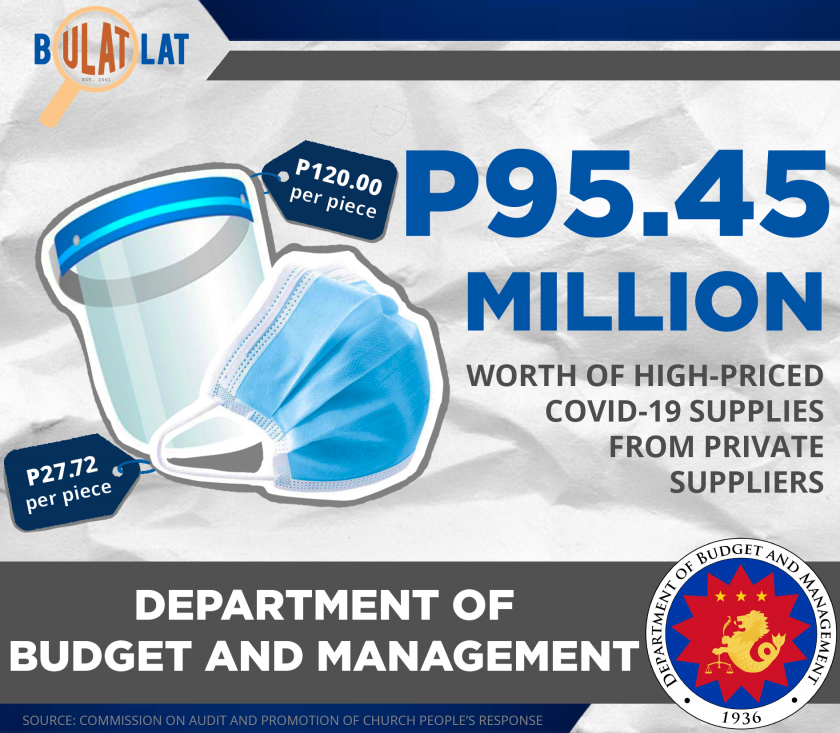 The Commission on Audit questioned the Department of Budget and Management for procuring P95.45 million ($1.9 million) worth of high-priced COVID-19 supplies from private suppliers. These are now slow-moving and stored in depots as client agencies now refuse to buy them. The supplies include face masks worth P27.72 ($0.50) per piece and face shields worth P120 ($2.40) per piece, significantly higher than the Department of Health’s suggested retail price of P2 to P4 per piece of face mask and P26 ($0.50) to P50 ($1) per face shield. 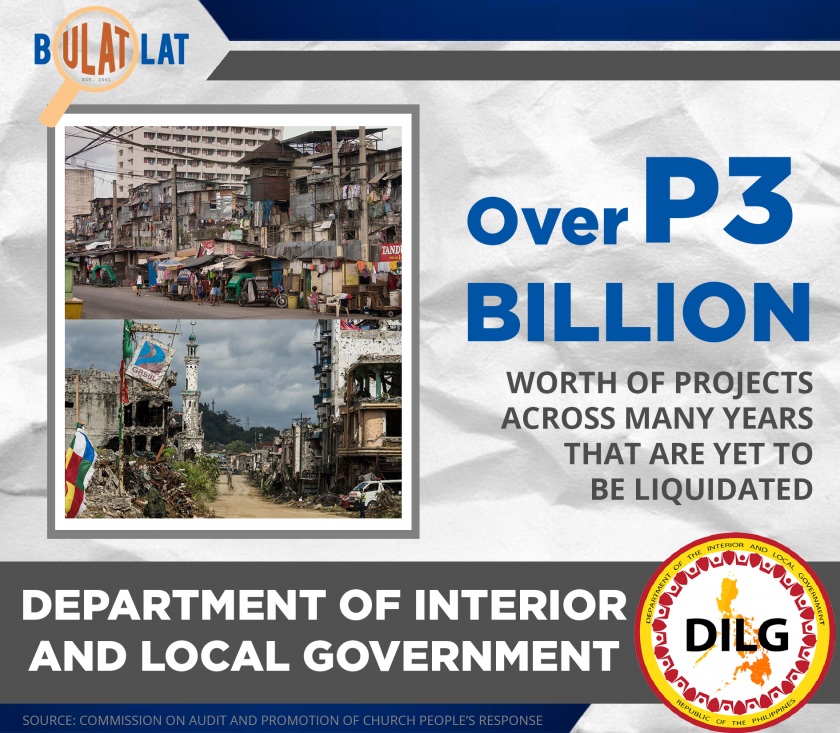 COA flagged the Department of Internal and Local Government for having over P3 billion ($60 million) worth of projects across many years that have not been completely liquidated. These include fund transfers to local government units worth P2.6 billion ($52.1 million), supposedly for poor and conflict-affected communities. 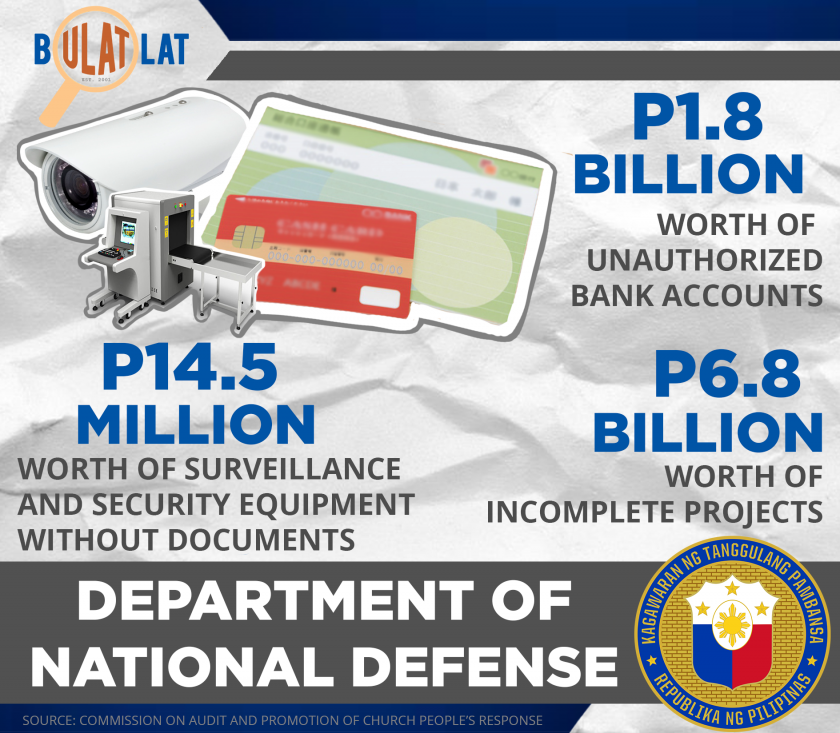 The Department of National Defense has been questioned for its P14.5 million ($291,000) worth of surveillance and security equipment procured without the necessary requirements. The agency has also been flagged for having 20 unauthorized bank accounts worth P1.8 billion ($36 million), and various incomplete projects amounting to P6.8 billion ($136.4 million). 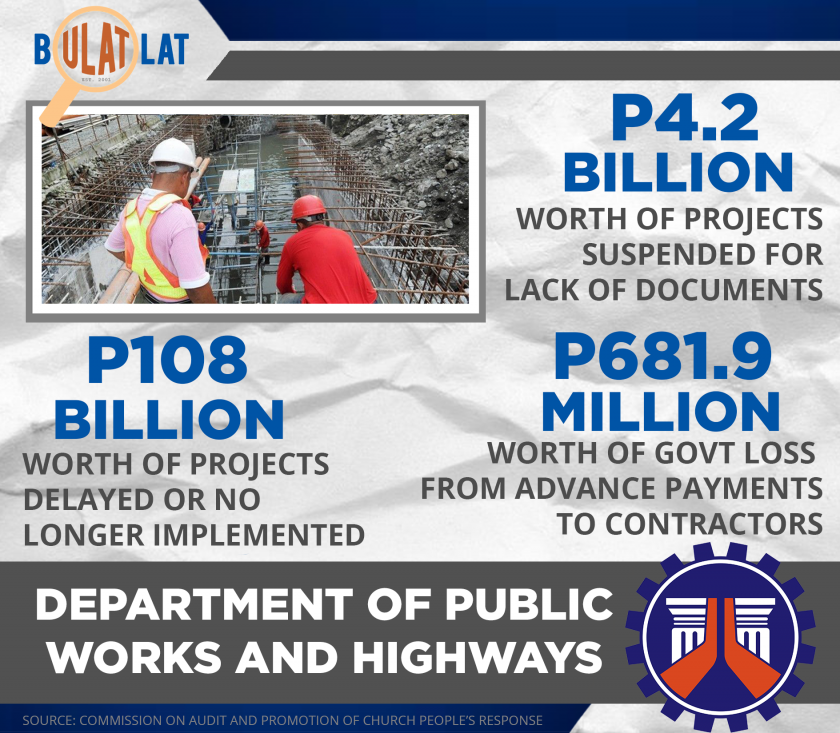 COA has suspended the Department of Public Works and Highways’ P4.2 billion ($84 million) worth of disbursements for infrastructure projects made with incomplete supporting documents. It was noted that the agency’s 3,283 infrastructure projects worth P108 billion ($2.2 billion) have been delayed or are no longer implemented due to its lack of coordination with local government units and other agencies. COA also noted that the government had lost over P681.9 million ($13.7 million) of advance payments to the agency’s contractors. 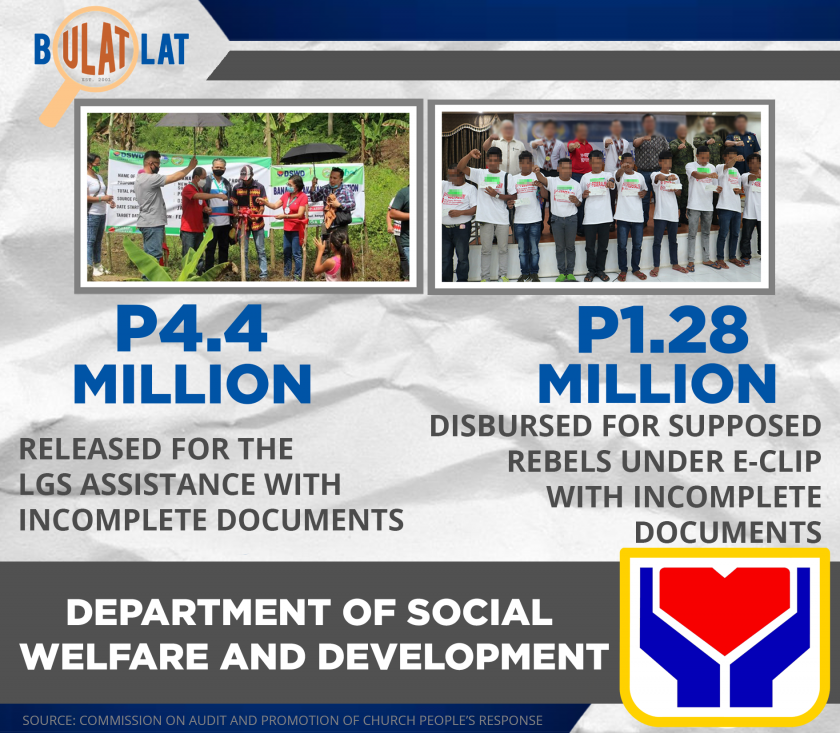 COA questioned the Department of Social Welfare and Development regarding the validity of the agency’s transactions that were carried out with inadequate documentation. These transactions include the release of P4.4 million ($88,200) for the Livelihood Settlement Grant (LSG) assistance and disbursement of P1.28 million ($26,000) for 330 supposed rebels under the Enhanced Comprehensive Local Integration Program (E-CLIP). The supposed rebels do not have government-issued IDs, and their so-called validity is limited to a certificate issued by the Joint AFP-PNP Intelligence Committee. 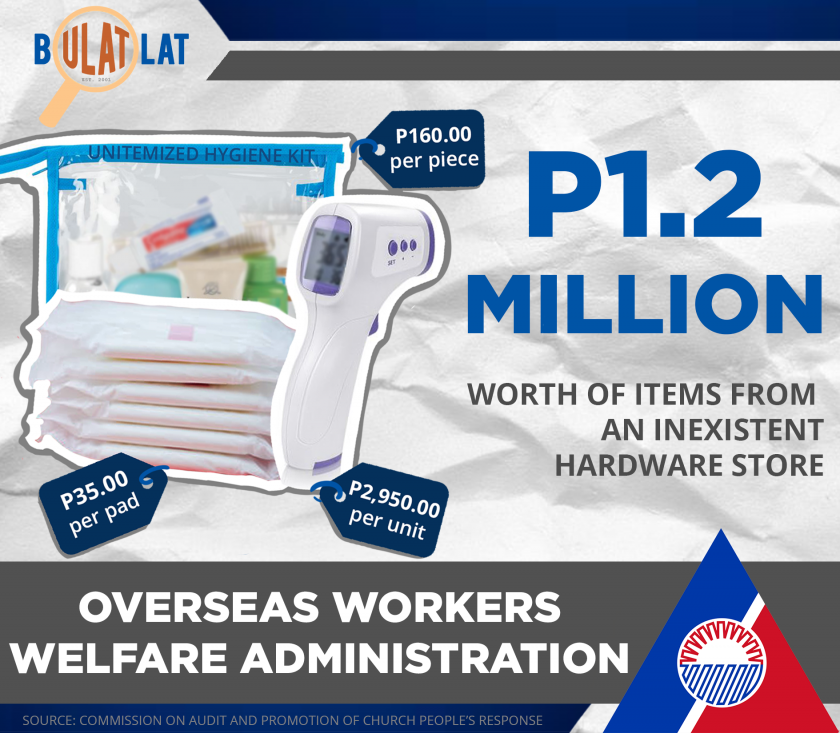 COA questioned the Overseas Workers Welfare Administration for its expenditures worth P1.2 million ($24,000) to procure high-priced sanitary napkins, hygiene kits, and thermal scanners from an inexistent hardware store. In the audit, the sanitary napkins cost up to P35 ($0.70) per pad, which can otherwise be bought for P5 to P8. The thermal scanners cost P2,950 ($60) per unit, considerably higher than the P400 ($8) to P800 ($12) scanners that are commercially available. On the other hand, the hygiene kits are worth P160 ($3) each, with contents that were not itemized. 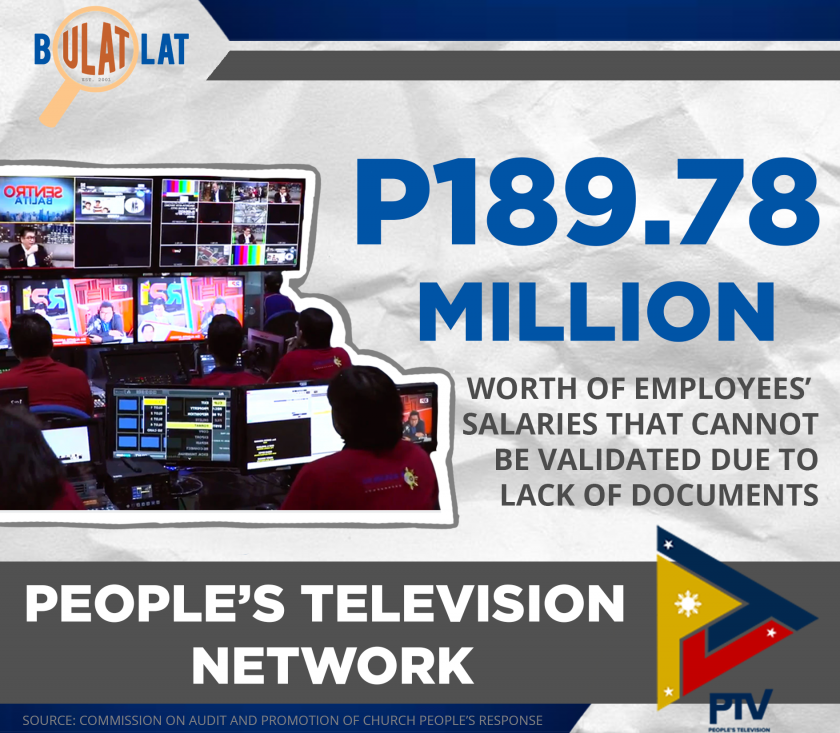 The People’s Television Network has been flagged by COA for releasing P1.8 million ($36,000) in salaries to its employees without the approval of the Office of the President. A total of P7.4 million ($148,400) cash advances for travel and other expenses was also reported to be unliquidated. 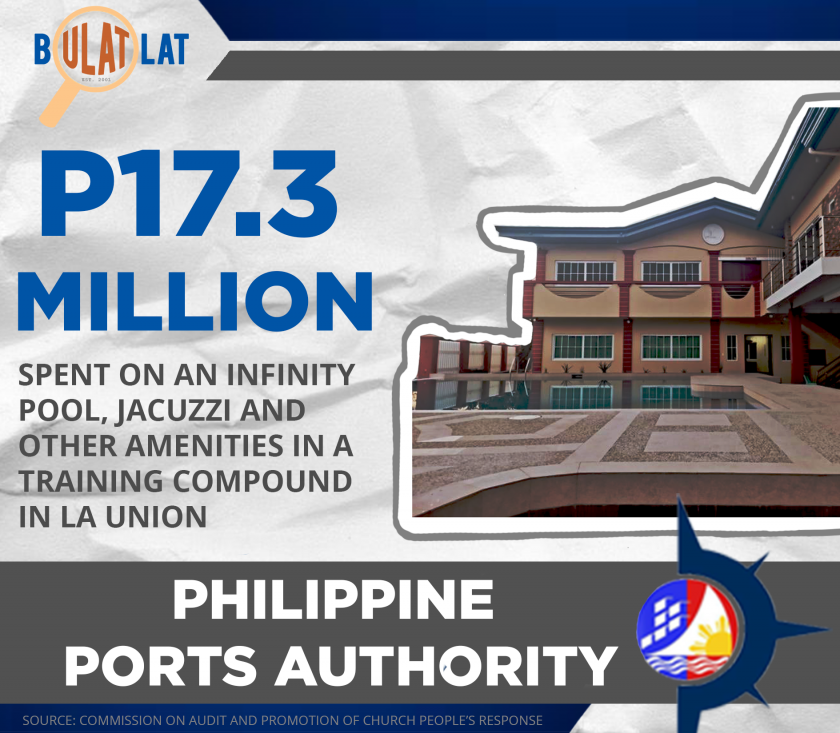 COA has called out the Philippine Ports Authority for spending P6.5 million ($130,000) on an infinity pool and jacuzzi in its training compound in San Fernando, La Union. The agency also spent P10.8 million ($216,600) for its other amenities such as guest rooms, pergola, and a decorative rockwall. 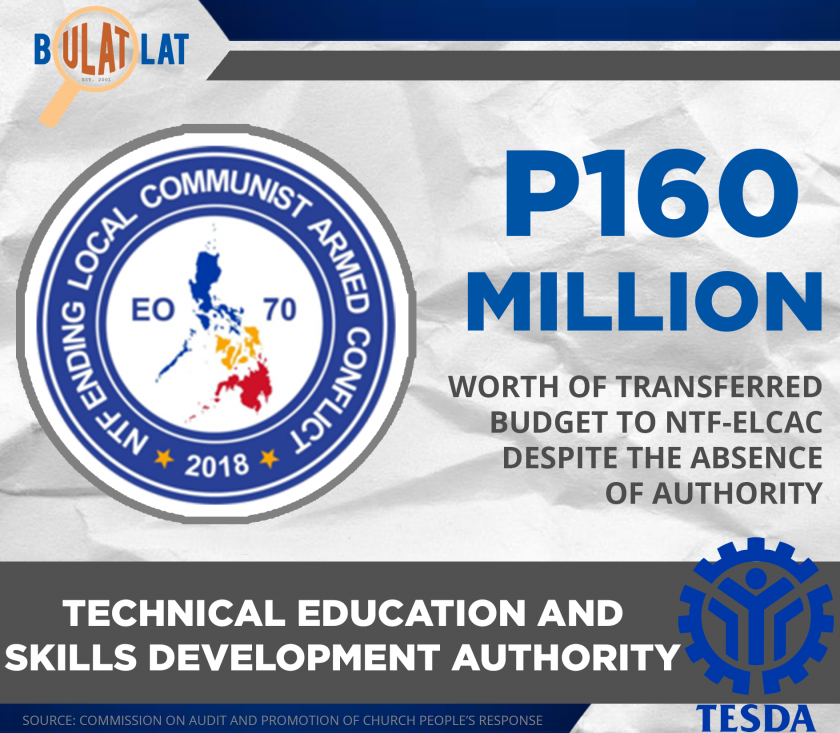 The Technical Education and Services Development Authority has been questioned for transferring P160 million ($3.2 million) to the NTF-ELCAC, despite the agency’s absence of authority to do so. The biggest chunk, worth P41 million ( went to its regional office in Davao, an act COA found to be highly questionable. TESDA’s budget did not originally include activities for the NTF-ELCAC. (JJE, RVO)