You Are Here: Home → 2021 → September → 4 → Community kitchens feed the hungry during lockdown

Read more stories from this series:

MANILA — Since March 2020 when lockdowns began in the greater Manila and surrounding areas, the most immediately hard hit were the poor. The lockdowns brought them hunger.

“We lost our work. How can one survive without a job for more than a year?” said Ligaya Mariscostes, 61, a resident of Marikina for more than 30 years now and team leader in one of the many community kitchens that arose in Marikina in response to lockdowns.

Right after the order for lockdown came out, the question “wala ba tayong pwedeng gawin?” (is there nothing we can do?) was asked among a group of like-minded townmates in Marikina, prompting three individuals, two of them women, to organize what would become a network of volunteer-driven community kitchens. The daughter of one of the conveners would later help spark an explosion of community pantries.

They started with eight community kitchens at the beginning of the lockdown in March 2020. It increased to 15, then 25 then 30, peaking to more than 40 during the flooding brought by Typhoon Ulysses. There were times in 2020 that community kitchens stopped operating for lack of donations. But as of this writing, various definitions of community quarantines with “heightened restrictions” continue to be in force. Hunger continues. There is still not much aid coming from the government. Community kitchens struggle to keep cooking.

In practice, the “community kitchen” is a scheduled coming together of volunteers, armed with borrowed kitchen equipment and utensils, to cook food using ingredients from donations and their own contributions. After cooking is community feeding. As long as organizers receive donations and volunteers rise to the call to sort and help distribute it to volunteer cooks of community kitchens, the community cooking and feeding can happen.

Read: Food remains out of reach for the poor

More community kitchens were “activated” by volunteers when portions of Marikina were inundated with water and mud after a typhoon hit the country in November last year. With the wide devastation brought about by Typhoon Ulysses, they focused on cooking for the devastated communities in the low-lying areas of IVC, Calumpang, San Roque, Sto. Nino, Malanday, Concepcion Uno, Tumana and Nangka. In fact, most of their community kitchens were located in flood-prone areas of this city.

In their social media account, they call this non-government and voluntary initiative of volunteers as Bayanihang Marikenyo at Marikenya.

Bayanihan is a Filipino tradition of helping each other out in times of need. For this particular bayanihan of locals of Marikina, community kitchens and community feeding appear to be one of their main activities in response to COVID-19. They themselves identified and prioritized the poor communities “most affected by work stoppage and losses of livelihood” in their town.

Early May this year, the volunteers posted in their social media account that they are “nameless and faceless.” They steered clear and even warned of politicians trying to grab credit for their activities and donations of others. The volunteers regard themselves at best as “bridges” who bring the donations to locals they know of as truly in need. They expressed gratitude for all the volunteers and donors who keep the community kitchens going.

Marylou Fernandez, one of the three who spearheaded the Bayanihang Kusina, also thanked today’s technology because, with it, people from other places can send help such as donations in kind without leaving their homes.

Although these mutual help groups avoid pigeonholing the task of running the community kitchen as a responsibility of women, it happened that most of the community kitchens are run by women. Mariscostes for example, team leader in a flood-prone riverside community in Nangka, explains that it happens like that because women are more frequently left at home. “Our cooks are basically mothers prioritizing the family welfare.” 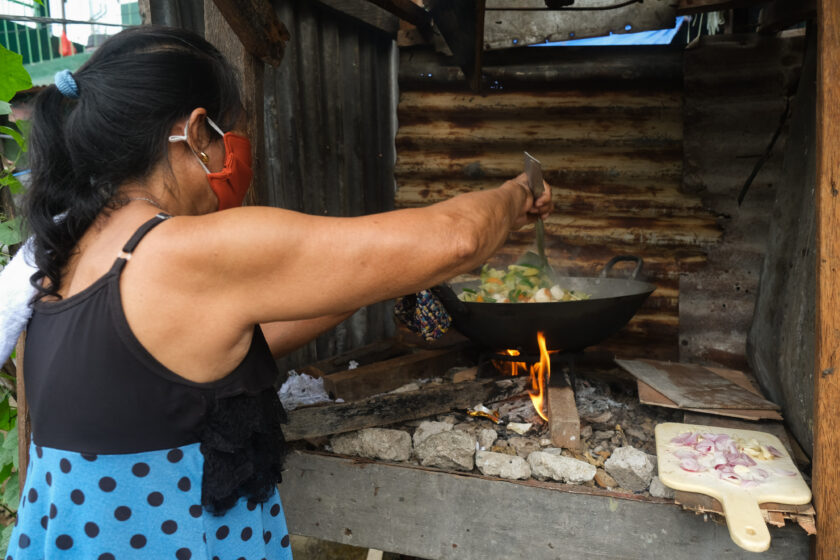 Though living below the poverty line and striving under the harshest conditions, urban poor women in Payatas, Quezon City are finding means to get by in the midst of a pandemic. They have found themselves on the frontlines to defend their family and the entire community from the pangs of uncertainty and hunger.

The Payatas community kitchen started last April 2020. From two chapters, they now have eleven and they have been feeding more than 300 individuals every week of food sharing.

Wena Liscano, 32, said they borrowed kitchen equipment from neighbors and friends as soon as they received the first batch of donated vegetables to their community. Their neighbors were more than willing to share what little they have to ensure the community kitchen’s success, including the extra firewood they had, ingredients, their least coins, and their own time by assisting in the kitchen.

Residents set up their community kitchen in their basketball court, which the government did not allow to be used under a strict lockdown. They gathered here to cook warm meals in the community even if they themselves were faced with work retrenchments and lesser sales due to the pandemic.

“It had a very big impact on us. Our horizons, too, broaden because I have met a lot of people and it eased my anxieties,” said Liscano.

They brought the cooked meals to their neighbor’s doors, and it warmed their hearts to have also eased the uncertainties that COVID-19 brought to many urban poor families, with many losing their jobs and livelihoods.

In Payatas, women leaders also use their produce from their urban gardens to provide warm meals through their community kitchen.

“It is organic. It was delicious and very nutritious,” she said.

For most communities, Kadamay secretary general Mimi Doringo said efforts began with small donations from friends. For Sitio San Roque, an urban poor community in Quezon City, the deluge in donations began after residents were arrested over a spontaneous protest action. Apart from cash, they also received vegetables and fish.

“The local organization really planned it. The goods they were getting were too small to cover everyone so they thought of cooking it first before distributing it to those in need,” said Doringo, adding that they did not have to be Kadamay members to get warm meals.

Doringo said these community kitchens were a testament to the poor pandemic response of the government. They also coupled it with calls for better response as seen in Sitio San Roque. This, however, did not sit well for government officials and the police – the latter even threatening to shut down their kitchens if these calls would not stop.

Last May 1 Labor Day in 2020, the community kitchens of Marikina elicited public sympathy when the police arrested and jailed 10 volunteers. The police charged them as “quarantine violators.” But it turned out the main beef the police had against the volunteers were the placards they held. They were calling on the government for aid and more appropriate and healthy responses to COVID.

The strict lockdown guidelines had prohibited the holding of protest rallies and demonstrations. It came with “overzealous” police operations proclaiming “zero-tolerance for quarantine violators.”

The cases filed by the police against the 10 kitchen volunteers were dismissed in court by February 2021. Their “zero-tolerance” did not dampen the community kitchens nor the subsequent mass actions by various groups calling for government aid.

Even if they meant to intimidate the people into abiding by the strict lockdowns, the people in other parts of the country have started holding mass protests and gatherings, with social distancing and health protocols such as wearing face masks.

For Maricostes and her team in Nangka, their community kitchens helped them achieve a better sense of community with their neighbors. Before, they lived without knowing much about their neighbors. Each is busy finding out ways to survive.

The pressure to address hunger and keep the community kitchens going even if there would be times they will encounter “donor fatigue” has also inspired them into collective vegetable farming.

They live in a community along the Marikina River, on a stretch of land that used to be called “tumana.” It used to be everyone’s vegetable farm until it became a relocation site for informal settlers in 2002. It then became home to families of workers and odd jobbers such as drivers, construction workers, and public vendors.

Living by the river, their communities are the first to be swept by raging waters that can go as high as three stories during strong typhoons. Yet, they opt to live there despite the risks because it is one of the few places they can hope to afford. Why are they pushed to live in danger zones? This is for another story. But, it already partly explains why the police are leery and have started surveillance even of community kitchens and community pantries.

To the women gathering from time to time to cook and feed their community, the issue started out simply as addressing the neighbors’ hunger. But as Mariscostes said, it can’t go like this, that the people are jobless, or that the aid the government finally released was sorely lacking.