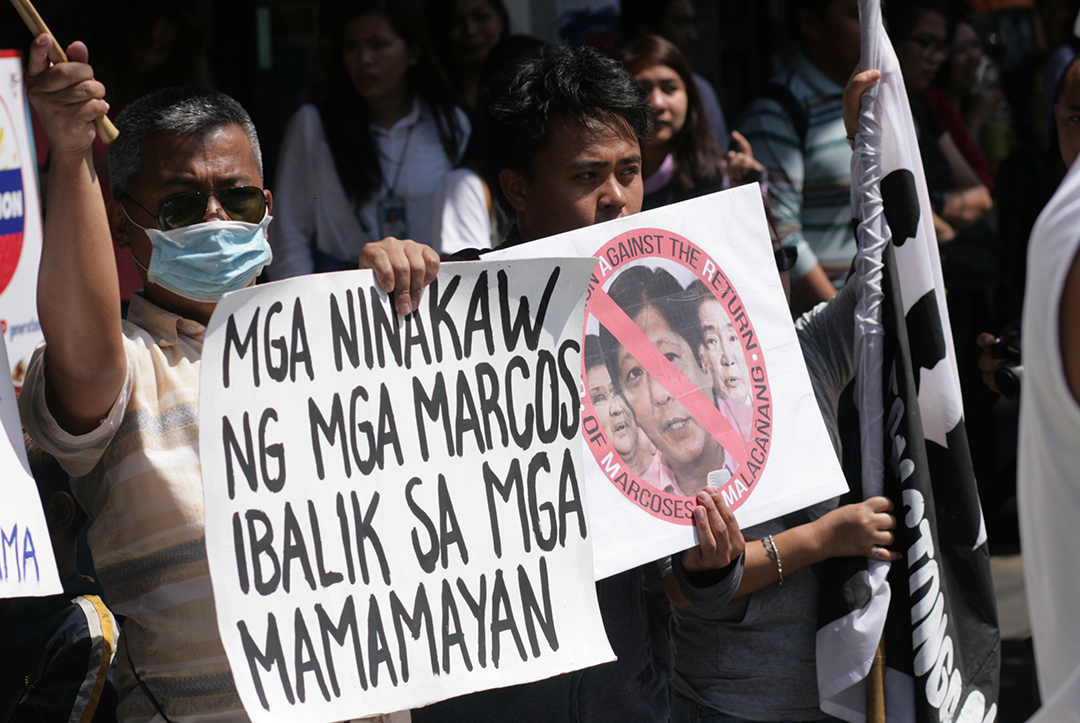 MANILA – Several groups denounced Ferdinand “Bongbong” Marcos Jr.’s intention to run for president of the country. The son of the ousted dictator filed his certificate of candidacy yesterday, Oct. 5.

The Campaign Against the Return of the Marcoses and Martial Law (Carmma) said Marcos’s presidential bid “is a brazen show of disregard and contempt for the thousands of Filipinos killed, disappeared, tortured, displaced and violated, and the Filipino nation whose economy was plundered and wrecked during the Marcos dictatorship.”

CARMMA Convenor and former Social Welfare and Development Secretary Judy Taguiwalo said that the Marcos family has long been seeking to reclaim the highest position in the land even after the people ousted them from power. “And today, their shameless gall to return to the highest office in government is in full display,” she said in a statement.

Taguiwalo said that by running as president, Marcos is spitting on the graves of the dead and on the faces of the victims of the Marcos dictatorship. She reiterated that the Marcos family, despite billions worth of treasure and gold that they have plundered, has not given worthwhile compensation to the victims of martial law.

“Last weeks’ Sandiganbayan ruling ordering the return of the Marcos’ ill-gotten wealth worth more than P100 million ($1.9 million) that was deposited by former Traders Royal Bank is but a small showcase of the largesse and greed of the Marcoses. His bid will undoubtedly be funded through the plundered funds from the nation’s coffers from the time of his father’s dictatorship,” Taguiwalo added.

Netizens took to Twitter last night to express their strong opposition to Marcos. As of 11:00 p.m. last night, the #NeverAgain hashtag was trending on Twitter.

The full circle comeback we should never allow to happen. #NeverForget #NeverAgain pic.twitter.com/76z9Gt1ezr

With Bongbong’s presidential bid, Filipinos have yet another opportunity to reject the Marcoses and what they stand for: Dictatorship, tyranny, cronyism, corruption, and historical distortion.

Karapatan also assailed Marcos’s slogan “Babangon muli” (to rise again) saying that this does not only mean a bid for the Marcoses to return to Malacañang but “an insidious call to revive their despicable brand of governance — embezzlement of public funds, wholesale violations of people’s rights and civil liberties, and barefaced lies in historical distortions and denialism.”

Read: 5 testimonies you should read about Martial Law

Cordillera Human Rights Alliance said that during martial law, aside from funds being funneled into the accounts of the Marcos family and their cronies, it was also used to hamlet villages, burn and pillage communities like Beew, Tubo, Abra.

“The people have not forgotten how the Philippine Constabulary and the Philippine Army led by Captain Berrido burned down houses in the village, illegally arrested and tortured residents, killed a village leader and a pregnant woman, and wounded a four year-old child,” the group said.

The funds were also used to impose anti-people projects on communities like Chico Dam along the Chico River in Mt. Province and Kalinga.

“Macliing Dulag and many others were killed because of leading the strong people’s opposition (against these projects),” the group said.

Meanwhile, groups vowed to oppose and frustrate all efforts of the Marcoses to get back to Malacañang.

Karapatan said such efforts of the Marcoses to return to power is clearly aided no less by the Duterte administration.

Fides Lim, spokesperson of Kapatid, a support group of families and friends of political prisoners said, “The darkness brought by the dictatorship was not a tale. The family that was responsible for the killings, illegal detention, and gross human rights violations should not be in Malacañang again.”

She said the Marcoses have been engaging in historical revisionism with the support of Duterte which, she said is another tyrant “who allowed the burial of the late dictator Ferdinand Marcos in the Libingan ng mga Bayani.

“Voters should be vigilant against a Duterte-Marcos tandem whether this be via the presidential daughter and the dictator’s junior or even the President himself. It is a “shameless act by shameless people. Huwag na tayo magpa-gago uli,” said Lim. (RTS, RVO)