You Are Here: Home → 2021 → October → 21 → ‘Bungkalan’ in Lupang Ramos: The collective struggle for land and climate-resilient and community-led food production

‘Bungkalan’ in Lupang Ramos: The collective struggle for land and climate-resilient and community-led food production

At a disputed land in the province of Cavite, farmers are healing the land from decades of intensive unsustainable farming practices that led to soil degradation. On top of their daily toil of putting food on the table, they are also resisting attempts of eviction.

DASMARIÑAS, Cavite – Small, colorful flowers known to locals as Alas Diyes or Time Flowers can be found almost anywhere in the hundreds of hectares of the disputed Lupang Ramos in Dasmariñas, Cavite. They live even under the harshest weather, giving life and color to an estate that bore witness to the countless drought, not to mention the blood, sweat, and tears of farmers tilling it.

“I experienced being driven away here in Lupang Ramos, along with my farm tools. I was forcibly being evicted in the land I was tilling,” Herberto Candolia, a farmer in Lupang Ramos, told Bulatlat.

The land that Candolia, fondly called as Tatay Berting, and the rest of the Lupang Ramos residents are tilling has been the subject of a long-running agrarian dispute. Its ownership passed from one clan to another until the Supreme Court ruled in 2011, favoring a local landed family. The decision cited a Dasmariñas City ordinance that allowed the estate developer to convert it into a residential area. However, when the Sentro para sa Tunay na Repormang Agraryo (Sentra) took on the case two years later, its executive director Jobert Pahilga told Bulatlat that while the ordinance was indeed cited in the petitions filed by the Ramos family, a copy was never presented.

Still, farmers remained in the community, struggling to assert every inch of the disputed land. They cultivated it collectively both as a form of struggle and as a way of life. Through their farming methods, they healed the land of decades-old intensive farming that resulted in declining soil productivity which threatened their very basic right to food.

Tatay Berting was not yet a member of Kasama – Lupang Ramos, a grassroots organization in their community, when attempts to evict him from the disputed land happened. But he never gave up, even in the face of gun-toting goons. He would dare them, “Go, shoot me in the head.”

For Tatay Berting, the fight was way bigger than him. So when he soon became part of Kasama-LR, he felt the weight off his shoulders, now that he has neighbors and colleagues in the organization to help him.

Miriam Villanueva, who comes from one of the oldest families in LR, shared that through the years, monocropping and intensive use of chemical inputs compromised soil productivity. This made farmers even more reliant on chemical fertilizers to maintain the sugarcanes, making the land too acidic for other crops like rice and vegetables which are essential to the farmers’ food needs.

It dawned on farmers that they needed to heal the land they were fighting for, as they try to make it more productive. To do this, they recognized the need to consolidate their ranks. Kasama-LR, a grassroots farmers group, was formed in 2010 which did not only lead them in their fight for their land but also in their collective farming.

“All that is in my heart’s desire is to be able to till what is due to me. I do not dream of being rich, just enough for me to till a plot of land that I can show to my family, my grandchildren most especially,” said Tatay Berting.

With the help of Magsasaka at Siyentipiko para sa Pag-unlad ng Agrikultura (Masipag), a farmer-led network of agroecology advocates, the process of transformation began. This meant changing the dominant food and agricultural systems that have high external input and are resource-intensive, often resulting in massive deforestation, water scarcities, biodiversity loss, solid depletion and high levels of greenhouse gas emissions. They instead pushed for a community-led food production where social, economic, environmental and developmental dimensions are considered.

“The food producers are at the core of this community-led and people-centered management of the land cultivation, unlike in conventional production where the focus is on profit-making,” said Ryan Damaso of Masipag. 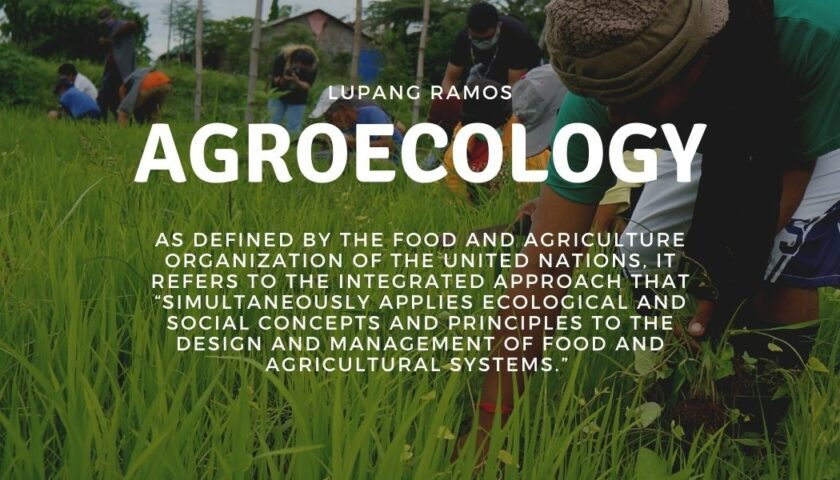 Masipag first met LR farmers in 2017 to conduct consultations and identify their main issues and needs. Apart from declining soil productivity, they also identified the lack of farm inputs, lack of water supply and the ongoing land struggle.

The network then conducted training on sustainable agriculture, which included principles and practices of agroecology, how it can be applied to the plots they were collectively tilling, and incorporate it into their traditional practices. At least 50 varieties of rice and other vegetable seeds were given to Kasama-LR to test which ones are most suitable.

Farmers practiced composting to improve soil quality. Stems and leaves gathered from harvesting corn or rice are left to decompose while indigenous microorganisms from rice water and decomposing fruits like pineapples and mangoes are harnessed. This, along with the shifting from commercial-chemical to organic fertilizers and pesticides, reduced their cost of production. 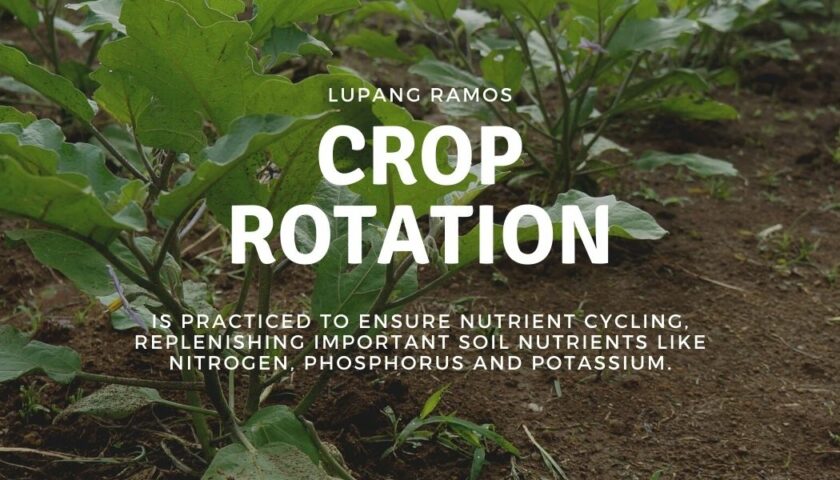 Crop rotation is also practiced to ensure nutrient cycling, replenishing important soil nutrients like nitrogen, phosphorus and potassium. For one, they plant legumes like string beans, mung beans and peanuts to replenish nitrogen in the soil. This also provides food for the farmers during the dry season as legumes and other produce like cassava and corn require minimal water. Crop diversification, on the other hand, ensures there will still be other vegetables that can be harvested when there is an outbreak of pests affecting certain crops. Both crop rotation and crop diversification are also crucial amid extreme weather events like droughts and pest outbreaks brought about by the worsening climate crisis. “Agroecology is not just a technique or technology but a process and way to achieve the rights of the farmers,” Damaso said.

Improvement of quality of life

Through their agroecology practice, LR farmers noticed how their lives improved. Their produce has not only brought food on their table, but are also being sold to nearby communities and residential areas.

But in the first months of the pandemic, Rosanna Aton, a farmer in Lupang Ramos, said her husband who works as a tricycle driver was among those affected. They managed to get by and put food on the table from the produce they were harvesting.

“We planted string beans, corn, and okra. We also sell our produce and we have regular customers in the market,” she said, adding that they did not experience hunger despite the difficulties.

Bananas and cassavas are also among their food staples. They would harvest kamote tops and cook it in coconut milk. They would only need to worry about their rice, Aton said.

More and more farmers are starting to transition toward an agroecological production system, appreciating the value of collective production more.

Apart from the climate-related problems, there is so much uncertainty in the lives of lupang ramos residents because of the threats stemming from the agrarian dispute. Now surrounded by commercial and industrial estates, the 372-hectare agricultural land in Dasmariñas, Cavite was formerly managed by the Spanish friars until it was transferred to American colonizers, where it was dubbed “Lupang Kano.”

In 1965, a local landed patriarch Emerito Ramos Sr. acquired the land through his real estate company, Emerito Ramos and Sons Inc, and later referred to the area as “Lupang Ramos.” The estate, however, was subjected to land reform, which the Ramos family questioned, taking it before the Office of the President and eventually the Court of Appeals.

Following the 2011 Supreme Court decision, Pahilga, one of the leading agrarian law experts in the Philippines, said that they reached out to the Cavite local government for a copy of an ordinance purportedly allowing the estate developer to convert it into a residential area but found none. In 2019, the Office of the City Councilors of Dasmariñas said “there appears no record on file” of the Municipal Ordinance No. 29-A.

Since it now involves questions of facts, Sentro, now representing Kasama-LR, has since asked the Department of Agrarian Reform to re-open the case. However, they were given the runaround as they were merely referred to the 2011 Supreme Court decision.

“We disagree. If the EM Ramos indeed deceived the high court, the decision should be declared null and void, and allow the (agrarian reform) coverage to proceed,” Pahilga said.

The agrarian dispute, too, has made it difficult for farmers to avail of government programs, including water supply for both household and farming needs. Families are left to purchase water by the bucket, which is more costly.

Farmer leader Larry Quillao, vice chairperson of the Kasama-LR, said their fight for their right to land has also made them targets of red-tagging. Warnings of local and international groups of the dangers of red-tagging have never been so real for LR, especially following the infamous Bloody Sunday massacre and the extrajudicial killings of union leaders in the Southern Tagalog region. Most if not all of them, too, were subjected to red-tagging.

“We have been told that a sackful of bullets are being prepared to pepper us. This is the biggest threat against us, especially since we have not received any help from the local government. We only rely on our strength as a community. We will not be cowed,” Quillao said.

Despite the threats, Pahilga said it is important that farmers remain united, especially since they are up against rich and well-oiled machinery. Their community organizing on the ground, he added, did not only allow them to launch training to improve their farming practices but also to look into their rights and how to assert it.

As farmers confront the threats, they find simple joys in their daily routine – preparing the land, tilling, and harvesting their produce. All the problems and stress, Quillao shared, seem to fade away.

After all, at the heart of the struggles of LR farmers, the key element is their organizing work on the ground. These include resolving small misunderstandings among residents that could lead to graver conflict and affect their work or even gentle reminders to avoid holding drinking sprees in the neighborhood. Unity, after all, is their greatest weapon. “As leaders, we lead by example. This is how we carry on with our collective cultivation of this land,” Quillao said.

For Tatay Berting, the pot of boiling coffee that is almost always available at their camp-out is among the many reasons he has kept his resolve to continue advocacy for the land they have been tilling, even if his children have been asking him to retire. “All you need to bring is a cup, and you can already enjoy your coffee. Our colleagues in the LR would always take care of you. I have always felt welcomed. Whenever there are tasks and we have to meet to discuss it, I always attend no matter what.”

Most importantly, Tatay Berting said he is dedicated to molding and re-molding the younger generations of LR, reprimanding them for wrongdoings like any parent would do. “Kasama-LR is an organization that cares. We look after our colleagues and save them from dangers. If one is drowning, we throw in the rope and pull that person to safety.” (Additional research by Rein Tarinay) (DAA, BC, RVO)

This report was published through the support of the Asian Center for Journalism and Internews.