MANILA — In his five years of selling pandesal in a Caloocan market, Junry Anrin experienced the highs and lows of having a business. But the last year and a half has been even more difficult, with their sales reduced from P3,000 (US$59.27) to as low as P1,500 ($29.64), and this is not yet his take home pay.

“The income is not the same since the pandemic; there are days when we make even, but most of the time we are empty-handed,” Anrin, 22, told Bulatlat in an interview.

Cooking oil, for instance, has increased by P500 ($9.92 USD) per gallon while flour increased by P100 ($1.98) per sack. Still, despite the hikes in the prices of ingredients, they cannot afford to adjust their prices as their regular customers would not be able to afford it.

Anril is not alone.

In the past two months, Filipinos are feeling the weight of the incessant price increases. Mainstream economists have attributed it to the oil price hikes and even recent calamities that have destroyed agricultural lands and produce.

The World Bank has attributed the price hikes of staple commodities to the increasing prices of natural gas, coal, and crude oil this year, with the latter hitting a 70-percent hike. These increases, the multilateral body said, “pose an upside risk to price forecasts.”

Read: Beyond fuel taxes, regulate and nationalize the oil industry

However, the Philippine government initially said this will have no immediate impact on grocery items, and even on power rates.

As it stands, the September inflation rate is at 4.8 percent, which is above the government’s target of two to four percent.

“It’s hard since the price of goods is expensive, so we just budget my daily earnings. We eat what is cheap,” said Anril. 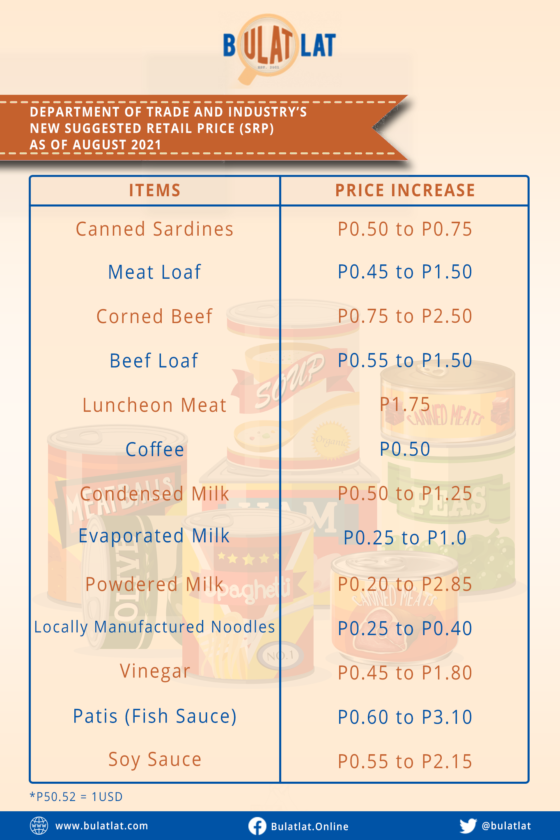 These incessant price increases, according to the Ibon Foundation, make access to food even more difficult. According to a Department of Science and Technology report, 62.1 percent of Filipino families experience moderate to severe food insecurity.

“As a seller, I need to adjust to these changes. I need to budget my finances,” said Anril.

Vegetable vendors are also in need

Meanwhile, local vegetable vendor Nida Alkuino, 48, said their products are not spared from the increasing prices of staple goods.

“It’s particularly hard since my income is low while the cost of living now is very high,” Alkuino lamented.

Alkuino’s vegetable stall is located in the same market where Anrin sells his pandesal. Like Anrin, Alkuino is torn between increasing the prices of her produce or keeping it at a low price in light of the growing competition of vegetable sellers in the area.

Citing data from the Department of Agriculture (DA), consumer watchdog Bantay Presyo showed prices have increased, including that of lowland and highland vegetables. 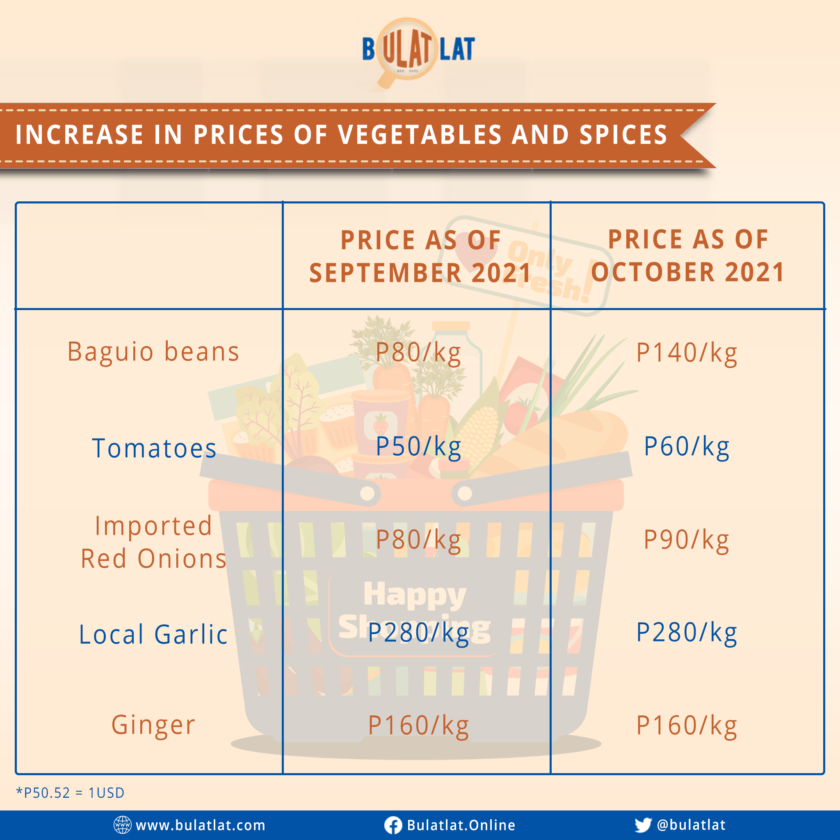 Due to the increased prices, their customers usually do not buy vegetables anymore, and go for canned goods instead. As such, her sales have been reduced by half, from an average of P10,000 monthly sales ($197.58/month) to P5,000 ($98).

With only nearly a hundred dollars to spare in a month, it has become puzzling how her family of five is able to sustain their daily needs, with two of her children still studying.

The oil price hikes, too, she said, also increased the cost of transporting vegetables from the provinces to Metro Manila.

“We are sometimes forced to throw away spoiled vegetables. It is not enough to meet our capital,” said Alkuino.

Instead of getting help from the government, another vendor Cora Bainoza, 59, said the charcoal she is selling is being confiscated by authorities as they were told that it is illegal to sell along the sidewalks of Caloocan.

According to Bainoza, her income remained the same since she raised the price of her products from P20 (0.40 USD) to P30 (0.59 USD), following the increase in her capital. However, prices of food and other expenses such as her medicines have also increased.

“Sometimes, they would send a wrecker and we are forced to close because they will either arrest the vendors or confiscate our goods,” Bainoza said.

For the vendors, the pandemic has only exacerbated their long-running problems. As such, they hope that their issues will be taken up as an electoral agenda in the upcoming presidential elections.

“They must fix the country; give opportunities to the jobless,” Anrin said.

They also challenged those running for public office to come up with good policies, instead of just resorting to the confiscation of their goods.

“I hope that the cost of the staple will be more affordable. They should perform their duty well and serve the Filipinos, give more jobs, stop corruption, and put everything back to normal so we can live at peace again,” Alkuino said. (JJE, RVO)