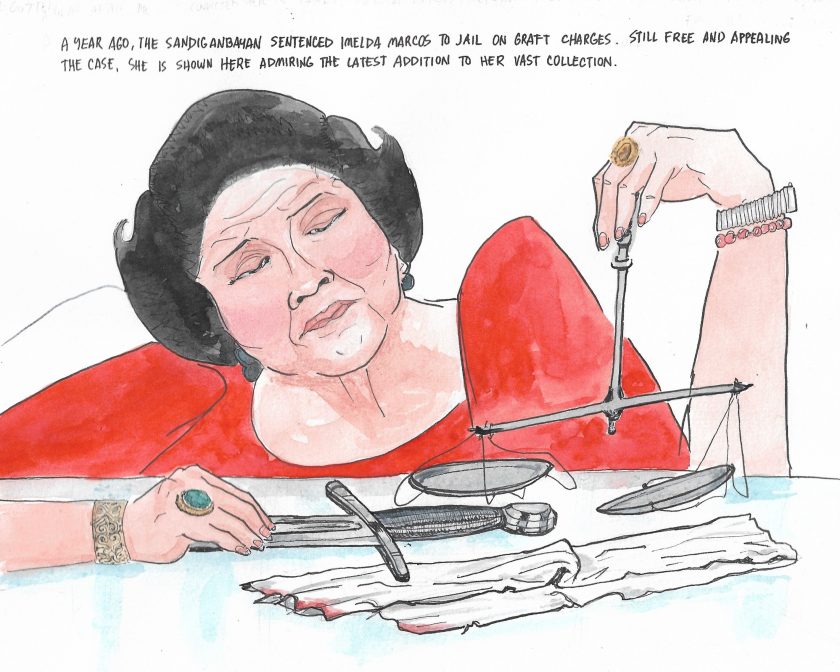 MANILA – It has been three years since former First Lady Imelda Marcos was convicted of seven counts of graft and corruption. For each case, the wife of dictator Ferdinand Marcos was sentenced to imprisonment for a minimum of six years and one month to 11 years, or a total of 42 years and seven months to 77 years.

Despite the court’s issuance of a warrant of arrest, the Philippine government has not yet put her behind bars, with ranking officials justifying their decision not to act on the court’s order because of her age, health, and gender.

Ironically, there are political prisoners who, just like the dictator’s wife, are sick and elderly. Aside from denouncing the trumped-up cases filed against them, there had been repeated calls to release them on humanitarian grounds.

Today, Bulatlat revisits the cases of these political prisoners whose appeals for freedom have been ignored.

1. Eduardo Sarmiento, 71, a peace consultant of the National Democratic Front of the Philippines’ Negotiating Panel was jailed twice under the Marcos dictatorship as a youth activist of the Kabataang Makabayan in the 1970s.

2. Moreta Alegre, 73, was arrested in 2005 with her husband Jesus and their son Selman for refusing to sell their land they tilled to a capitalist who wanted to build a resort. In 2007, they were falsely convicted and sentenced to life imprisonment. Moreta is detained at the Correctional Institute for Women while her husband and son were detained at the New Bilibid Prison. Her husband Jesus died last June 13 because of a lingering illness while their son remains in detention.

3. Peace consultant Leopoldo Caloza, 64, was an organizer in a farming community when he was arrested in 1981 during the Marcos dictatorship. During his detention, he was heavily tortured. He was released a year later. However, he was re-arrested in 2006 on 21 trumped-up charges. Twenty of these charges were dismissed but one of them led to his conviction in 2015.

He has hypertension, diabetes mellitus and urolithiasis.

4. Farmer Oscar Belleza, 64, is among those charged of multiple murder raps before a Manila court in relation to the infamous Hilongos mass grave. He was arrested in 2008 and has recently asked the Manila court to dismiss the cases against him and two other farmers as the pieces of evidence against them were insufficient and fabricated.

Belleza has hypertension. In 2013, he had a stroke because of hematoma and subsequently underwent craniotomy.

5. Dionisio Almonte, 61, was arrested on January 9, 2014 in Ugong, Valenzuela by PNP Intelligence Group-Region 4A and PNP NCR. He was arrested while attending a physical therapy session. He was charged with rebellion, frustrated murder and kidnapping with murder. He was transferred to Camp Bagong Diwa in 2016. Prior to his arrest, he served as a peasant organizer in Pagsanjan, Laguna under the Pagkakaisa at Ugnayan ng mga Magbubukid sa Laguna (PUMALAG).

Almonte suffers from several ailments. He has been battling diabetes for two decades, has had frequent leg sprains, degrading eyesight and constant weight loss. He was also diagnosed with lumbar spondylosis, a painful condition of the spine resulting from the degeneration of the intervertebral discs.

6. Gerardo Dela Peña, 80, is the oldest political prisoner in the Philippines. He was arrested in 2013 and convicted of trumped-up charge of murder. He is a poet, farmer and human rights defender.

On March 11, 2020, he reportedly spit out blood while detained in the New Bilibid Prison. At a very old age, Dela Peña’s eyes are already blurring and his hearing is also deteriorating.

7. Norberto Murillo, 68, was arrested on October 30, 2008 and was paraded by state forces as a high-ranking officer of the New People’s Army (NPA). He faces trumped-up charges of 15 counts of murder. He was arrested by members of the Intelligence Service of the Armed Forces of the Philippines (ISAFP) and the local police at Camarin, Caloocan City. Prior to his arrest, he was a human rights defender and a member of the Alyasansa’t Lakas ng Mamamayang Demokratikong Pilipinas and Kusog san mga Biktima 1081.

His daughter, supported by human rights groups, pleaded for his immediate release during the COVID-19 pandemic, citing his old age and increased vulnerability to the virus while in prison.

8. Peace consultant Ferdinand Castillo, 62, was arrested in 2017 and was charged with illegal possession of firearms, among others. His arrest was shortly after President Duterte cancelled the peace talks with the National Democratic Front of the Philippines.

9. Lilia Bucatcat, 70, was a peasant organizer in Samar. She was arrested by a joint police and military team on March 9, 2017, while she was on her way to walk her dog to the Marikina River Park.

It took one whole day before her friends and family finally located her at Camp Crame.

Bucatcat has a benign cyst in her throat and suffers from sciatica, which is characterized by body pains in the lower back and both legs, and other illnesses of the elderly.

10. In 2017, Rita Espinoza, 67, was arrested along with fellow development worker Benito Quilloy. Both were conducting a series of consultation among sugar workers of Negros Occidental. Espinoza is facing robbery and arson charges in Agusan del Sur, and a murder charge in Sibugay, Zamboanga.

Espinoza has hypertension, anxiety and depression.

11. Adelberto Silva, 74, was among the political prisoners who were freed in 2016 when the peace negotiations resumed under the then newly-installed administration of President Duterte. He was designated vice chairperson of the Reciprocal Working Committee on Social and Economic Reforms of the NDFP Negotiating Panel. In 2018, he was arrested along with four others in Sta. Cruz, Laguna. He remains in detention as of this writing.

12. Vicente Ladlad, 72, was imprisoned and tortured during the martial law years in the 1980s. Under the Duterte administration, he was arrested in a late-night raid on Nov. 7, 2018. This time, he and the Villamor spouses were charged with illegal possession of firearms and explosives.

Ladlad is a long-time peace consultant of the National Democratic Front of the Philippines (NDFP) and is protected under the Joint Agreement on Safety and Immunity Guarantees (JASIG). He is also included in the Anti-Terrorism Council’s terror list that deprived him access to his bank accounts where his compensation as a victim of martial law was deposited.

He has bronchial asthma.

13. Villamor spouses Alberto and Virginia were arrested along with Ladlad in 2018. The elderly couple was also charged with illegal possession of firearms and explosives.

Alberto, 65, is insulin-dependent because of his diabetes mellitus and also suffers from hypertension.

Virginia, 67, on the other hand, has hypertension, severe allergy, arthritis, and had a pelvic fracture.

14. During the Marcos dictatorship, Rey Claro Casambre, then a Physics and Math teacher at the University of the Philippines in Baguio City, was arrested in 1971 over the Plaza Miranda bombing. He was arrested again 20 years later and was charged with illegal possession of firearms and explosives.

He has worked for lasting peace in the Philippines as a consultant in the peace negotiations between the Philippine government and the NDFP through different administrations. However, under the Duterte administration, he was arrested in 2018, following the signing of Executive Order No. 70 that established the National Task Force to End Local Communist Armed Conflict (NTF-ELCAC).

Casambre, 70, is among those whose bank account was frozen by the Anti-Money Laundering Council after the Anti-Terrorism Council included his name in the terror list.

15. Francisco “Frank” Fernandez, 73, was arrested along with his wife Cleofe, at Brgy. Calumpang, Liliw, Laguna on March 24, 2019. He was charged with illegal possession of firearms and explosives, and was accused of being the deputy secretary of education of the Regional Committee of Negros, Cebu, Bohol, and Siquijor of the Communist Party of the Philippines (CPP).

Due to old age, Fernandez has grown frail. When he suffered from a stroke in 2019, he had to be aided to the toilet and administered with IV fluids. He is afflicted with chronic artery disease, chronic stable angina, hypertension stage 2 – uncontrolled, chronic obstructive pulmonary disease (COPD), and hyponatremia.

16. Birondo spouses Alexander, 69, and Nona, 62, were arrested in 2015 but were freed a year later to join the formal peace talks between the Philippine government and the NDFP Negotiating Panel under the then newly-installed Duterte administration as staff.

They were re-arrested in 2019, using a search warrant that stemmed from the “search warrant factory.” A Quezon City court has since quashed the search warrants and declared the evidence against the two peace talks staff inadmissible, citing questionable testimonies of the police’s witness. Both, however, are still in detention as of this writing.

Both are insulin-dependent because of diabetes mellitus. Alexander has cardiovascular disease and bronchial asthma.

17. Antonio Molina, 66, was arrested in 2019 in Puerta Princesa, Palawan, along with several human rights workers in their community. A member of a grassroots farmers group, he was charged with illegal possession of firearms and explosives. Authorities also confiscated his P30,000 ($591) which was intended for his medical needs.

Last month, a Palawan court denied his motion for release on humanitarian grounds even if he is bedridden for stomach cancer.

These 17 cases highlight the injustices of the times. The calls for their release remain amid the continued freedom of a dictator’s wife known for her Imeldific lifestyle. (RTS, DAA)