You Are Here: Home → 2021 → December → 10 → ‘We are indignant’ | Rights activist, lawyer remain resolute to fight for rights amid upholding of Anti-Terror Law

‘We are indignant’ | Rights activist, lawyer remain resolute to fight for rights amid upholding of Anti-Terror Law 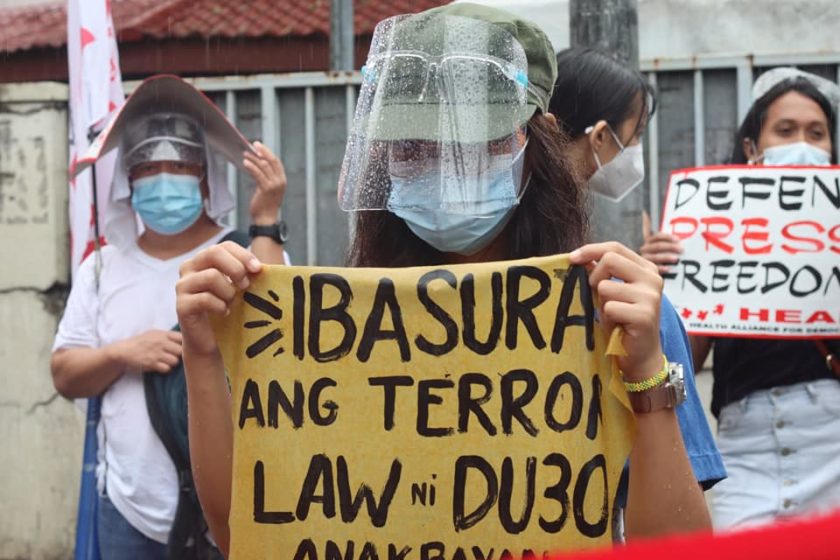 MANILA – For Filipino human rights defender Cristina Palabay, eating threats for breakfast has been so real in the past five years. Though known for her fiery speeches on human rights violations in the country, Palabay said she is just human and that there are moments when she is scared and wary over the attacks against her and her fellow activists in human rights group Karapatan.

Still, Palabay said her fight for human rights continues despite the Supreme Court’s ruling to uphold the controversial Anti-Terror Act of 2020 – except for portions of two provisions on the people’s exercise of their civil and political rights and the designation of terrorists.

“It is easy to say that we should not be afraid. But sometimes it gets the best of us. But we have to remain resolute despite all the things that are happening, including this pandemic and the kind of governance that we have,” said Palabay during Bulatlat’s Twitter Spaces December 9.

[THREAD] Will the striking of portions of two provisions of the anti terror law enough to protect the people from its other draconian measures? Join us now. pic.twitter.com/OUjxkTTNjS

Palabay, one of the petitioners against the anti-terror law, said that the striking down of the portions of the law, particularly the qualifier in Section 4, may be seen as an affirmation of their long-standing calls that activism is not a crime. However, National Union of Peoples’ Lawyers President Edre U. Olalia said the remaining provisions of the law could lead to further rights abuses.

Olalia added that they have not yet received the full decision from the Supreme Court and that they will be filing a motion for reconsideration within the 15-day allowable period.

Meanwhile, Palabay invited the public to attend the protest action today, International Human Rights Day, to show “their strongest condemnation” of the upholding of the anti-terror law.

Yesterday’s Twitter Spaces titled “On the SC Decision to Uphold Terror Law: What we know so far” was moderated by journalism professor and Bulatlat associate editor Danilo Arao.

The space ended with Palabay saying, “What can we do, what can we expect especially in the upcoming elections? We need to organize and strongly fight for our rights.” (JJE, RVO)