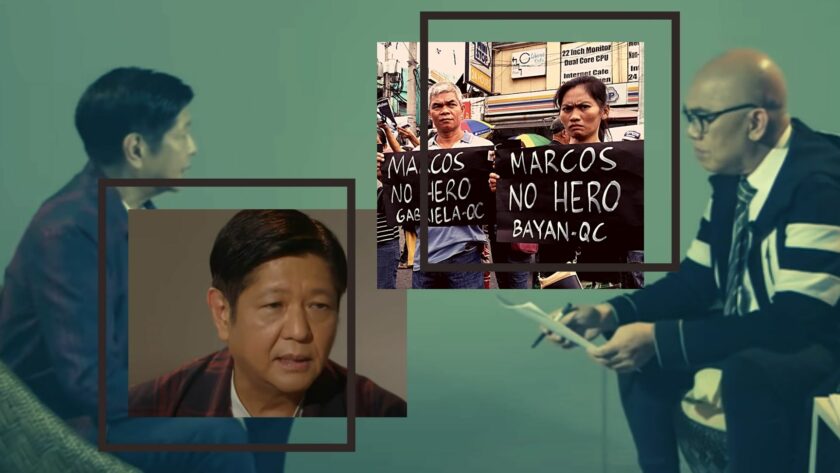 MANILA – Human rights groups assailed what appears to be attempts of Ferdinand Marcos Jr., son and namesake of the late dictator, to discredit the human rights violations committed during the two-decade rule of his family during the martial law.

In a recent interview with television host Boy Abunda, Marcos Jr. said he does not know how the record on human rights violations during martial law was generated. The now presidential aspirant also asked human rights group Amnesty International to “share that information that they have and maybe it will help us make sure the system works.”

In response, Butch Olano, Amnesty International Philippines Section Director, said that they will “formally furnish Mr. Marcos copies of the reports published in the 70s and 80s,” adding, “We urge him to acknowledge the atrocities committed under martial law as written in our reports, condemn the actions of his father’s regime, show remorse and publicly apologize to the victims, their families and the entire nation.”

Read: My channel, my rules? The dictator’s son’s attempts at whitewashing the horrors of martial law

Read: How Duterte enabled the return of the Marcoses

Amnesty International reported that at least 3,240 were killed, 34,000 tortured, and 70 imprisoned during the martial law.

“Ferdinand Marcos Jr. has no regard whatsoever for the victims of martial law. His interview shows how much he undermines the people who experienced human rights violations during his father’s dictatorship,” Olano said.

Meanwhile, a group of martial law survivors and advocates against the return of tyranny Campaign Against the Return of the Marcoses and Martial Law (CARMMA) said that the Marcos martial law “spawned a culture of fear, tyranny, impunity and injustice to control the nation, while his family and cronies plundered more than $10 billion from the nation’s coffers.”

CARMMA members were among those who filed the class suit against Marcos in 1986, and they won in 1995. In that 1995 ruling, the Hawaii courtruled that the victim-plaintiffs were entitled to $2-billion compensation to be taken from the Marcos ill-gotten wealth that may be recovered. This ruling was subsequently upheld by the US Supreme Court and recognized by the Swiss and Philippine supreme courts.

“We will never tire in reiterating that the hands of the Marcoses are bloodied and dirty,” CARMMA said. (RTS, JJE, RVO)