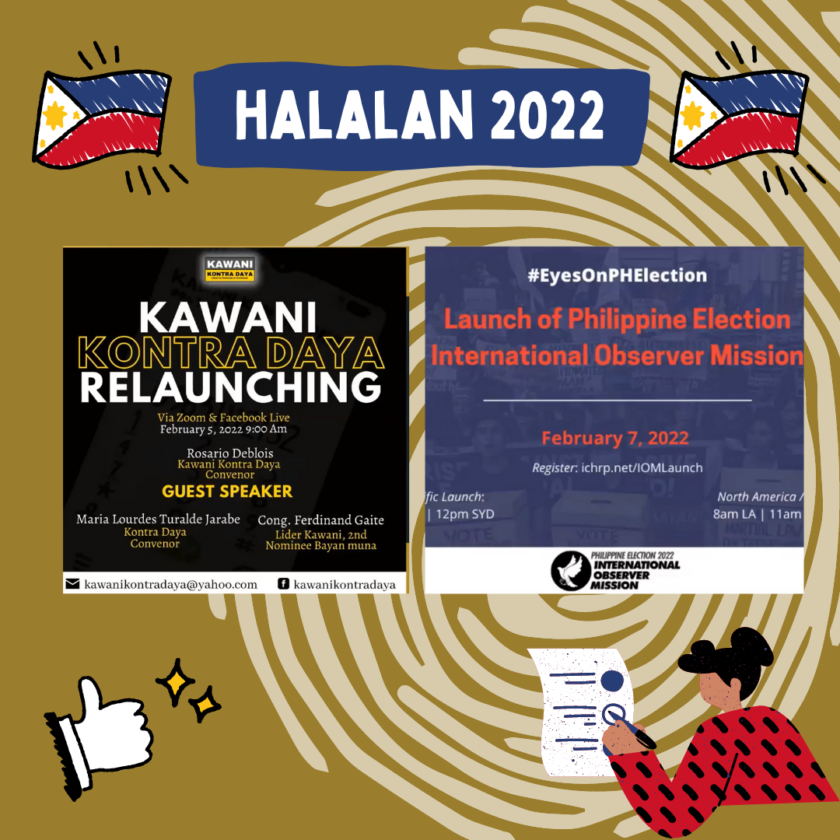 MANILA – Various groups have launched programs against election fraud and violence as the national elections here in the Philippines draw near.

“It is our duty as citizens to use our voice to be heard and join the movement towards change and that we must continue to do so even in the face of pandemic or any crisis.” Bayan Muna Rep. Ferdinand Gaite, former head of Courage, a government workers union, said.

KKD also contributes to dialogues and consultations in policy directions for the country, people’s rights and welfare, and provides voters education.

The International Coalition for Human Rights in the Philippines (ICHRP), on the other hand, also launched its Philippine Election International Observer Mission yesterday, Feb. 7. This aims to provide independent monitoring of Philippine elections from the start of the campaign period and elections up to the confirmation of elected candidates.

ICHRP, a global network of organizations, is concerned about the human rights situation in the Philippines.

“The election context itself is deeply troubling. As noted last year in the reports of INVESTIGATE PH findings, “ said by IOM Commissioner Rev. Michael Yoshii, adding that state policies have emboldened attacks against activists, peasant leaders, and the indigenous peoples.

The IOM will consist of foreign observers who will visit all 12 regions in the Philippines. They hope to gather evidence and document issues during the election period, and subsequently submit it to the Office of the High Commissioner for Human Rights of the United Nations, and the International Criminal Court.

This, convenors of ICHRP noted, is needed as the human rights situation under the Duterte government continues to worsen.

“Many previous elections have been very violent and many people have died. Killings in the past elections and the mass murders throughout the years of the Duterte regime are a stark reminder of the violence that could break out during the 2022 PH Elections,” Lee Rhiannon, a member of Commissions of Inquiry to Human Rights Abuses in the Philippines in 2019, said.

Last 2016, the reported number of victims of violence during the election period was 192. The Philippine National Police reported that among 43 election-related violence, 20 people were killed since the 2019 election period began on January 13 that year.

“We took those concerns on board and we have formed the International Observer Mission. A recommendation of our third report raised all the important issues of ensuring the safety of election officers, voters, and the general public,” Rhiannon added.

Meanwhile, Rev. Yoshii said that in some sense, IOM is an extension of the independent investigation of human rights they did last year.

“As elections take place, they are impacted by all of these fears, especially the war on dissent,” he said.

Last January 2021, Human Rights Watch made a report of how ‘drug war’ killings rise during the pandemic. As of that date, more than 160 political activists had been killed since the Duterte regime started.

The International Criminal Court (ICC)’s investigation also shows that from July 2016 to March 2019, some 12,000-30,000 drug-related killings were reported. Meanwhile, 60 lawyers have been killed under the same administration.

“This is the importance of our work in the international community, as we all fight for our common goals for genuine democracy,” said Danilo Arao, a journalism professor at the University of the Philippines and co-convenor of Kontra Daya, also an election watchdog.

As the 90-day campaign period starts today, the health protocols and safety against the COVID-19 infection must be the primary concern.

Arao added, “rest assured that advocates from the international community coming here, we will help each other out so that our work will not be obstructed.” (JJE, RVO)