What kin of ‘tokhang’ victims expect from the next PH president 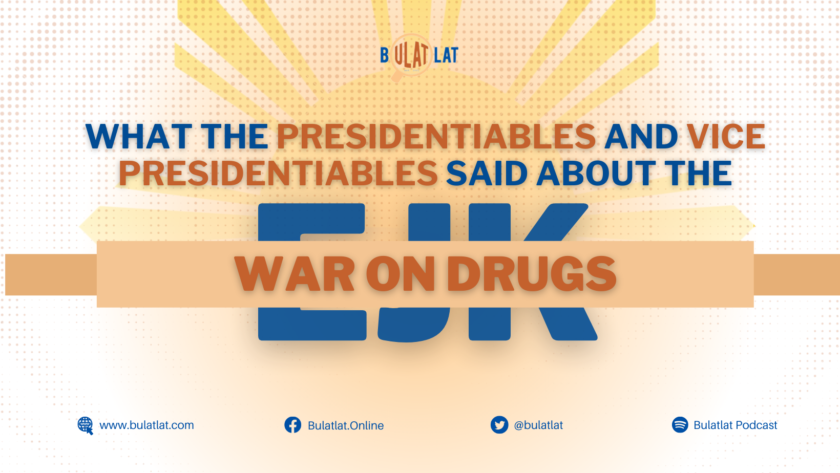 MANILA – Jane Lee has already lost count how many times she talked about her husband who was killed in the Philippine government’s war against illegal drugs. While it has been nearly five years, she still thinks of what-could-have-been scenarios, often asking herself if there was anything in her power that could have changed her husband Michael’s fate that evening of March 20, 2017.

“Go ahead. I will just wait for the jeepney,” she remembered her husband telling her as they walked along Langit Road (literally Heaven) leading to their home in Bagong Silang, Caloocan.

Lee told Michael, a jeepney driver, and musician, to go home as soon as possible. He responded saying it would take him an hour at most to check the jeepney which he would use the following day.

But then 34-year-old Michael did not go home that evening. Instead, Lee received the worst news of her life – a piece of news that seems to haunt her still whenever she walks along Langit Road.

According to human rights groups, President Rodrigo Duterte’s drug war, or ‘tokhang’ as called here, has killed more than 30,000. The ‘tokhang’ killings prompted relatives and advocates to file complaints against Duterte before the International Criminal Court (ICC).

“As a victim, I had to endure the six years of this Duterte administration. Now that there is an opportunity to change it, the families of the victims of his drug war are looking for a leader who is for human rights. We do not want a repeat of this drug war that only targeted us poor,” Lee, 39, told Bulatlat in a phone interview.

With only weeks leading to the elections, Lee said they are looking into the track records of those running for public office.

“We want to make sure that there is consistency in their track record and what they saying. They can just claim now that they are for human rights and that they are supporting the fight of the victims but what has been their stand for the longest time?” Lee asked.

As of now, all of the presidential candidates and their respective running mates have agreed that the campaign against illegal drugs must continue. However, unlike how President Rodrigo Duterte implemented it, rights advocates have been insisting that the campaign must be science-based, and should not lead to human rights violations. 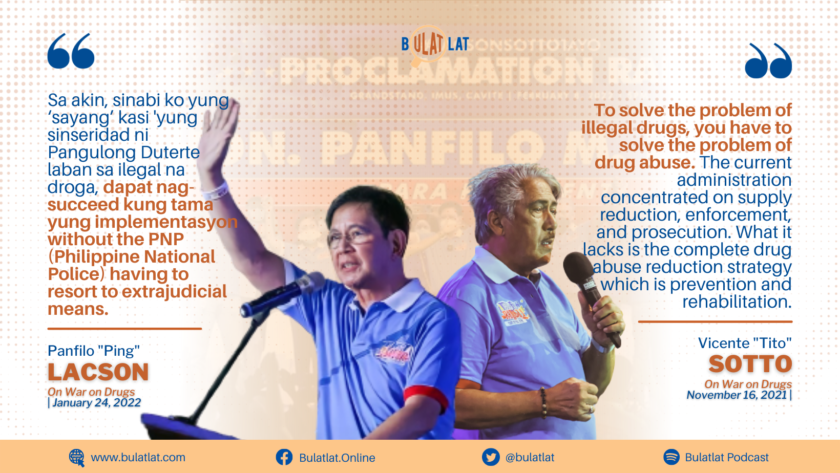 Sen. Panfilo Lacson headed the Senate’s hearings on “tokhang for ransom” incidents. In January 2017, he suspended the hearing, saying that it would be wise for the Senate wait and see the major changes that the Philippine police will be implementing.

Lacson’s human rights record, however, is not pristine. As part of the Metrocom during the Marcos dictatorship, Lacson has been accused of torturing and abducting activists.

Lacson is also the main author of Anti-Terrorism Act, a law which is criticized for provisions that violate civil and political rights. 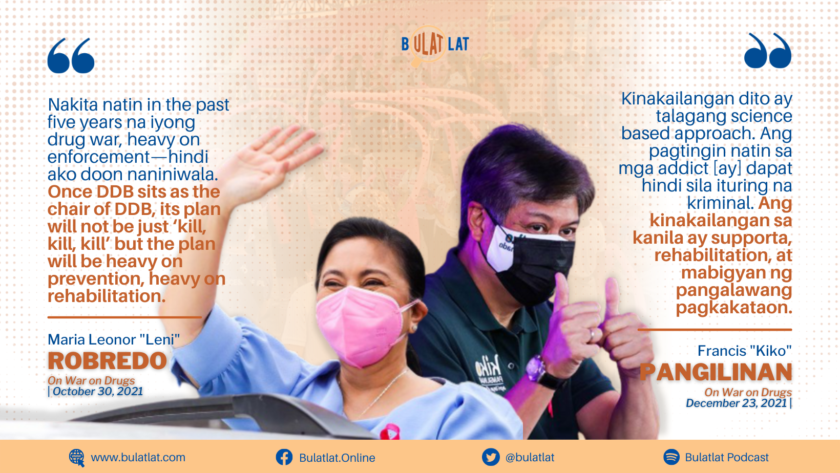 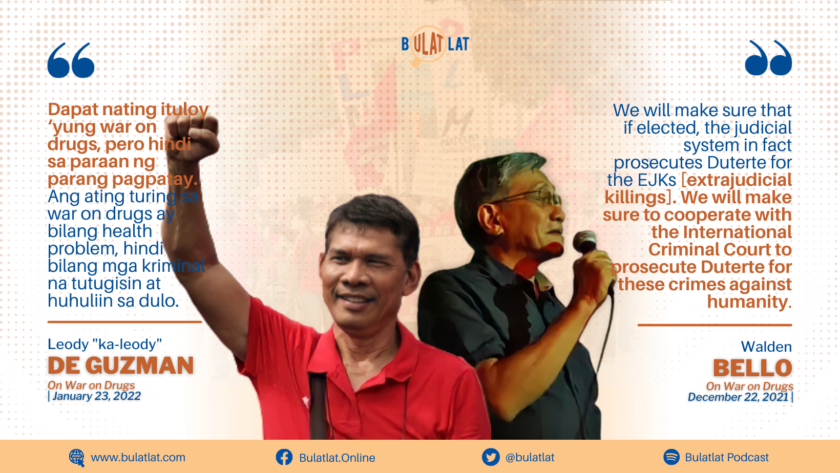 Both Vice President Leni Robredo and labor leader Leody de Guzman believe that the fight against illegal drugs should have a different approach. Robredo vowed to focus more on prevention and rehabilitation while De Guzman said that drug addiction should be seen as a health problem. 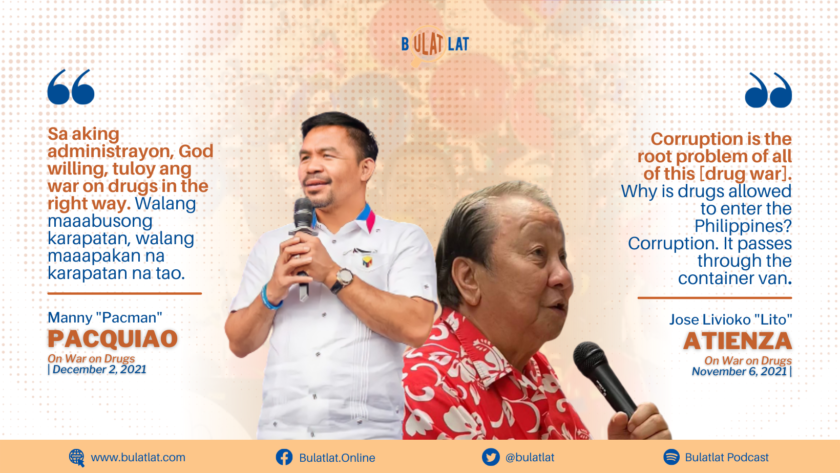 In 2017, Pacquaio expressed support to President Duterte’s drug war. He once said, “if there is an operation and you are still doing it, you are disobeying the command of the land and the command of God.” 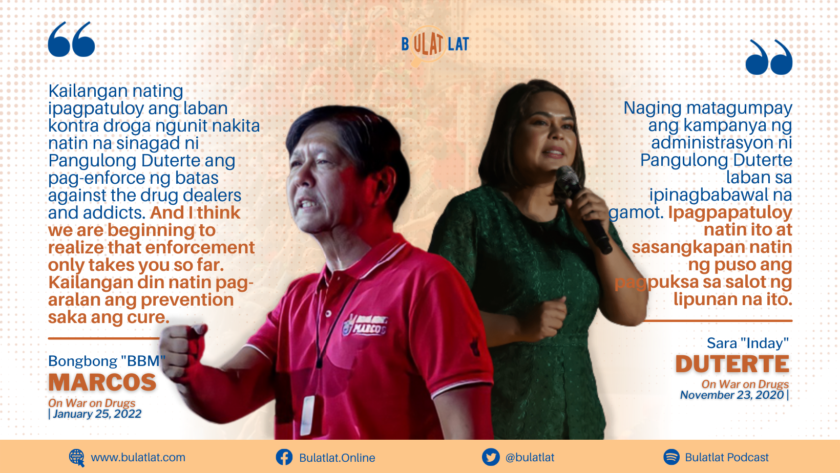 Lee said that to stop illegal drugs, the government should find and cut it from the source. This, she said, instead of looking only at street-level selling, which only resulted in the extrajudicial killing of thousands of poor Filipinos.

Presidentiables must support ICC investigation too

Lee said that they are also looking into the stand of those running for public office on the pending case before the International Criminal Court against President Duterte over his drug war.

“As of now, the perpetrator behind these killings hold the seat of power. We lost our trust (that we can attain justice here). But with the ICC at hand, it gave us the strength. It felt that, finally, justice will be served,” she said.

Meanwhile, Ferdinand Marcos Jr., son and namesake of the late dictator, said he does not see the need for the ICC to “do the job for our judicial system,” adding that it is “perfectly capable of doing that.”

Marcos’s running mate for the 2022 elections is Davao City Mayor Sara Duterte, daughter of the president.

Mayor Francisco “Isko Moreno” Domagoso, on the other hand, said he would prefer local courts to hold President Duterte to account.

“The leader that will be elected in May should continue to seek justice both here in the country and in the ICC. The latter most especially so that the whole world will know what has happened here in the past six years,” said Lee, who is among the families of victims of President Duterte’s drug war who filed a complaint before the international court.

Lee knows that with the perpetrators of her husband’s killing unidentified, police investigation will most likely not happen. This unlike other drug-related killings with perpetrators identified or hold evidence like a CCTV footage.

The only domestic remedy available for Lee was the investigation by Commission on Human Rights. The rights body’s resolution stated that their village, through its anti-drug body, has issued a certificate that her husband was never involved in the drug issue.

Apart from the ICC, Lee said it’s also important for the country’s next leaders to have concrete plans and programs for the victims of President Duterte’s drug war. Their plight and search for justice, she added, must be acknowledged at the very least.

Why kin of tokhang victims continue to persist

Lee said she still remembers how she and her husband Michael would watch news, and pitied those who had fallen victims to President Duterte’s war against illegal drugs. Prior to the killing of Michael, there has been a series of shooting among their neighbors – all allegedly linked to Oplan Tokhang.

Never did they imagine, she said, that her husband would also fall victim to the drug war.

Still, she said that she finds time to join activities being organized by Rise Up, an organization of families of victims of President Duterte’s drug war.

Lee said she draws strength from fellow relatives of the victims of the drug war, and from her three children now aged 18, 16, 12, whom she has raised on her own by selling food and other items she can find from Divisoria.

Such strength she needs to muster almost every day as she passes through the very same road where her husband and many of her neighbors were killed in the name of President Duterte’s drug war. This also serves as her daily reminder to fight for justice so that no one would have to trod the same road as her. (With reports from Emily Vital) (RVO)