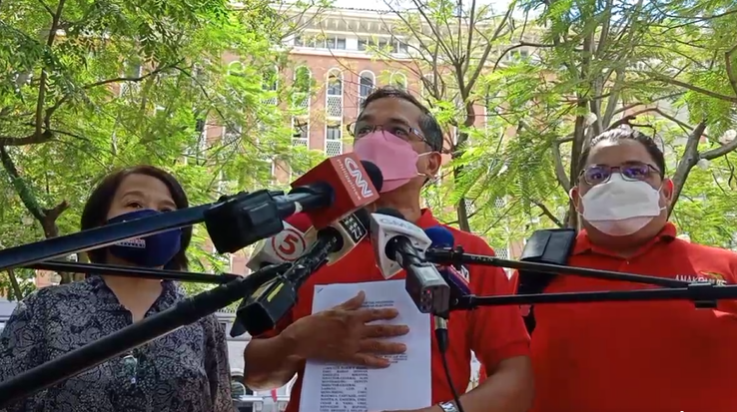 MANILA – The Makabayan bloc filed a complaint before the Commission on Elections against the National Task Force to End Communist Armed Conflict (NTF-ELCAC) on Friday, March 25.

Speaking to the media, Bayan Muna First Nominee Teddy Casiño said that the red-tagging by NTF-ELCAC Spokesperson Lorraine Badoy and other officials against the Makabayan bloc and Vice President Leni Robredo is a criminal act.

Casiño cited violations in the Omnibus Election Code particularly 261(e) which prohibits public officers and employees from engaging in partisan politics or electioneering; 261 (i) or the use of threat and intimidation and deception using fake news to keep people from participating in elections or campaigning.

Casiño also said that Badoy and the other NTF-ELCAC officials also violated Article 261(o) of the Omnibus Election Code, prohibiting the use of public funds, which they claimed that the agency used to spread fake news about the candidates.

“We are filing this complaint to put a stop to this red-tagging. It has been four years that Secretary Badoy is spreading lies and false accusations against us. We have been saying that if what they’re saying is true then file a case, go through the right process. But they are not filing a case or if there is, it was all dismissed,” said Casiño, adding that this proves that what the NTF-ELCAC claims are all lies.

But this election, he said, they have to draw the line because this is clear electioneering.

On March 14, Badoy accused Robredo of having an alliance with the Communist Party of the Philippines to disrupt the May 9 national elections. Badoy repeated the same statement on March 21.

In their complaint, Makabayan said that the NTF-ELCAC through Badoy, “deliberately, willfully, and willingly issued and released the statement—which is in the nature of a fake news—not only to campaign against the various candidates mentioned, but to intimidate the general public for them to refrain or desist from participating in campaign rallies of the said targeted candidates or from casting of votes in favor of said candidates.”

Badoy and the NTF-ELCAC cannot also excuse this statement as “personal opinion” and protected speech, Makabayan said, because the statement was signed and released as an official statement of the office. It was also disseminated through the official channels of the NTF-ELCAC.

The group said that such an excuse is “self-serving and patently false since they released the statement into the world” as a statement of the NTF-ELCAC signed by Badoy.

Meanwhile, former Anakpawis Rep. Ariel Casilao said that it is not true that there is nothing wrong with red-tagging. He said this act has cost the lives of their members and leaders especially in the provinces.

“We are fighting back. Let this serve as a warning against all other NTF-ELCAC (officials) and other government agencies. You will be held accountable,” he said.

Badoy as well as other government officials engaged in red-tagging claims that there is no such thing as red-tagging and it does not endanger one’s life even invoking a Supreme Court resolution in 2015.

But Edre Olalia, president of the National Union of Peoples’ Lawyers (NUPL) explained that what the SC actually said, “is that mere membership (in that case progressive party-lists and/or national and religious organizations tagged by the military and the police as communist front organizations) – and by that fact of such membership alone – cannot equate to an actual threat that would warrant the issuance or entitle one to a writ of amparo.”

“It did not say that red-tagging (or red-baiting) is not dangerous, much less that it does not exist. (In fact, the Dissenting Opinion amplified these dangers). No other implication, interference or extension of such a clear and categorical statement by the SC, especially if not within context – could be reasonably concluded or sustained,” Olalia said.

The said SC resolution was in response to the petition for writs of amparo and habeas data filed by progressive groups under the administration of President Benigno Aquino when red-tagging, also called as red baiting, was also rampant.

Meanwhile, ACT Teachers Partylist Rep. France Castro said that this is only the first step in their push back against red-taggers as they plan to also file charges against uniformed personnel who are also engaged in red-tagging.

Castro maintained, “Red-tagging endangers the lives of the members of the Makabayan bloc, our members and coordinators.” (RTS, RVO)