What Filipino nurses want from next PH president 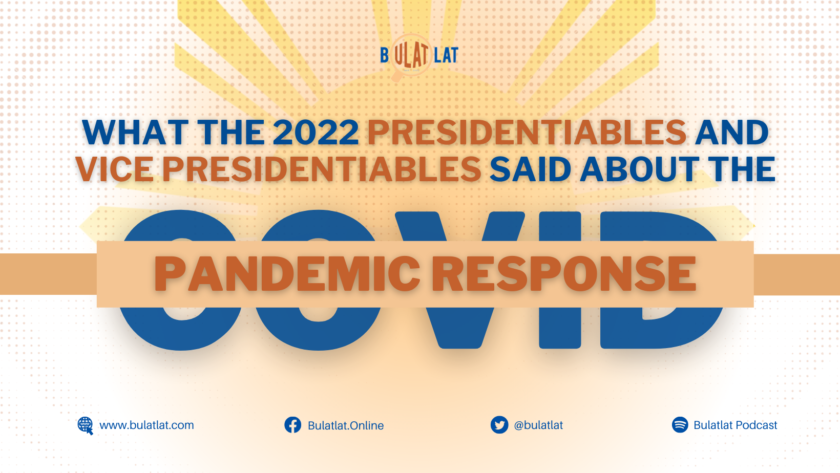 MANILA – The last time Bulatlat talked to Pauline Budy, a Filipino nurse at the country’s top infectious hospital, she was limping in pain as she made rounds in the emergency room. This time, when Bulatlat interviewed her again, the atmosphere was more relaxed as the number of cases in the Philippine capital and nearby provinces remained low in the past weeks.

She exchanged banters with her colleagues in the COVID-19 triage outside the hospital, as they casually counted the number of times they have contracted the deadly virus. This is not to trivialize what they and thousands of others have been through but to laugh off the sick joke they have been in for the past two years, which they call the government’s pandemic response.

For Budy, however, these “chill” moments last only for a few moments. The possible surge of COVID-19 cases, after all, is in the offing – hanging over their heads.

“This pandemic has put a spotlight on the role of nurses and health workers. Finally, policymakers saw our value. Yet, it did not fully translate to actions,” Budy told Bulatlat in Filipino.

There have been 3.69 million COVID-19 cases in the Philippines since the pandemic reached the country’s shores. Of late, the number of cases has not gone beyond 300 cases per day. But Budy said they are not putting their guards down, especially with the health department warning of a possible surge. And so should the next Philippine president and many others running for public office.

“It pains me to see (tarpaulins) of politicians and partylists claiming to represent our voices, even using images of nurses to boost their campaign. But the truth is, most of them were nowhere to be found when we were fighting for our rights and welfare,” she said.

Looking into the public statements of presidential candidates, all of them promised better responses to the pandemic. 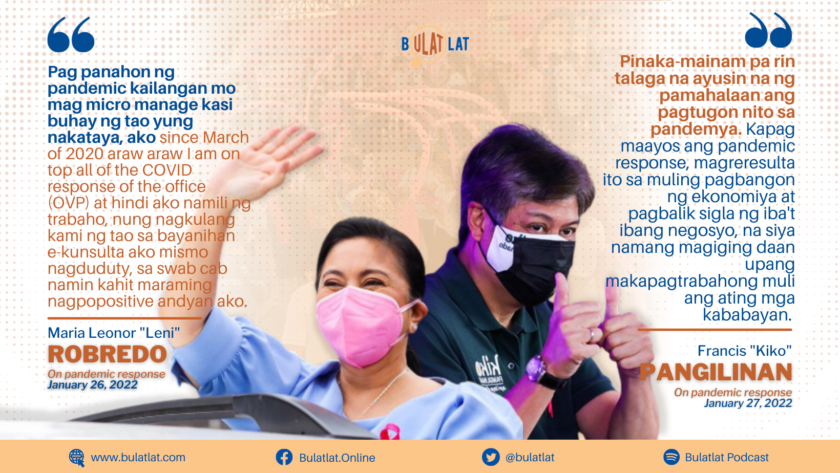 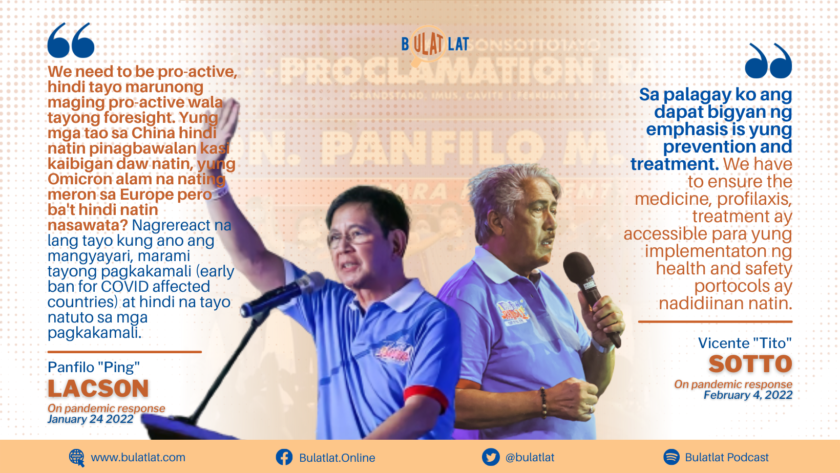 Vice President Leni Robredo said she will be on top of government response and ensure that there is harmony. She also highlighted the need to learn how other countries are faring and documented good practices. Through the Office of the Vice President, she led projects that provided mobile clinics and other free services such as transportation for health workers, and testing, to name a few. This while she continued to be critical of how President Duterte is leading the government’s pandemic response.

Like the vice president, Senator Panfilo ‘Ping’ Lacson was also critical of the government’s pandemic response, categorically saying that it has failed as seen in the obvious results. He has also pushed for senate investigations on the pandemic response, including what appeared to be irregular government transactions.

He said he wants to be proactive in the response, citing the many mistakes in the past and the need to learn lessons from this. 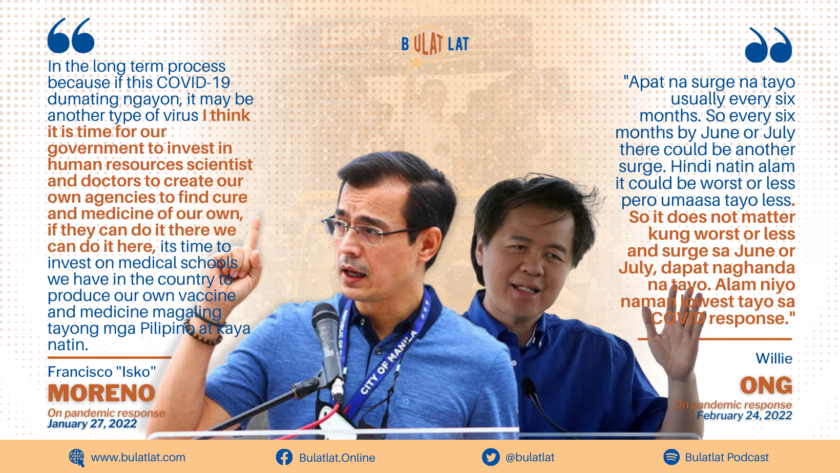 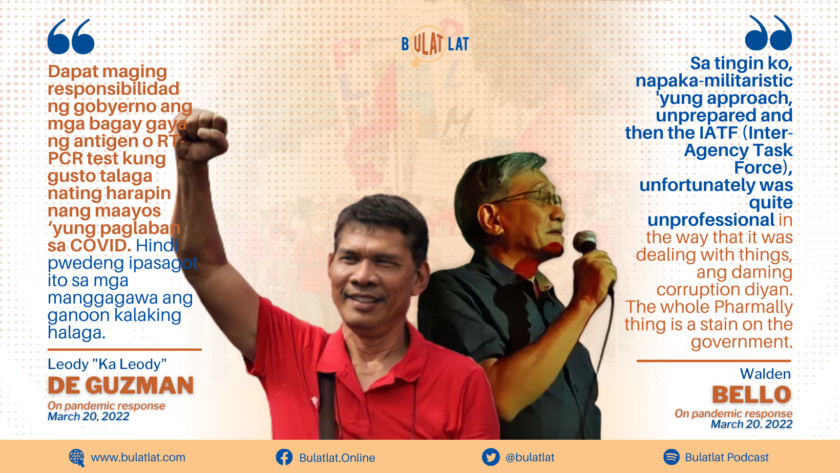 Manila Mayor Isko Moreno prides himself on his supposed efficient COVID-19 response in the City of Manila, including the procurement of medicines and isolation facilities. This, he said, should serve as a doable and duplicable prototype of how the pandemic may be addressed.

Labor unionist Leody De Guzman highlighted the need for mass testing, which should be given to workers for free. He also pushed for facilities for isolation and mass vaccination. 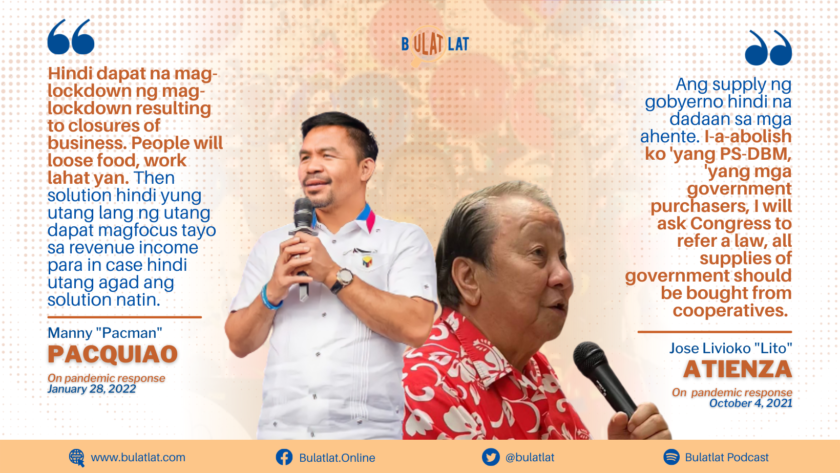 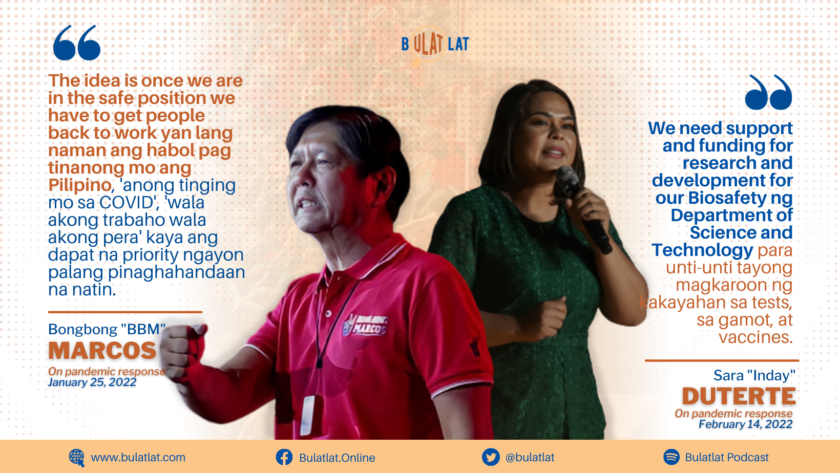 Sen. Manny Pacquiao, on the other hand, emphasized the need for long-term and concrete plans to address the pandemic. He also focused on the need to develop economic infrastructure so that the government will not continue to resort to lockdowns whenever there is a surge in the number of cases.

Former senator and son and namesake of the late dictator Ferdinand Marcos said he would ensure that workers will be able to return to their workplaces by increasing the number of vaccinated individuals, which he dubbed as “Jab to Jobs.”

Budy said that many of their fellow health workers have yet to receive their due benefits. This even after a series of senate investigations and public pronouncements by the health department that it would be looked into.

She observed that there seems to be no system in place on how their benefits will be distributed. It was almost as if the government did not want to give what was due to them or that they are trying to find loopholes along the way.

It does not help, too, that their already meager benefits are further slashed with government taxes. As a result, Budy said health workers are often buried in loans and debts.

As part of its electoral agenda, the Filipino Nurses United said the salary of nurses both for private and public health institutions should receive at least P50,000 (US$955.45) monthly. Their safety and welfare should also be looked into by filling up vacant plantilla positions to ease under-staffing and provide a safe nurse-to-patient ratio, ending contractualization among their ranks, ensure full implementation of the Magna Carta of Public Health Workers, and the enactment of a Magna Carta for private health workers, to name a few.

They are also engaging those running for public office to strengthen the public health system, especially primary health care units in the communities, provision of free and quality medicines, and the allotment of at least five percent of the country’s gross domestic product for health.

As of now, Budy and some of her colleagues have pending applications abroad. Between now and then, she jested that she will be practicing how to say “water” in a British accent. She then smiled weakly, saying it was a decision that she did not want to make.

She hopes that the next president would be able to take good care of nurses and appreciate them – not just by hailing them but also to make sure that these are translated into actions. (RVO)