You Are Here: Home → 2022 → May → 5 → Lucia Francisco, a hardworking woman community organizer 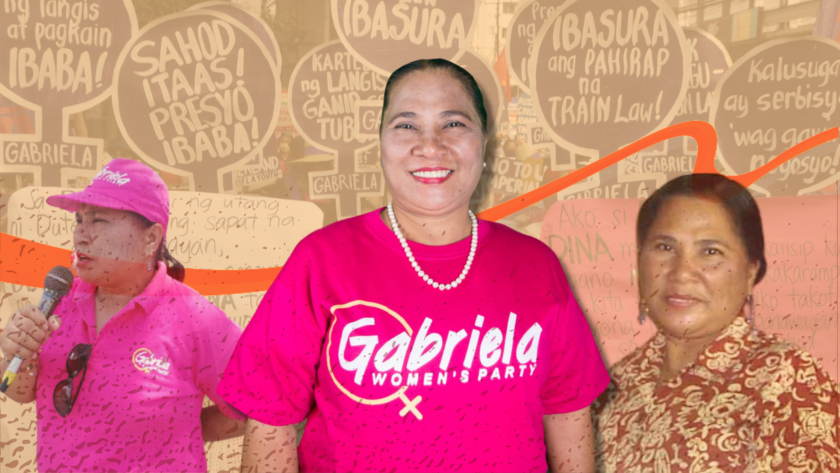 Lucia Francisco is no stranger to hard work and perseverance. This she hopes to bring to the halls of the House of Representatives.

MANILA – Hard work and perseverance are nothing new to Lucia Francisco.

The long-time community organizer, 64, once dreamt of becoming a doctor. But poverty kept her from pursuing her dreams as she juggled work while taking up a two-year associate medical secretarial course. She thought that this is the closest she can ever be to achieving her dreams only to find out later that she was up to a bigger challenge of looking into the country’s social ills.

Francisco, known to her colleagues as Tita Lucy, is now the third nominee of Gabriela Women’s Party.

“We need good governance that will uplift the conditions and lives of the people, honest, and sincere so that women, children, and the masses will face a better future. We should not let others distort our history and let the dictatorship happen once again,” she said.

Growing up, she looked after her five siblings, including helping them with their school assignments and household chores. This, as both her parents worked to provide for their needs. Her father worked as an electrician, inspector, and collector for the Panay Electric Company while her mother worked at a nearby small town lottery while selling frozen meat goods to make ends meet.

Francisco was also a working student at Iloilo Doctors College, where she earned a dollar for an eight-hour shift. To augment her meager salary, she accepts typing jobs on her break. After completing her two-year associate course, she took a history degree but shifted to accounting at the University of Ilolilo, where she graduated in 1981.

She then worked for the non-government agency Foster Parents Plan International as its program secretary to look after indigent families. Later she became its community organizer, tasked with educating and training communities.

By 1986, however, its operation ceased. Francisco continued her work in community organizing, this time for Samahan ng Maralitang Kababaihang Nagkakaisa (Samakana), an association of urban poor women, where she volunteered from 1987 to 1999. She later helped found its local chapter in Iloilo.

“I was asking myself if I’m certain of becoming a full-time organizer because progressive organizations are more on volunteer work. We are not paid to do the job but it’s more of a commitment to serve the women and the people,” she said.

Organizing for a bigger fight

In 2000, she began her work as a campaign officer and later chairperson of Gabriela Panay-Guimaras. This allowed her to work for more communities, educating them about social issues and why the country remains poor.

This is how her commitment to uplift the lives of the communities she is working with has deepened and strengthened.

At first, her family was opposed to the path she had taken, finding no financial gains from it. Her mother even said she was crazy for taking on the volunteer work at Gabriela but later on, through her hard work, her family came to accept and support her work.

“Later on, when my family saw that people come to Gabriela to ask for help regarding issues of abuse, lack of opportunities, and more, they even refer the organization to people they know who were also victims of these injustices,” Francisco added.

Fighting for gender and consumers rights

It was in 2016 that Francisco was included among the nominees of the Gabriela Women’s Party. Hailing from the Visayas region, she said she hopes that she can play a role in gathering sentiments of women on the ground and representing them before the halls of the House of Representatives. This while they are facing red-tagging and attempts at disqualification.

These days, however, the partylist system has become swamped by political families and big businesses.

“But we are not like them. We are committing to serve the marginalized sector so they can have a voice in the congress,” she said.

In the upcoming elections, Francisco hopes that the Filipino people will choose candidates who have genuine concerns for the people, especially the marginalized. (JJE, RTS, RVO)