Ka Paeng and his continuing fight for the toiling masses 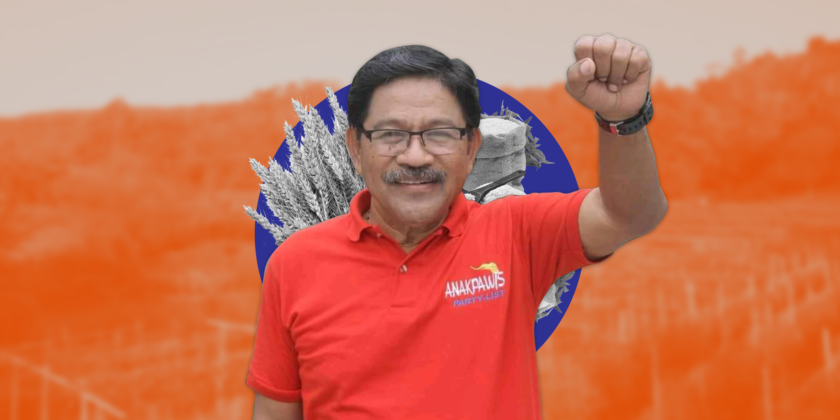 MANILA – For more than four decades, Rafael Mariano, 65, has been persistent in fighting for the rights of Filipino farmers. His struggle has brought him from community organizing to the parliament of the streets, to the halls of the House of the Representatives, and eventually a stint at the agrarian reform department.

He survived the Marcos dictatorship and the Mendiola Massacre. Amid consistent attacks not just against him but also against the sectors he represents, Mariano, more known to many as Ka Paeng, continues to fight.

This year, he is seeking to return as a lawmaker as first nominee of Anakpawis Partylist which seeks to represent farmers, workers, fisherfolk, national minorities, and the urban and rural poor in the House of Representatives.

“These attacks have pushed me to strengthen my commitment to the peasant movement. Never did I lose my faith. It was a crucial time for me to reinforce my determination and my decision to be a peasant leader,” he told Bulatlat in an interview.

A farmer and a leader

Mariano’s family hails from Quezon, Nueva Ecija. His family tilled land to make a living and so he grew up witnessing the poor conditions of Filipino farmers, including their landlord who would take away a big bulk of their produce, leaving his father a very small portion of the harvest.

“We tilled more than two hectares of land that we do not own up until today,” Mariano said..

His father influenced him to read and would even memorize the Philippine Constitution. But when his father fell ill, Mariano was forced to stop attending college and began to shoulder the responsibility of being the family’s breadwinner as a full-time farmer.

He said jokingly that he developed all forms of athlete’s foot since he worked in the field. However, the political situation, including him being a victim of President Ferdinand Marcos’s Masagana 99, pushed him to become an organizer and a peasant leader.

Masagana 99 is an agricultural program under the Marcos dictatorship, which, according to Kilusang Magbubukid ng Pilipinas (KMP) swelled grain production costs by 89 percent and buried farmers in debt. It was launched in 1973, supposedly aimed to increase rice production by offering highly-subsidized loans to farmers to buy fertilizers and invest in equipment.

“We have to use all sorts of chemicals for our crops and we have to try different rice varieties, following the establishment of International Rice Research Institute, all of which had tormented us, and pushed our agricultural banks to bankruptcy,” he said.

Mariano’s parents were supportive of his decision to become a peasant leader. So did his wife Lita Mariano (who is with women farmers group Amihan) and their three children and their respective families.

He was eventually elected as second regional vice-chair of Alyansa ng Magbubukid sa Gitnang Luzon (AMGL) in 1983. Two years later, he became the secretary-general of KMP. He also served as the vice chair and acting chair of KMP, followed by his being chair of Bagong Alyansang Makabayan (BAYAN) from 1998 to 2004.

He was also a three-term lawmaker for Anakpawis Partylist.

As a leader, Mariano is known for his sharpness in speech and fluency in data, all crucial to asserting the agenda of the farmers and the marginalized sectors.

Under President Rodrigo Duterte, Mariano was appointed secretary of the Department of Agrarian Reform (DAR).

This was supposedly part of President Duterte’s attempt to reach out to the Philippine left. Mariano, however, was not confirmed by the Commission on Appointments which consisted of lawmakers belonging to landed families. But his short stay made a dent.

For the first time, DAR literally opened its door to farmers, allowing protesting farmers to be met and accommodated.

He also led the distribution of 358.22 hectares of land to the farmers, despite being contested by big real estate companies, including the Tarlac Development Corporation (TADECO), which filed a petition for reclassification.

“I organized ocular inspections and I personally saw that there is no development that happened in the area. I stood my ground to retain the classification of the lands as agricultural, prompting me to deny their petition,” he said.

In February 2017, Mariano arranged for the 737 hectares of the long-contested Hacienda Luisita lands in Tarlac to be included in the government agrarian reform program.

He also facilitated the creation of guidelines for farmers who cannot claim land ownership due to unclear and insufficient guidelines. Under the Administrative Order No. 8, series of 2018, these guidelines were made to simplify the acquisition of the Certificate of Land Ownership Award (CLOA) to the farmers as agrarian reform beneficiaries (ARBs).

Under his watch, the Genuine Agrarian Reform Bill (GARB) was made a priority bill and was included in the administrative agenda of the Philippine Development Plan 2017-2022.

These victories, however, were cut short when the Commission on Appointments (CA) rejected the ad interim appointment of Mariano in 2017.

“We can see that the will of Duterte to genuinely fight for farmers are not in place. He can easily tell his allies to approve the appointment. Hacienderos and landlords also made their moves just to set us aside,” he said.

Shortly after the rejection of his appointment, free land distribution was no longer a part of the Philippine development plan.

“I have a firm grasp on the conditions, problems, demands, and the solutions to the perennial problems of the farmers,” he said.

Apart from his calls for genuine agrarian reform, Mariano also demanded justice for extrajudicial killings of farmers. Among them was Eddie Gumanoy of the Katipunan ng mga Samahang Magbubukid sa Timog Katagalugan (KASAMA TK) who was killed while holding a fact-finding mission in Mindoro Oriental

He was also very critical of the killing of peace consultant and agrarian reform advocate Randall Echanis who was murdered inside his rented apartment.

With the upcoming elections, Mariano is also seeking to debunk claims that the administration of the father of presidential candidate Ferdinand Marcos Jr. was a golden era.

“A lot of farmers were buried in debts, even our family was affected by this devastating program,” Mariano said, narrating his experience with the Green Revolution program, promoted under the Masagana 99.

Mariano’s historical awareness and experience equipped with firm leadership were more than enough to qualify him as a nominee of Anakpawis Partylist for more than three terms.

When Anakpawis first won in the 13th Congress and was granted two seats, Mariano and Crispin Beltran had the chance to represent the toiling masses. This representation continued until the 15th Congress from 2010 to 2013.

“The upcoming national elections will be a crucial year for Anakpawis to bounce back in the House of the Representatives amid intensified and consecutive attacks against us. We are targeting 1.2 million votes to clinch 3 seats for us. More than this, we aim to fight the looming Marcos restoration and Duterte extension,” he said. (JJE, DAA, RVO)