Lana Linaban: An epitome of a woman unbound 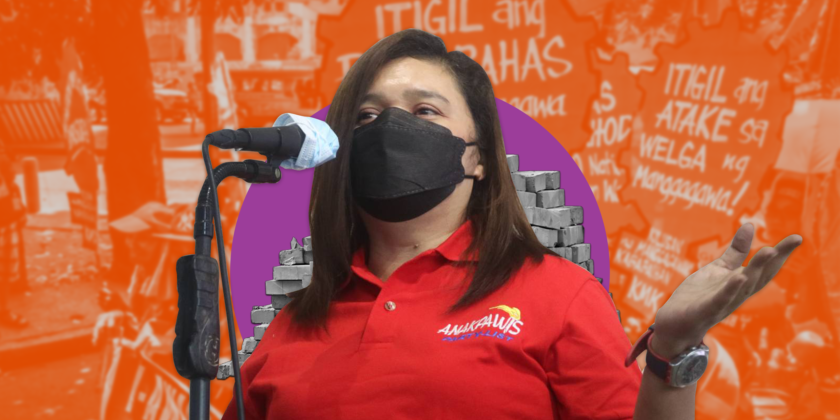 MANILA – On a regular day, women’s rights activist and labor rights advocate Lana Linaban would spend her time attending meetings, leading relief operations, and organizing other programs for the masses. But on her slow day, she finds peace in cooking, gardening, cleaning the house, and watching films.

“For the longest time that I’ve been an activist, I witnessed the power of the toiling masses. It is something to aspire for and that is why we continue to engage and organize them so that they can capacitate themselves to fight for their rights collectively,” Linaban said.

This election, Linaban is the second nominee of Anakpawis Partylist, which will seek representation for farmers, workers, and the poor in the House of Representatives.

Linaban is a mother of two – Lander and Laysa – who both understand her daily routine in organizing. “They both grew responsible, may it be in their personal and academic decisions. I find no problem in juggling community organizing and raising my children at the same time.”

In a virtual interview with Bulatlat, she said that her strength was a product of long-time service to the people, drawing inspiration from their resistance.

Linaban became a student organizer in the progressive youth movement. She served as the national chairperson of the League of Filipino Students (LFS), the leading anti-imperialist organization of the Filipino youth, from 1995 to 1997.

She had a brief stint in union organizing before she joined Gabriela in 2001. She later became its secretary general in 2009. She served as secretary general of Gabriela Women’s Party from 2012 to 2018, and then vice president of the same party in 2019. It was through her experience in the women’s sector that helped her understand the intersectionalities of issues and how it can emancipate the struggling Filipinos.

In 2019, Linaban returned to Kilusang Mayo Uno and served as its secretary for external affairs.

“To be a worker and a woman at the same time is hard and distressing. The majority of the women workers have their own families, whom they need to cater to after their work. A lot of them are also contractual, putting them in a very vulnerable situation,” she said.

When the Anakpawis Party-list convened in 2021, she was elected as the national vice president, and she accepted the challenge to be the second nominee as well.

“As we engage in these elections, we acknowledge the importance of parliamentary struggle in fighting for the rights of the masses. We expand our political engagement in addressing the multiple layers of issues and problems. In our victory, we will be able to diligently lobby laws and policies that would favor the workers and other marginalized sectors,” Linaban said.

If their bid for congressional positions will succeed, Linaban underscored that they will continue to advance the bills that have long been pending in Congress like the increase in the minimum daily wage which the Anakpawis Party-list had been lobbying from 2004 to 2019.

“The same goes for the security of tenure bill, to fight for the regularization of the workers and to terminate all forms of contractualization that abuse the Filipino workers,” she added.

Notably, this bill was vetoed by President Rodrigo Duterte in 2019 despite his promise to end contractualization in his presidential campaign.

Aside from these, they also hope to continue lobbying for paid pandemic leave and other benefits for the workers.

“During the pandemic, the workers have already exhausted their sick and vacation leaves due to quarantine. Most of the time, despite their sickness or exposure to COVID-19, the workers would keep on working because their salary is not guaranteed in the span of the quarantine period,” Linaban said.

The Paid Pandemic Leave Bill or House Bill 7909 has been pending at the Committee on Appropriations for more than a year now, still waiting for the President to certify it as urgent.

Linaban, as a long-time rights defender, has always been a victim of terrorist-tagging. In 2020, she received messages on social media, threatening her life and security.

“I was able to overcome these personal and organizational attacks because of the people around me. Even back when I was a part of the youth sector, I always laid down these problems and threats to my organization so that we can collectively address and resolve them,” she said.

The same attacks were present not only to her but to the party that she is representing in these elections. Anakpawis volunteers were victims of election-related violence, particularly in the Southern Tagalog region.

“This was not new. It was also the same case in the 2019 elections, with our constituents, supporters, and volunteers harassed and obstructed from voting, particularly those in the far-flung areas,” Linaban said.

However, as they protest and condemn the state-sponsored attacks and the election-related violence, Linaban is resolved to see their chapters multiply after the 2019 elections and braved the intimidation, defamation, and black propaganda.

“The challenge for us is to fortify our defense. To tirelessly engage with people, not only to vote for the right leaders but to guard their votes. For sure, the state will attempt to raze us to the ground, so that we would fail to secure the seats,” she said, underscoring their active opposition to the anti-people policies of the government.

“Our determination will prevail and we will overcome all forms of attacks of the state,” she said. (JJE, DAA, RVO)