‘Elections in PH not free and fair’ – int’l observers mission 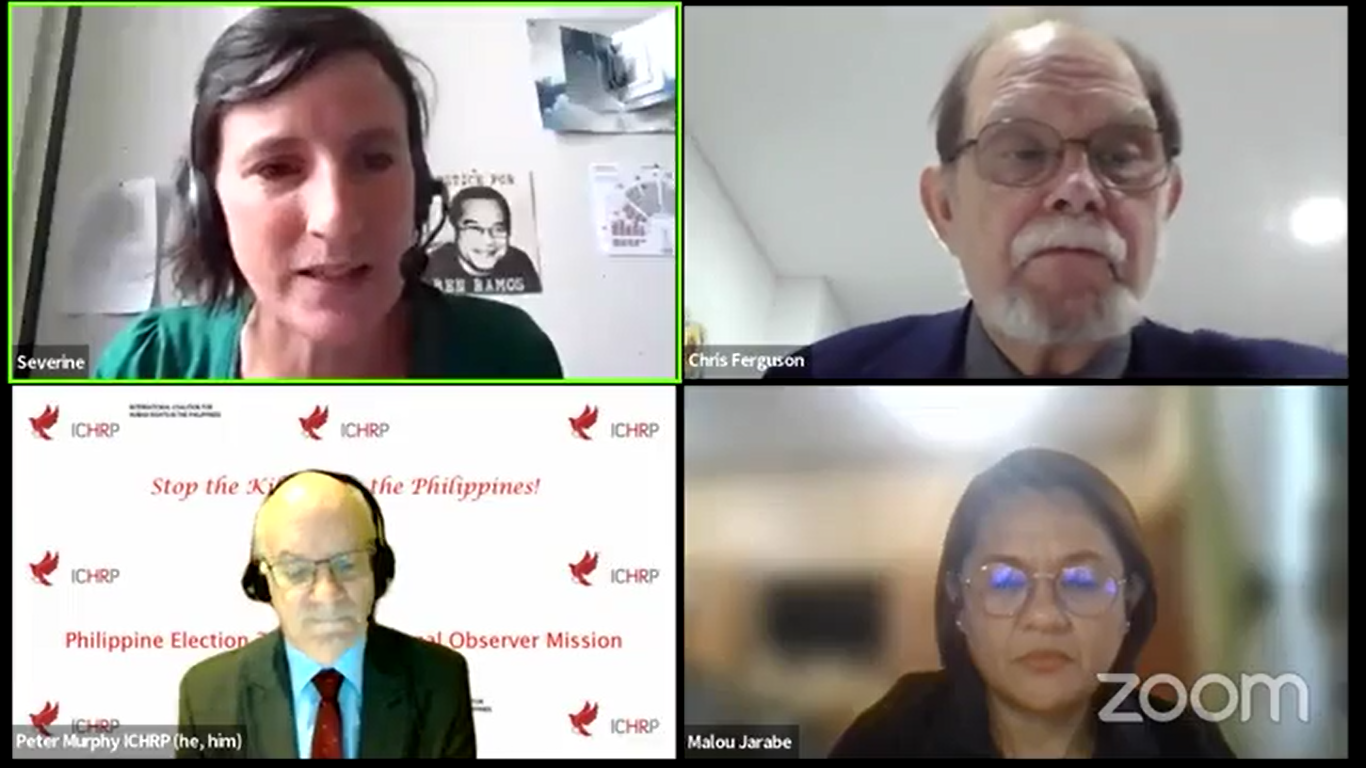 MANILA – The 2022 national election was not free and fair.

This was the observation of the members of the Philippine Election 2022 International Observers Mission (IOM) who documented the conduct of the election from the first week of April until elections day on May 9. Different observers were dispatched in Central Luzon, the National Capital Region (NCR), Southern Luzon, Central Visayas, Western Visayas, and Mindanao.

The group released its interim report on May 19 noting that this year’s elections were “marred by a higher level of failure of the electronic voting system than ever before, along with rampant vote-buying, disturbing levels of state and military orchestrated red-tagging of candidates and parties including numerous incidents of deadly violence.”

IOM Commissioner and Belgian Parliamentarian Séverine De Laveleye said, “These elections are extremely important to both the international community and the Filipino people, but sadly the outcome suggests a continued drift towards repression, state impunity and state terror.”

The IOM noted the intensified red-tagging of the opposition and the progressive partylists and candidates under the Makabayan bloc.

“Red-tagging practices was a common practice during the campaign largely by the military and right-wing candidates in order to vilify opposition candidates. This is an extreme form of disinformation which was used against progressive candidates and the main opposition presidential candidate Leni Robredo,” De Laveleye said.

De Laveleye also said that disinformation and fake news were endemic during the campaign. She cited the fake report that circulated online during the eve of election day that all Makabayan candidates and partylists were disqualified.

The IOM in Central Luzon mission meanwhile identified the spread of fake news through online platforms like Facebook, Instagram, Youtube and TikTok as a major threat to the integrity of the Philippine democracy and the electoral process, said De Laveleye.

The report noted in particular the proliferation of false reports and information about Marcos Jr. and his family ranking from characterization of the martial law period as a “golden age” to historically dubious accounts and false accounts of the provenance of the Marcos’ wealth.

Vote buying was also massive, De Laveleye said. For one, the mission observers in Western Visayas learned participants of the Uniteam rally of presumptive president Ferdinand Marcos Jr. on May 3 received P2,000 ($38).

The report also said that a politician’s representative would conduct house-to-house campaign and give envelopes with money (ranging from P1,000-P1,500 or $19-P29) and goods.

The communities the IOM visited were also highly militarized because of their support for the Makabayan bloc.

“Informants shared that electoral fraud in the city and urban poor areas is very high. The use of 4G: Guns, Gold, Goons, and Girls is very rampant. Girls in particular are hired to dance to political jingles and provide entertainment to distract the public from any meaningful agenda,” the report read.

Dr. Maria Lourdes Jarabe, convenor of Kontra Daya, confirmed the observations of the IOM, saying it is not just the vote counting machines but the entire environment that contributed to the turnout of the 2022 elections.

“The very fact that this has been abetted and the very fact that no less than the government is also party to this disinformation campaign, there is massive vote buying and illegal campaigning, all in all, put this together, there is electoral fraud,” Jarabe said.

Jarabe said she believes that Marcos Jr.’s win is a product of years of massive disinformation campaign.

“He was supported by the political elite and political clans, and highly favoring him was President Duterte himself. Yes he won, the margin is there, 16 million more than the votes of Leni Robredo, but I wouldn’t say that this has been legitimately acquired because this is a product of poisoning the minds of people because of the massive disinformation campaign,” she said.

Cover for past and future rights violations

IOM Commissioner Rev. Dr. Prof. Chris Ferguson meanwhile expressed their concern that the “Marcos-Duterte victory will continue to provide legal and legislative cover for past and future human rights violations, economic plunder and crimes against humanity.”

“The election is both a tragedy and farce of epic Shakespearean proportions, a farce in that the electoral charade was based on a sea of disinformation, disenfranchisement and intimidation of large swathes of the voting public; at the same time a tragedy in that the former dictator’s son and entire family fortune is based on his parents’ theft of billions of dollars from the Filipino people, and this is seen as the solution as opposed to the problem for a country mired in poverty and decades of brutal military control,” Ferguson said.

Ferguson added that the international community should prioritize intensified international efforts to hold the Duterte administration “accountable for its abysmal human rights record, and to increase monitoring of the incoming Marcos administration.”

“This work is underway at the International Criminal Court, and in the United Nations Human Rights Council processes, and can be pursued in national jurisdictions with Magnitsky-style laws. There should be no hint of a blind-eye for continued human rights violations under Marcos Jr.,” Fersugon added. (RTS, JJE)