Why are the powers that be so afraid of our truth-telling? 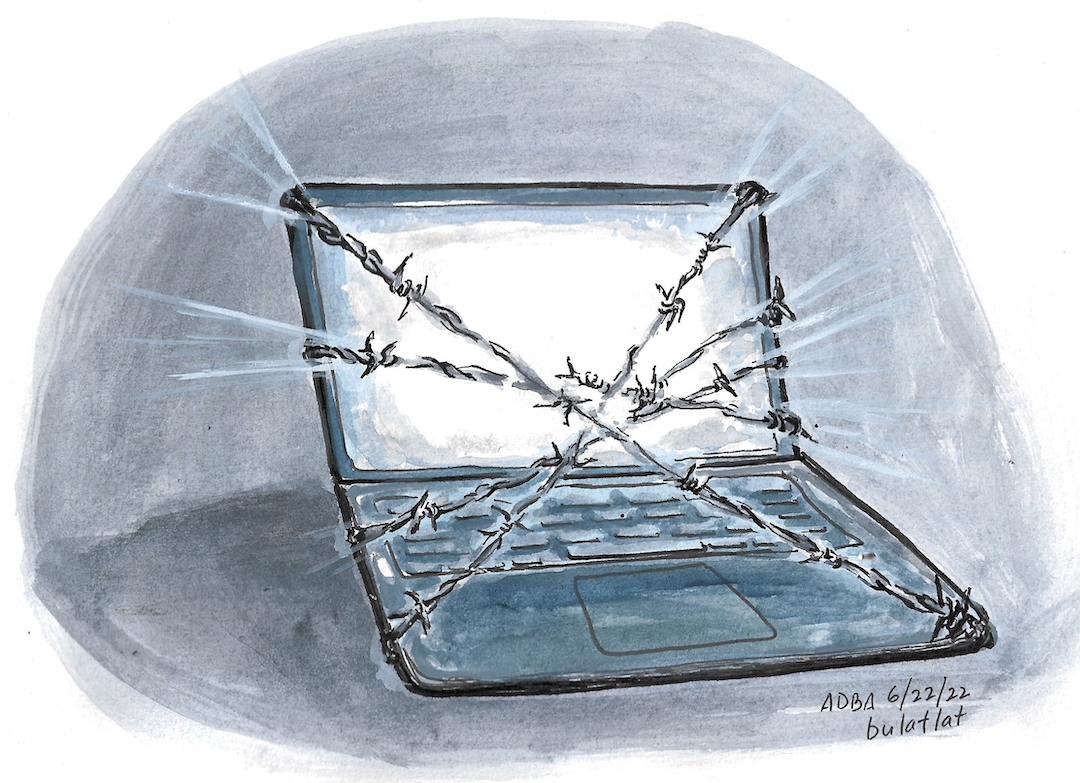 Bulatlat is surprised and enraged upon learning that the National Telecommunications Commission (NTC) issued a memorandum to all internet service providers dated June 8, 2022 directing the immediate blocking of our website, along with 27 others. The NTC cites a June 6, 2022 letter from the National Security Council listing websites “found to be affiliated to and are supporting terrorists and terrorist organizations.”

Bulatlat, the longest-running and award-winning online media outfit and the authority in human rights reporting in the Philippines, condemns this brazen violation of our right to publish, and of the public’s right to free press and free expression. Since June 17, our subscribers using Smart/PLDT as their ISP informed us that they cannot access our website, prompting us to reach out to the IT company to inquire about the incident.

On June 20, Bulatlat also wrote to NTC and the Department of Information and Communications Technology (DICT), asking these agencies to investigate the matter. As of today, we have not received any reply from the two agencies.

The NSC letter, signed by National Security Advisor and Anti-Terrorism Council (ATC) Vice Chairperson Hermogenes Esperon Jr., uses as justification for this censorship the ATC resolutions designating the Communist Party of the Philippines, CPP Central Committee members, New People’s Army and National Democratic Front of the Philippines as terrorists. This is prior restraint against protected speech. It is downright unacceptable as it is based on Esperon’s mere hearsay.

We raise the alarm that such arbitrary action sets a dangerous precedent for independent journalism in the Philippines.

For the past 21 years, Bulatlat has been committed to shedding light on issues that affect the marginalized and the oppressed. These include the struggles of farmers for land, of indigenous peoples for their ancestral domain and right to self-determination, of urban poor for their right to decent housing, of victims of human rights violations for justice, among others. These stories are often underreported or ignored by the dominant media mainly due to their owners’ economic and political interests.

For pursuing pro-people journalism, Bulatlat has been repeatedly red-tagged and subjected to cyber attacks, including a 2021 attack that was traced to the Philippine military. No matter who is in power, we have remained fearless in our truth-telling. We will continue our work while we also consider all legal remedies available to question, and stop yet another state-sponsored repression.

We thank our web host Qurium Media Foundation for mitigating the cyber attacks on our website and for keeping us online via www.bulatlat.org. We also thank Reporters Sans Frontiers for setting up another mirror site so we can be accessed by the public.

We call on our readers, our fellow journalists and the public in general to stand against attempts to muzzle legitimate sources of information.