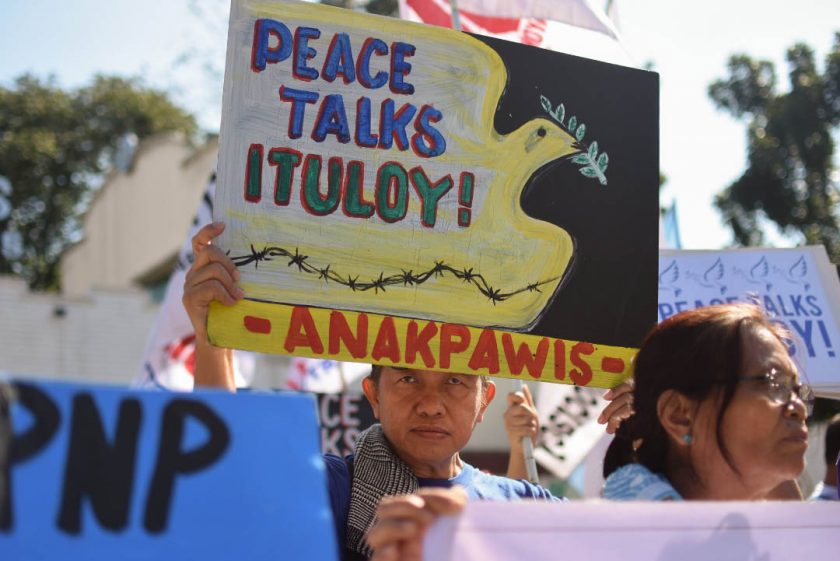 MANILA – Progressives welcomed Sen. Loren Legarda’s call to resume the peace talks between the Philippine government and the National Democratic Front of the Philippines.

In a statement, the National Council of Churches in the Philippines general secretary Bishop Reuel Marigza said that Legarda’s statement at the Senate plenary on Aug. 30 “is a breath of fresh air amid the toxic atmosphere brought about by speeches and public discourses that sow hate and war.”

Legarda made her appeal for the resumption of the peace negotiations with the revolutionary groups after Sen. Francis Tolentino’s proposal for the government to require public officials to disclose relatives who are affiliated with what he called terrorist organizations.

In response, Legarda said that “believing in an ideology which may be different from the majority does not make anyone subversive.” She also noted that the late President Fidel V. Ramos repealed the Anti-Subversion Law in 1992.

Legarda also called for the review of the Anti-Terrorism Act of 2020.

Marigza said they also appreciate Legarda’s remark about Ramos and his contributions to the peace process.

“Even though Pres. Ramos was a soldier, it was during his term that The Hague Joint Declaration for the GRP-NDFP peace process was signed and became the basis and the agenda for the formal peace talks,” Marigza said.

He added that Tolentino’s proposal is dangerous and unjust “since it requires public officials to adjudge their relatives as ‘subversive’ or ‘terrorist’ without due process, on the basis of mere guilt by association.”

The Movement Against Tyranny also expressed their support for Legarda.

“Having been long involved in the peace process, Sen. Legarda walks her talk. Her manifestation was not only incisive and spot on. It is exactly what the country needs to hear and do,” the group said in a statement.

Meanwhile, Bayan Muna Partylist lamented the attack of trolls and red-tagging of Legarda, saying that the NTF-ELCAC’s use of social media platforms to propagate militarist thinking is a waste of public funds.

“This will not solve the country’s problems. Rather, it would only worsen it,” Bayan Muna executive vice-president Carlos Isagani Zarate said in a statement, adding that Legarda has a record of public service and the promotion of peace and justice.

Legarda has worked on the peace process between the Philippine government and the NDFP, particularly in facilitating the release of several prisoners of war.

Under former President Duterte, he unanimously terminated the peace negotiation with the NDFP when he signed Proclamation No. 360 in 2017.

This was followed by a wave of arrests and killings of peace consultants.

Read: Can SC magistrates ‘seek the right balance’? A second look at the highlights of the oral arguments on the PH terror law

With the enactment of the country’s terror law, peace consultants were also designated as terrorists by the Anti-Terrorism Council.

The critics of the ATA have been questioning what they described as the unbridled powers of the ATC in designating so-called terrorists, saying there is no due process. (RTS, JJE)