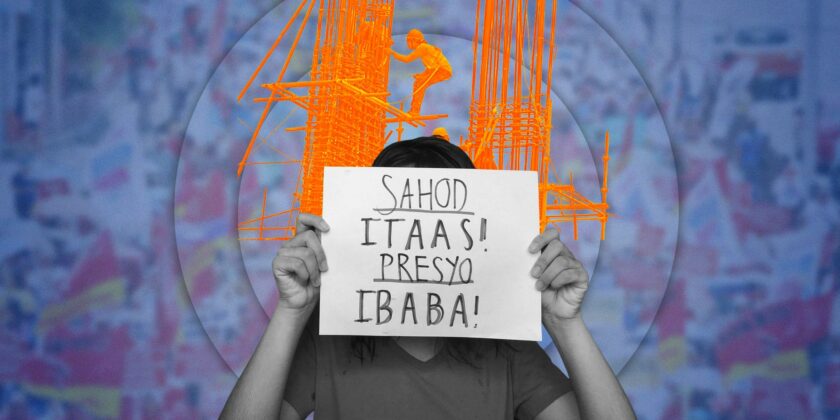 MANILA – For a working student like Jenibeb Gabarda, 22, her daily pay of about P576 ($10.34) in a fast food chain restaurant in Taguig City is hardly enough to keep up with her family’s needs.

“My salary is not enough, especially amid this inflation. Everything is high-priced, from transportation, food, and basic hygiene,” she told Bulatlat.

Last November, the Philippines recorded its highest inflation in recent history at eight percent, bringing prices of staples and basic services to an all-time high.

Workers groups have been calling for a wage hike and the lowering of prices, saying that the pay should be able to cover the needs of a family of five.

As a working student, Gabarda has no choice but to balance her work and studies by attending her class in the morning and going to her shift from noon to 6 p.m. This has become her routine every day.

She has also worked in the same company for almost four years. She was promoted from a service crew to crew and crew Trainor during this time. However, her salary remains nearly the same, with an additional P2 ($0.036) only in her wage.

This, she said, is not enough.

This is despite the long history of Filipino workers seeking significant wage increases in past administrations.

For the past 20 years, research thinktank Ibon documented that labor productivity or actual economic output per labor hour continuously climbed, synchronously with the net income of the top 1,000 corporations in the Philippines, peaking at P1.6-trillion ($0.029-trillion) by 2018. However, throughout the years, the real minimum wage in NCR had only a marginal increase of P44 ($0.79).

During the dictatorship of Marcos Sr., labor unionists joined protest actions under the banner of the National Federation of Labor Union (NAFLU) as they campaigned for union rights. NAFLU was later recognized by the Human Rights Violation Victims’ Memorial Commission for its information campaigns that exposed the dire workplace conditions of Filipino workers.

As such, Marcos Sr.’s crackdown targeted labor unions, with leaders either ending up imprisoned or killed.

“The main issue is the problem in the Labor sector, the criminalization of unions because that is the time of Martial Law and other human rights violations” Jerome Adonis, secretary general of KMU, told Bulatlat.

Under Corazon Aquino, Adonis said Filipino workers were only earning about a dollar a day. About 700 workers’ unions held a strike as they joined “welgang bayan” to push for the P30 ($0.54) increase in the minimum wage.

However, on June 9, 1989, Aquino signed into law the Republic Act No. 6727 or the Wage Rationalization Act, which established regional wage boards that would set the minimum wage in their respective regions, “considering existing regional disparities in the cost of living and other socio-economic factors and the national economic and social development plans.”

Harsher laws such as the Republic Act No. 6715 or the “Herrera Law” were passed to “overhaul the law governing strikes” by imposing stringent requirements, particularly for those in industries that hold national interest.

During the Ramos administration, the minimum wage increased by 23 percent once every ten months. From P118 ($2.12), The first hike was P135 ($2.42), and the second hike was P145 ($2.60). During his term, he deregulated and privatized many industries, according to an article by the New York Times.

It was also under this administration that the Philippine government pushed for contractualization when Ramos signed the Department Order No. 10 in 1997.

During the Estrada Administration, workers demanded wage increases between P40 ($0.72) to P100 ($1.80) in their P195 ($3.50) minimum wage. Reports, however, said he initially refused to legislate the wage increase, and passed on that responsibility to the regional wage boards.

Amid the soaring unemployment then, Estrada saw overseas work as a viable option for Filipino workers, and invested in additional training for them to purportedly enhance their qualification.

During the Arroyo Administration, the minimum wage increased by 12 percent once every 14 months.

According to the Center for Trade Union and Human Rights, “the Arroyo government further liberalized the economy and formulated laws and policies that had ordered the entire country to foreign trade and investments.” Additionally, during her nine years of presidency, unemployment increased from eight percent to 11.2 percent.

The CTUHR added that contractual work ballooned under this administration, accounting for 44.6 percent or nearly half of employed Filipinos. This labor scheme, the group said, keeps workers from being covered by laws on their right to unionize and collectively bargain for their wages and other benefits, to name a few.

Ibon Foundation then said that there was a widening gap between wages and cost of living, from P257 in 2001 to P535 by 2008, just before Arroyo’s term was over.

There were also “no clear guidelines how wages are fixed except for broad bases of cost of living in each region, thus fixing of the minimum wage become more political rather than based on the actual needs,” said the CTHUR in their study.

During his term, the regional tripartite wage and productivity boards were explicitly tasked by the government to issue wage orders supposedly linked to productivity. However, labor groups disproved this, stating that this is just another “deceptive way of denying workers a living wage.”

A 2020 data from the think tank Ibon Foundation revealed that former President Duterte implemented the slightest wage increase among the last six Philippine Presidents after the ouster of the late dictator Marcos Sr. The COVID-19 pandemic has also brought “outright joblessness, underemployment or hopelessness,” affecting about 3.20 million workers.

“There is a mandate that the government should increase the wage yearly, depending on the inflation, with or without the workers’ petition. However, this does not happen, and all administrations, especially Duterte, are stingy,” said Adonis.

Under the present administration, there remains no clear stance on the increasing calls for wage increases as inflation hits an all-time high. He will wait, he said, for the economy to recover from the pandemic before pushing for a wage hike.

This is despite the fact that the minimum wage has never really met the needs of Filipino workers and their families in the past decades, said Adonis. Such has since pushed many Filipinos to look for work overseas, including jobs that are dangerous and put them in vulnerable situations.

Read: From Marcos Sr. to Jr. | In the Philippines, more than half a century of labor migration has led to nowhere

Without a wage increase in sight yet, Filipino workers suffer the most with the inflation rate surging from 6.1 percent in June to 8 percent in November last year.

“The decline in employment and rampant job informality combined with surging prices and low incomes will make the holiday season and new year difficult for many poor and vulnerable Filipino families,” said Ibon Foundation.

As of December 28, most agri-fishery commodities have increased their prices significantly. According to the Department of Agriculture’s Bantay Presyo, from November to December, the cost of imported round scad (galunggong) increased from P190 ($3.40) to P260 ($4.65) while the indian mackerel (alumahan) had a 20-percent increase from P300 ($5.37) to P360 ($6.44).

On the other hand, vendors and consumers decried the price surge for spices such as the local red onion, which had a 177 percent price increase from P180 ($3.22) last month to P500-600 ($8.94-$10.73) per kilo. Last August, it can be remembered that the Department of Agriculture confirmed that there is a shortage of white onions in the public market due to high price.

The research group lamented that the all-time inflation and unlivable salary pushed the family living wage higher in the country’s regions.

“How can a family of five survive if the real value of this minimum wage only constitutes P400? This amount is not enough since the inflation is very high,” said Adonis.

Adonis discussed the situation of the workers and their families amid the worsening crisis. He stated that some workers migrate to the metro aspiring for better salaries; however, their expenses also increase because of bills, food, house rentals, and more.

“The workers are deeply in debt. They need to borrow since they have not yet received their salaries, but once they do, they will be allocated for their basic needs. And since they don’t have money to pay their debts, they need to owe money again as payment for their previous loans,” said Adonis.

He added that this becomes a cycle that affects the workers’ families. Most out-of-school youths comprise workers’ children, who are also experiencing malnourishment due to a lack of healthy food consumption. Instead, they eat noodles, canned goods, salty anchovies (bagoong), and eggs – which are also one of the products with the highest cost these days.

Ibon noted a nearly half-million drop in employment from September to October 2022. The research group debunked the National Economic and Development Authority (NEDA)’s statement that the country’s “upbeat labor market” is leading to a strong economic recovery from the COVID-19 pandemic. IBON stated that this is an exaggeration since there has been a significant decline in employment and a growing number of discouraged workers.

Workers unite in the fight for wage hike

For Adonis, unions are essential to ensure that their constitutional and labor rights will be upheld because they can gain bargaining rights. Through the massive strike joined by approximately 700 workers and other progressive individuals, an additional P25 ($0.45) was added to the workers’ wages during Cory Aquino’s administration.

“Like a broomstick, workers are stronger together under a union. Capitalists will have a hard time refusing the calls of workers. We cannot negotiate individually. Workers need to unite,” said Adonis.

Last September, the Makabayan bloc filed House Bill No. 4898, which seeks to scrap the Wage Rationalization Act and push for a living minimum wage for workers in the country.

“The highly irrational ‘wage rationalization’ or regionalization has led to the creation of over 1,000 wage levels across the country, which are nowhere near the living wage. The national minimum wage that is decent and livable should be back, unlike now that we only have a very substandard minimum wage,” said Gabriela party-list Representative Arlene Brosas.

Workers groups like KMU said the P1,100 family wage is attainable, especially for multinational companies. The Makabayan bill, on the other hand, proposes that the government should shoulder the wage increase for small and micro businesses by realigning the budget for questionable allocations for the government’s intelligence and counterinsurgency funds.

“Even in Marcos Jr.’s SONA, he did not mention any help to our workers. However, we still need to engage with him to heed our calls because it is his mandate, and he should not duck out from his responsibility to the Filipinos,” said Adonis.

Meanwhile, Cassy, not her real name, a cashier for a convenience store, said the rising prices and her low salary have brought her stress. “I think that the proposed P1,000 daily pay would suffice for my family’s needs.”

She then called on Marcos Jr. to heed the calls of the workers. “For Marcos Jr., stop partying. Instead, recognize what the Filipino people really need and allocate our funds to the people’s necessities and in good governance.” (JJE, RVO)