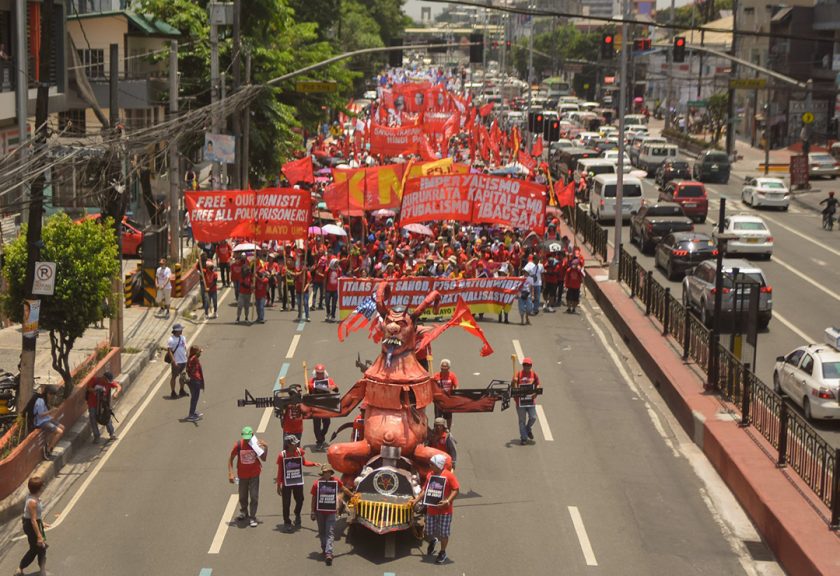 “We have the worst hunger, unemployment, killings and when we protest and organize we are called ‘criminals.’

RELATED STORY: A slice of life of Filipino women workers

MANILA – Under the scorching summer heat, workers and professionals, students, farmers and urban poor gathered from various meeting points in Manila and marched to Chino Roces (formerly Mendiola) Bridge to hold a brief program today, May 1 Labor Day. They delivered a blistering assessment of the Duterte administration’s performance.

“He worsened the neoliberal policies to allow the imperialists and their local cohorts, the big landlords and big compradors, to further squeeze profits from our exploited people”, said Eleonor de Guzman, deputy secretary general of Bagong Alyansang Makabayan (Bayan).

Among these policies is the Tax Reform for Acceleration and Inclusion (TRAIN), which increased the tax take from the workers and the poor especially with the increase in Value-Added Tax. It contributed to the spike of inflation or prices, which the Duterte administration denies. The Labor Day marchers brought placards denouncing the TRAIN law.

Citing the increases in prices and labor productivity, the workers also raised calls for a P750 national minimum wage.

At the Labor Day program in Mendiola, speakers denounced the utter lack of reforms to uplift the condition of the working people. On the contrary, the workers and peasants bear the brunt of the economic growth that hardly benefits them. Kilusang Magbubukid ng Pilipinas Chairperson Danilo Ramos recalled that Duterte had promised “genuine rural development,” a requisite for creating more jobs and sustaining economic growth.

“But Duterte responded differently,” Ramos said. He cited as example the expansion of haciendas and foreign-owned plantations.

“Duterte made no move to distribute land, instead, what we get are massacres of farmers,” Ramos said.

In terms of massacring the farmers and agricultural workers in lieu of implementing an agrarian reform, Duterte has surpassed the deposed dictator, Ferdinand Marcos, Ramos said.

“Puro paandar,” (Pure braggadocio) Reyes, said, summarizing what they regard as the latest attempt of President Duterte to recover a semblance of appearing he is defending the country’s interest against foreign impositions. Reyes was referring to the recent noises made by Malacañang against Canada’s trash.

It took three years before the Duterte administration made mention of the fact that the Philippines had won its arbitration case against China regarding the West Philippine Sea, Reyes said.

If the Duterte administration is belatedly trying to echo some of the peoples’ calls to defend our territory against China, it’s because they can feel the people’s contempt for their mendicancy, Reyes said.

Leaders of progressive people’s organizations urged the public not to swallow what they described as nonstop stream of lies and fake news coming from the Duterte government and its state forces.

They clarified that, because the Filipino people remain extremely exploited and oppressed under the “US-Duterte regime,” prompting the people to resist, criticize and fight, they become targets of attacks of this administration.

“These attack, killings, harassments, vilification – – all under whole of nation approach of the US-Duterte regime, are being committed in hopes of silencing activism or opposition. All in the name of maintaining the exploitative semi-colonial system,” de Guzman said.

“Though fearsome, we have no other recourse but to struggle and frustrate state fascism,” De Guzman said.

The Labor Day protest highlighted the burning of Duterte effigy.

“True, the workers’ situation under the US-Duterte regime is gruesome – we have the worst hunger, unemployment, killings and when we protest and organize we are called ‘criminals,’ said Jerome Adonis, KMU secretary general.

But there is hope, he said. “A national democratic revolution is the answer if we want to end this suffering,” Adonis said.

He urged the gathered workers and supporters from students and professionals, urban poor and peasants, that it is “important to continually expand the people’s organizations.”

“Sagad na, kinamumuhuan na ng taumbayan, isolated na ang Duterte government,” (The people are fed up. The people despise the Duterte government. It is isolated from the people.) Adonis said. He concluded the Labor Day program with a tribute to the 50th anniversary of the CPP, NPA, NDF, which, he said, is subject to Duterte’s fake news.

“They are not the terrorists, but the AFP and the PNP, who kill unarmed farmers, workers, activists and critics,” Adonis said.

Ramos said the revolutionaries being vilified by the Duterte government actually deserve the people’s support.

Despite the worsening conditions of the farmers and workers, he said, it’s not at all hopeless because “the democratic armed struggle in the countryside is gaining strength and providing improvement in lives of the people there.”