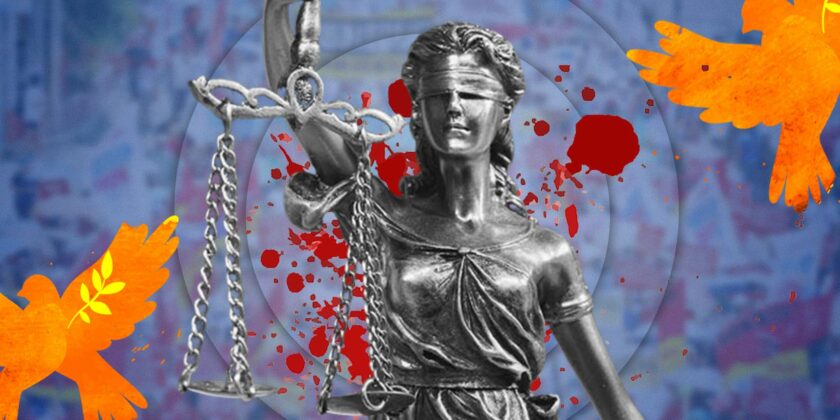 MANILA – Veteran journalist Margarita “Ging” Valle was in line for food at Laguindingan Airport when the police wrongfully arrested her. What followed was a 12-hour detention where she was held incommunicado and suffered hypertension and an asthmatic attack.

She was released eventually after the Philippine National Police (PNP) admitted that it was a case of “mistaken identity.”

Although grappled by fear from her traumatic experience, Valle did not take it sitting down and filed a complaint against the members of the Philippine police and the Army at the Office of the Ombudsman.

However, the complaint against the law enforcers was dismissed.

Valle is only one of the victims of rights violations who availed of the legal remedies available in the country. However, the path to justice using existing legal remedies is often long and leads to dead ends.

In 2020, the United Nations Human Rights Office released a report raising the alarm on human rights violations in the Philippines. The said report interviewed witnesses, family members, and lawyers of human rights victims and noted from these interviews that “practical obstacles to accessing justice within the country are almost insurmountable.”

In the Philippines, victims of human rights violations committed by public officials turn to the Office of the Ombudsman, among others, for justice and redress for its supposed mandate of investigating complaints, including human rights complaints, filed against public officers and employees as an independent government agency.

However, some have expressed their concern and frustration over the Ombudsman’s handling of human rights complaints filed against perpetrators of human rights violations, saying that negative dispositions and slow resolutions have become barriers to justice for these victims.

Valle filed a complaint for grave misconduct, grave abuse of authority, and conduct unbecoming of a public official against members of the PNP and the Philippine Army who were involved in her wrongful arrest and detention.

Substantial evidence for simple neglect of duty was found against two police officers, who were fined an amount equivalent to three months’ worth of salary. Due to not having substantial evidence for grave misconduct and grave abuse of authority, the complaint that was filed on July 4, 2019, was dismissed on August 10, 2020.

“What is clear though is that the scar deep in my psyche will always be there and this will continue to fuel my resolve to seek redress. But like many other cases, some even much worse than what I’ve gone through, the wheels of justice have been exceedingly slow, to say the least, and seemingly so reluctant to turn in favor of the aggrieved, especially for the very least,” Valle told Bulatlat in an interview through email.

The mother of a victim of extrajudicial killing experienced the same predicament.

Defense of the Ancients (DOTA) player Joshua Laxamana was only 17 when he was killed by the police in August 2018. Four years after his death, his mother, Kristine Pascual, continues to search for justice.

In February 2019, Pascual filed a complaint before the Office of the Ombudsman while the PNP’s Internal Affairs Service (IAS) investigated the police personnel involved in Laxamana’s killing. The IAS cleared the personnel of the charges. From filing the complaint to awaiting court calls, Pascual said they followed everything by the book.

Exactly a year after she filed her complaint before the Ombudsman, Pascual received news that the Ombudsman had dismissed her case.

“We’ve gone through the right process. We really advocated what should be done for justice, but justice is cruel here in the Philippines. We already know what was wrong but they still insist that it is right for them,” Pascual said in Filipino.

In the same year, Pascual, through the National Union of People’s Lawyers (NUPL) and Rise Up for Life and for Rights (Rise Up), filed a petition for certiorari before the Supreme Court and demanded that the Ombudsman review her case. The case was dismissed with finality on August 13, 2021.

According to Rise Up’s Leah Valencia, the Ombudsman’s response – a year after filing – was quick compared to other cases. She expressed concern over the expenses that complainants have to pay when filing their complaints despite the absence of a filing fee.

Despite the negative results of her quest for justice using existing legal remedies, Pascual remains hopeful that justice will one day be served for her son.

She credits much of this hope to Rise Up, an alliance she has been part of ever since Laxamana’s death. The alliance was formed during the Duterte administration as a response to the then-president’s war on drugs.

“They gave me hope during times when I was losing it. They also gave us strength,” she told Bulatlat in an online interview.

Before approaching NUPL for legal assistance, it was Rise Up that accompanied Pascual throughout the entire legal process and guided her step-by-step in her search for justice.

“If they [Rise Up] were not around, we would not know what steps to take,” Pascual said.

For Katherine Panguban of NUPL, organizations like Rise Up are important for grieving families and friends of human rights victims.

“The organization is important – when families come together and organize themselves towards one goal of asking or seeking for justice,” she said, adding that this also empowers the victims and their relatives.

Pascual has pinned her hopes on the International Criminal Court’s probe into Duterte’s deadly war on drugs, where Laxamana’s case has been added as a communication complaint.

“Searching for justice is very tiring. I don’t know where else to go,” Pascual said.

ACT Secretary General Raymond Basilio told Bulatlat that he does not know if the response is “slow” or if it is “not moving at all.”

“First, we already did not expect much knowing that the current Ombudsman is an appointee of Duterte. In fact, after several months since we filed this complaint, the Ombudsman has not investigated it. This only shows that we cannot rely on the Ombudsman to act on complaints against government officials,” Basilio said.

NUPL Spokesperson Josalee Deinla of NUPL has clarified that the red-tagging cases will not be dismissed despite Lorraine Badoy’s exit from the NTF-ELCAC.

“Prosecuting cases against former public officers even after their term of office is allowed, for as long as these are filed within the period prescribed by law (reckoned from the time of commission or discovery). Otherwise, a rule mandating that such cases can only be tried during their tenure would shield erring public officers from liability and further contribute to impunity. In our experience, the pursuit of these cases will only be effective if the complainants, who will be witnesses, are prepared and willing to pursue them,” said Deinla.

For Basilio, the delay in the Ombudsman’s response to their complaint is political since the sitting Ombudsman is a Duterte appointee.

“His loyalty is not really to his office. So technically, they’re doing their best to protect Duterte and […] Badoy,” he said, comparing Ombudsman Martires to his predecessor, Conchita Carpio-Morales.

Deinla told Bulatlat that the Office of the Ombudsman has been silent on their reason for the delay in cases’ disposition and that restrictions due to the COVID-19 pandemic will “likely be cited as an excuse.”

However, in the Commission on Audit’s (COA) 2019 audit report, the Office of the Ombudsman’s workforce was flagged for having more “thinkers” than “doers” because of the huge mismatch between low-/mid-level positions and high-level positions.

According to the COA report, this mismatch poses a threat to the Office of the Ombudsman’s delivery of justice.

“The [Office of the Ombudsman’s] core workforce scenario also affects the delivery of [the] agency’s function and mandate characterized by [a] significant number of unresolved cases and/or complaints [carried] over year after year, primarily attributed to the large workforce gaps noted in low and mid-level positions,” the report read.

The COA recommended that the Office of the Ombudsman prioritize hiring more employees for mid- and low-level positions for added manpower for legwork, and to catch up on resolving pending complaints filed before them.

“Victims feel disgruntled because, as the saying goes, justice delayed is justice denied. But they are not without hope. As they are aware of the enduring climate of impunity and lack of effective remedies in the country, they are willing to pursue their cases to the end, however long they may take,” Deinla said.

Bulatlat reached out to the Office of the Ombudsman requesting an interview on this matter but it was denied “due to numerous pressing commitments and Ombudsman information policy.”

Dim prospects and where victims go from here

Even after Duterte’s term, human rights victims continue to seek justice and accountability.

Under the administration of Ferdinand Marcos Jr. – son of the late dictator and strongman Ferdinand Marcos Sr. – progressives and critics are expecting the same response on the people’s clamor for justice and accountability, particularly on human rights violations.

Glaringly missing in Marcos Jr.’s first State of the Nation Address is his plan on addressing the country’s worsening human rights situation, and his vow to continue Duterte’s war on drugs has spurred worries over more extrajudicial killings.

“He did not mention how his administration will protect human rights, so we expect the same under Marcos,” Basilio said.

Basilio stressed the need to act on cases filed before the Ombudsman against government officials and to conduct impartial investigations on these cases.

“The Ombudsman should be pushed to do their job based on what they have sworn and not follow the whims of their appointing officers,” he added.

Despite the dim prospects for human rights victims seeking justice, Deinla said there are other remedies other than filing charges before the Ombudsman.

These remedies include petitioning the courts for the extraordinary writs of Amparo, habeas data, and habeas corpus and taking their fight for justice to the international arena.

“Our clients are taking their battles beyond the courtroom. They are seeking redress from human rights mechanisms in the international arena by, among others, engaging with UN mandate holders and providing reports on the true state of human rights in the Philippines,” Deinla said.

More importantly, Deinla said that their clients are also taking their fight for justice on the streets by joining various political campaigns, adding their voice to the call to stop the killings of human rights defenders, red-tagging, and draconian counterterrorism measures. (AMU, RVO, JJE)