Likewise, the HLI has received a major concession from government to refine 60 percent of imported raw sugar under the General Agreement on Tariffs and Trade (GATT). In fact in Sept. 2003, according to Ambala, CAT refined 250,000 tons of raw sugar imports even before the kabyawan which usually starts early October. This alone belies the company’s claim of profit losses, Ambala says.

From a total land area of 7,200 has. in 1958 when the Cojuangcos acquired the sugar mill and the plantation from its Spanish owners, the agriculture land of HLI now stands at only 4,415.75 ha., Galang said.

The remaining estate is doomed to shrink further. In 1995, 3,295 has. was approved by the Tarlac municipal council and provincial board for re-classification. The re-classified land will pass through the six barangays of Balete, Cut-Cut, Bantog, Lourdes, Central and Mapalacsiao and is for integration in the zoning map of the municipality covering 32,957, 212 sq.m.

So far, 500 has. of agricultural land have been converted into residential and industrial enclaves.

Eventually, with the conversion of a big chunk of the hacienda into residential, industrial and recreational use, only 1,000 has. will be left for sugar plantation.

“Kung wala ng lupang agrikultural, wala na rin kaming trabaho” (Without any agricultural land left, we will lose all our jobs), Galang said. And homes, too. Since the land conversion projects would affect their villages, many families are bound to lose their homes.

Eighty-nine-year old Basillio, who retired in 1983 and is not a beneficiary of the SDO, chuckles and tries to hide his tears over the fact that he has practically lost his claim to the land he had tilled for 56 years. He got himself hired as a casual farm worker in 1927 at the age of 12.

“Kaya masaya ako na nag-strike ulit (ang mga manggagawang-bukid) ngayon” (So I’m glad the farm workers have gone on strike again), he said. He pins his only hope on their collective struggle to finally claim the land that they believe is rightfully theirs.

A former DAR official, Santos, sympathizes with the workers’ plight and believes that Hacienda Luisita estate belongs to the farm workers. In an exclusive interview with Bulatlat, the agrarian lawyer said he is breaking his silence just to emphasize that the farmers are the legitimate owners of the hacienda, citing the legal process involved in the acquisition of the property in 1958 and thereafter. 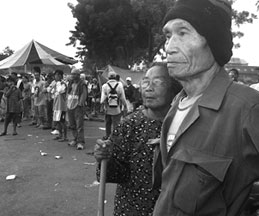 Santos said that when Mrs. Aquino – one of the owners of the hacienda – became president he began to lose faith that the RTC decision affirming the farmers’ rights over the land would ever materialize. The new president had appointed the Cojuangcos’ lawyer in the land case – Sedfrey Ordoñez – as solicitor general.

The Aquino government never pursued the appeal before the CA. The appeals court then dismissed the case in 1988 mainly due to assurances by the new administration that sugar farms would be included in a new land reform program.

Santos believes however that the CA dismissal did not nullify the RTC Manila decision in 1985 that stated that Hacienda Luisita should be subdivided, distributed and sold to the hacienda’s small farmers at cost.

In fact, the CA dismissal-resolution emphasized “it is not only conditional but also without prejudice to the reopening/revival of the case if the conditions of the DAR are not met.”

In his follow-up House testimony Dec. 16, HLI secretary Cochico said the Cojuangcos feared a civil war would erupt among the cane workers if land is distributed, because this would mean allotting good fertile parts of the estate to some, while the uncultivable ones would go to others. The SDO had to be resorted to, he said, to avoid a possible armed feud among the workers.

He may have misinterpreted the actual events. By all accounts, it is the SDO that is now pitting the thousands of workers against the Cojuangcos, resulting in the loss of at least eight lives. (Bulatlat.com)