More than three years after Lafayette, an Australian mining company, wrought havoc on Rapu-Rapu and its neighboring communities, residents are still reeling from the effects of the mine-tailings disaster. And they fear more threats as the mining operations resume.

RAPU-RAPU ISLAND, Albay — The two cyanide-laden tailings spills of the mining operations here in 2005 destroyed the source of staple food and livelihood of residents.

Three years of protests and dialogues initiated by the affected communities and environmental groups forced Lafayette Mining Ltd. of Australia to declare bankruptcy and stop its operations.

But in April 2008, Korean and Malaysian companies took control of Lafayette and the operations resumed. Although there has been no report of cyanide-laden spills since the resumption of mining operations, the residents of the 13 barangays (villages) of Rapu-Rapu island are again facing threats of environmental degradation, health risks, human-rights violations and loss of livelihood. Another battle is imminent.

The town of Rapu-Rapu consists of three islands, namely Rapu-Rapu, Batan and Guinanayan. The seat of the Rapu-Rapu government is on Rapu-Rapu Island. The province of Albay lies within the country’s typhoon belt and a major fault line, making Rapu-Rapu prone to natural disasters and earthquakes. 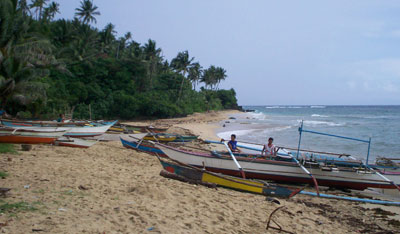 Magayon (Beautiful). The shoreline of Tinopan, Rapu-Rapu, Albay. Two fishermen are busy preparing to sail the following morning, hoping to catch malasugi or blue marlin, a type of tuna that Rapu-Rapu is known for. (Photo by Janess Ann Ellao/Bulatlat.com)

The communities in the municipality primarily derive their livelihood from fishing. The town is known for its malasugi or blue marlin. Aside from this, the residents occasionally earn from selling abaca (Manila hemp), coconut and other farm products. The residents of Rapu-Rapu share their rich marine resources with the neighboring communities in Sorsogon and Catanduanes provinces. The island also lies in the migratory route of the butanding , the famed whale sharks of Donsol, Sorsogon.

The mining operations of Lafayette, which had 80 percent of mining claims in the eastern part of Rapu-Rapu island in mid-2005, generated protests from the residents. They had said early on that open-pit mining would cause environmental degradation, health risks and loss of livelihood. They were proven right after the two tailings dam of the mining company burst in October 2005, wreaking havoc on the communities.

Fish were found dead in the creeks and throughout the shorelines of Rapu-Rapu. Residents from other cities and towns refused to buy fish caught near the island for fear that these might be contaminated with cyanide. Without their main source of livelihood, widespread starvation took place. Children were most affected as they are more vulnerable to sickness, even death.

The residents were still recovering from the impact of the disasters in October 2005 when another fish kill was documented in October 2007. This generated more protest actions from the communities and environmental groups. Before that year ended, the Board of Directors of Lafayette decided to close down the operations, saying they were unsuccessful in their effort to recapitalize to keep the mining project going.