Jeepney Drivers as Milking Cows of ‘Crocodiles’ in Arroyo Administration

In justifying the sharp increases, the government cited the need to discipline drivers and help improve traffic. But according to Piston, most drivers are not buying it. “In general, we view this as a money-making scheme,” Piston chairman Steve Ranjo said in Filipino. “Whether the enforcers who apprehended the driver came from LTO, MMDA or local government, past experiences showed that all these are aimed more at increasing the revenues of the government rather than solving traffic woes.”

”They do not make laws to solve the traffic problem. What they report yearly are the revenues they generated from fines and penalties for traffic violations. They could not report the correlation of the increased collection of fines with the easing of the traffic situation,” Ranjo said.

“Traffic hasn’t improved with the fines. Traffic has worsened and more accidents have occurred. In fact, if their revenues from fines have been increasing, it means more drivers are being apprehended and there are still a lot of traffic-related problems,” Ranjo said. 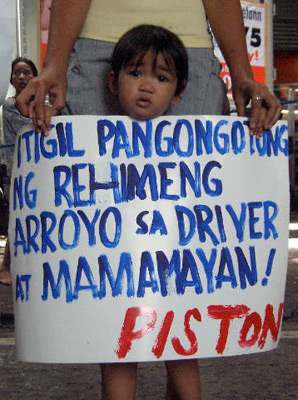 “Blaming the drivers and imposing fines when they make ‘mistakes’ to cope with the traffic are apparently not the solution. But even if, for arguments’ sake, public utility drivers are the sole party at fault in the worsening traffic,” Ranjo said, “the government’s lopsided focus on the drivers’ role conveniently sidesteps the government’s grave inaction in dealing with the internationally recognized three E’s concerning traffic: ENGINEERING such as infrastructure, EDUCATION for drivers and pedestrians and ENFORCEMENT involving both traffic enforcers and drivers.”

He added that “now, practice evidently shows that the Philippine government is not only wanting in the engineering and education aspects of mass transportation and traffic, it also unfairly emphasizes on the side of the drivers, and within that side, the toiling masses in mass transport. The new, higher fees showed its bias against drivers of vehicles for hire.”

Further bolstering their charge that steep fines are being imposed mainly to increase government revenues in the face of its chronic fiscal deficit problem, Piston pointed to the “multi-colored crocs” preying on drivers of Metro Manila.

Although all of them enforce traffic rules, each has its own set of rules and schedule of fines/penalties. When they disagree, they disagree at the expense of the apprehended drivers. For instance, municipalities don’t recognize the tickets or laws/ordinances imposed by other municipalities. The MMDA and LTO, for its part, also don’t recognize the tickets or ordinances imposed by local governments’ traffic enforcers. (At least the MMDA and LTO have signed a memo of agreement to respect each other’s catch.)

On roads that historically never expanded or improved as fast to accommodate the three to four, sometimes as high as nine, percent increase in vehicles per year, drivers fall prey to bribe- and penalty-seeking traffic enforcers. In a culture of enforcement that bashes driver more than the transport system, drivers are considered guilty when apprehended. If a driver protested the charge being slapped against him, Ranjo said, the premise of his adjudication is “prove that you’re not guilty.”

But the apprehending officers themselves are hardly paragons of discipline and objectivity. “If traffic enforcers were disciplined, you can’t get past them with bribes, and the traffic problem would have been solved,” Ranjo said. “If traffic enforcers can’t be bribed, there’d be fewer violators of traffic rules. But due to entrenched bribery, it’s useless to raise fines.”

Useless for improving traffic, but useful for a government with a chronic fiscal crisis, and, according to Piston, useful as well for traffic enforcers willing to accept bribes and write off the driver’s violation. “If you raise fines/penalties, the bribe the driver has to pay will also just increase,” Ranjo said.