You Are Here: Home → 2009 → June → 20 → Torture Survivor Turns Over a New Leaf as He Weds Sweetheart, Vows to Continue Fighting for Justice

Torture Survivor Turns Over a New Leaf as He Weds Sweetheart, Vows to Continue Fighting for Justice

MANILA — Today, June 20, members of the organizations of victims and relatives of victims of human rights violations, Desaparecidos and Hustisya! as well as the human rights alliance, KARAPATAN, turned out in a jubilant mood to show their support to the wedding of torture survivor Raymond Manalo, and his sweetheart, Kristel Alminiana, in a simple ceremony at the St. Andrew’s Theological Seminary in Quezon City.

Raymond marks this event as another milestone in his life with the full support of human rights advocates as they stood as his and Kristel’s entourage, namely: Senators Jamby Madrigal and Chiz Escudero, House representatives Satur Ocampo, Liza Maza, Rafael Mariano and Erin Tañada as principal sponsors. Human Rights Commissioner Leila de Lima, Raymond’s lawyers Rex Fernandez and Jose Manuel Diokno, Karapatan secretary general Marie Hilao-Enriquez, also stood as ninongs and ninangs with Mrs. Edita Burgos and Mrs. Connie Empeño. Other members of the entourage include relatives of the desaparacidos, such as Mr. and Mrs. Asher Cadapan and Mrs. Lolita Robiños.

Fr. Dionito Cabillas, member of the national council of Karapatan, officiated the ceremony. 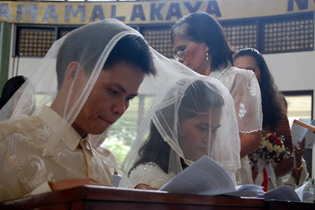 Raymond Manalo, together with his brother, Reynaldo, was abducted on February 14, 2006, tortured by members of the military and kept in incommunicado detention for 18 long months until his and his brother’s escape in August 2007. He was also witness to the torture of UP students Sherlyn Cadapan, Karen Empeño, their companion farmer Manuel Merino and other individuals while he was in captivity.

Since his escape, Raymond has told his story to the world, even testifying before the United Nations Committee Against Torture in Geneva this April. He has assisted the families of the desaparecidos search for their loved ones. His testimony is proof that the Armed Forces of the Philippines is behind the extrajudicial killings and enforced disappearances of many activists. His story led to the identification of and excavation, with the Commission on Human Rights and Karapatan, at a former military camp where burned fragments of human bones, believed to be Merino’s, were found.

While waiting for protection to be granted in his petition for the writ of amparo, and for the decision of the Ombudsman and Regional Trial Court where he filed charges against the notorious General Jovito Palparan, Jr., identified as one of the perpetrators of his capture, Raymond has been participating in the people’s movement as a member of Hustisya! (Victims of Arroyo Regime United for Justice).

Love in the midst of searching for justice

Raymond met Kristel Alminiana, 23, while he was in sanctuary following his escape. Their friendship grew as Kristel learned to understand what Raymond has gone through and what he is now fighting for. 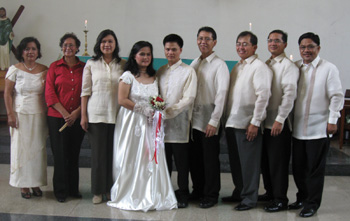 The newlyweds with their ninongs and ninangs (Photo from Karapatan)

Despite the threats and risks surrounding Raymond, Kristel chose to be with him and to support him in his struggle for justice. She, a girl with simple dreams, has stood by Raymond as he recounted his ordeal in the hands of his captors.

Raymond would still be bothered by horrible dreams at night, but Kristel would be beside him, waking him up and assuring him that it was all a bad dream.

The couple is blessed with a healthy baby boy born on Easter Sunday this year, just a few days before Raymond flew to Geneva. Tomorrow will be their first Father’s Day together as a family.

“Gusto kong magkaroon ng tunay na hustisya at seguridad, para na rin sa pamilya ko, anak ko at magiging anak niya (I want to have genuine justice and security, not only for myself, but also for my family and child, and for his future children as well), Raymond said.###

DISCLAIMER: The press releases, statements and manifestos published in this site do not go through Bulatlat.com’s editorial process. They are published as is and their authors are solely responsible for their content. These materials do not reflect Bulatlat.com’s policy or position.